Shout Factory // Unrated // December 3, 2013
List Price: $249.95 [Buy now and save at Amazon]
Review by Stuart Galbraith IV | posted December 29, 2013 | E-mail the Author
If one TV show seemed least likely ever to be released to home video, Mary Hartman, Mary Hartman (1976-77) would have been a prime candidate. Instead of the usual one-episode-per-week, 26-episode season run, Mary Hartman, Mary Hartman, patterned after daytime soap operas, ran in 30-minute segments five-nights-per-week, Monday through Friday, though typically it aired at 11:00 or 11:30 at night instead of the middle of the afternoon. The series lasted just a year-and-a-half, with a daunting 325 episodes produced during that short period. It was, 35 years ago, a highly-regarded cult series but one that has all but vanished in the years since. In other words, in the eyes of most home video producers, Mary Hartman, Mary Hartman was marginal yet voluminous. No I Love Lucy, this.

Usually described as a parody of then-popular, network-produced "daytime dramas" but really an almost indescribable subtle satire of suburban American blandness and consumerism, Mary Hartman, Mary Hartman was genuinely subversive, as rare a feat in that vast media wasteland as Ph.D. graduates and scientists at a Tea Party rally.

Though it plays better if you were around back in the ‘70s and remember the conventions of network soap operas, Mary Hartman, Mary Hartman has aged astoundingly well, better, certainly, than most of executive producer Norman Lear's more famous ‘70s shows. Though Lear dominates then as now, Gail Parent and Ann Marcus were its primary writers, with Joan Darling, another woman, directing about half its episodes. 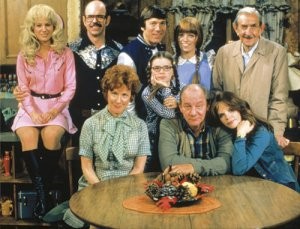 A multi-camera series shot on tape like a regular soap, minus studio audience and canned laughter, the show follows the trials and tribulations of Fernwood, Ohio suburban housewife Mary Hartman (Louise Lasser, former wife and collaborator of Woody Allen), a vaguely dissatisfied, TV-addicted woman trying to fill the emotional void in her life by living up to middle-class corporate and societal expectations. Such expectations preoccupy her thoughts, particularly concerns over a "yellow, waxy build-up" on her kitchen floor. Even news of the mass murder of a family of five (and their two goats and eight chickens) a few streets away can't faze her.

Then again, even Mary's friends and family are strangely yet believably desensitized, intrigued as they are by the senseless slaughter of the animals. "And the people," corrects Mary. "And the people, of course."

Mary lives with her unfaithful husband, Tom (Greg Mullavey), who rationalizes his constant refusals of Mary's pleas for sex, or even any serious conversation about it. They're unaware their teenage daughter, Heather (Claudia Lamb) in fact witnessed the murder of the Lombardi family (and their two goats and eight chickens), and are equally oblivious to the increasingly bizarre behavior of Mary's father, Grandpa Larkin (Victor Killian, Unknown World), revealed in the first episode to be the notorious "Fernwood Flasher."

Martha Shumway (Dody Goodman) is Mary's eccentric mother, who talks to her houseplants and provides the voice crying out "Mary Hartman! Mary Hartman!" over the opening titles. (Reportedly, this title was chosen on the grounds that everything in an American soap opera is stated twice.) Debralee Scott plays Cathy Shumway, Mary's sexually promiscuous sister; and Bruce Solomon is police Sgt. Dennis Foley, the desk cop Mary meets after her father's first arrest for indecent exposure, who clearly pines away for the married housewife.

Part of Mary Hartman, Mary Hartman success lay in its utterly deadpan approach. It plays like a parody of soap operas because it follows the form so exactly, to the point where those not in on the joke might at first mistake it for a genuine article. Certainly it's no more ludicrous than all the other afternoon soap operas airing during Mary Hartman, Mary Hartman's brief run. In many ways it's the antithesis of Mel Brooks's broader, concurrent movie genre spoofs (Blazing Saddles, Young Frankenstein, etc.). The five-episode-per-week format allowed storylines and characterizations to evolve at a deliberate pace, and in such a way that the deliberate, methodical inanity became part of the joke.

The grind of producing two-and-a-half-hours of new material almost year-round eventually caught up with Louise Lasser, who left the series after 325 episodes, and following a legendary eleven-minute virtuoso performance as Mary suffers a nervous breakdown on live TV, while appearing on The David Susskind Show, a deeply private yet nationally broadcast implosion widely considered one of the finest pieces of acting in the history of the medium.

The series continued on as Forever Fernwood with most of the cast save Mary intact but, without its anchor, it just wasn't the same. Lasser herself opined that Mary was "a survivor in a world that might not be worth surviving in." (One wonders if Lasser's character and the show itself had been reworked as a weekly series, like the more broadly popular primetime network series Soap (1977-81), whether they might have survived.)

The gloriously silly Fernwood 2 Night followed, utilizing the late-night talk show format as a platform for small-town cultural and political vacuousness in much the same manner as Mary Hartman, Mary Hartman had turned the soap opera form on its head, but it too was short-lived, lasting but two summers.

Mary Hartman, Mary Hartman's 38 single-sided DVDs come in a sturdy cardboard box containing six standard-size DVD cases, one thin-case DVD, and a fat, full-color booklet. The discs and episodes are merely numbered, though the booklet contains an episode guide with show numbers, airdates, and brief synopses. Shot on tape, the 4:3 shows are in surprisingly good condition; picture and (mono) audio hold up well. The discs are region 1 encoded and are in English only with no subtitle or closed-captioning options.

The booklet includes a two-page essay by the seemingly ageless Lear (now 91!) and an appreciation by television critic Tom Shales. Lear, Lasser, and Mary Kay Place discuss the series and its impact in "Inside the Funhouse Mirror," a new featurette on the first of two bonus discs. In a separate featurette, Lear and Lasser discuss the famous nervous breakdown episode and Lasser's performance therein. Also included on the two discs are ten complete episodes of Fernwood 2 Night, a series one hopes gets its own complete series boxed set someday soon. It's side-splittingly funny in similar and unique ways; I was as glad to see those again as much as the Mary Hartman, Mary Hartman shows and, like its forerunner, it hasn't aged a bit, either.

Probably because the targets of Mary Hartman, Mary Hartman's satire (insatiable consumerism, celebrity-obsession, television) are more relevant now than ever, the series despite its low budget, now-dated production methods and spoofing of an all but dead TV genre make it seem as fresh and funny as ever. And now it's all here, in one densely compact package. A DVD Talk Collector Series title.