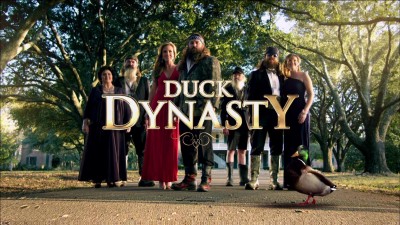 Although I hadn't seen any episodes of "Duck Dynasty" prior to receiving this Blu-Ray set, I couldn't get through too many days without hearing its name or seeing pictures of one or more of the bearded guys associated with it. Lionsgate has now released a mammoth six-disc Blu-Ray collection of the show's first 41 episodes, more than enough to get anyone acquainted with it.

My first question was: Why is it called Duck Dynasty? None of these guys really look like ducks. Well, it's because their family business is making duck calls- those whistle-like contraptions that make a quacking sound that attracts ducks, most often used by hunters. Phil Robertson, being an avid hunter, developed his own style of duck calls and founded the company Duck Commander in 1972. He had a bit of prior media exposure on a few smaller hunting-oriented cable shows in the 1980s and 90s, but Phil's son Willie who now serves as CEO (and executive producer of the show) is credited with injecting the company with stronger business know-how and making it into a "multi-million dollar empire", hence the "dynasty" in the title.

"Duck Dynasty" follows the Robertson clan, who all live in West Monroe, LA, and their activities in and outside of their Duck Commander operation. Phil and his wife, who everyone calls "Miss Kay", live in a modest house on a large property, which the rest of the family visits often and is seen in much of the show. Willie, his wife Korie and their children live in an impressive large estate that is another frequent location. At Duck Commander's office and warehouse, Willie works with his uncle Silas, or "Si" as he's usually called, whose main task is to make the reeds (the parts of the duck calls that make the actual sound). Working on other parts of the duck calls are brothers Jase and Jep, along with two non-family employees Martin and Godwin. Throughout most of the episodes, the names of the persons appearing are shown onscreen making it a bit easier to keep track of who is who.

As big a part as the duck calls are to the Robertsons' livelihood, one would think it would take more than five guys in a room to make all of them, but at least on the show that appears to be how it's done. "Duck Dynasty" doesn't really give an in-depth look at how the family business actually operates or how it became so successful, but focuses more on the people themselves. Most of the episodes jump from goings-on at the company to things happening at home or outside. The first episode gives viewers a good idea of what to expect for the rest of the series, as Willie (who usually narrates the opening and closing of each show) tells us that the family has stayed true to themselves despite the wealth, while brother Jase explains how he prefers to catch his own food: "I don't like meat from the grocery store- it makes me nervous." While Willie runs most of the show at Duck Commander, the rest of the staff takes some matters into their own hands when he's away- their first big idea is to test out their duck calls by flooding the loading dock outside the building and seeing how many real ducks they can attract.

After watching a few episodes, it seems that what makes Duck Dynasty popular is that the Robertsons are truly interesting characters. Phil, the "patriarch" of the family, appears soft-spoken but when he does speak he says what's on his mind (which recently got him into some trouble during a magazine interview, after these episodes were shot.) He says more than once "I'm a low-tech man in a high-tech world." His wife, whom he married at a young age, seems to be a modernized version of a 1950s sitcom wife, spending lots of time in the kitchen and prying into her grandkids' lives (an episode where she invites herself along to a bowling alley gathering and then asks the kids if they've had "the sex talk" with their parents is just hilarious.) Many times she's seen asking "remember when" questions to Phil and he just answers "yep" without actually listening to her. Phil's brother Si, much older than the other primary Duck Commander staff, appears just a little off-kilter as he continuously drinks iced tea from a Tupperware cup he's had since the 1960s when he served in Vietnam and finds things to complain about, while doing "old man" renditions of recent pop songs and repeating younger people's catchphrases like "that's how I roll." 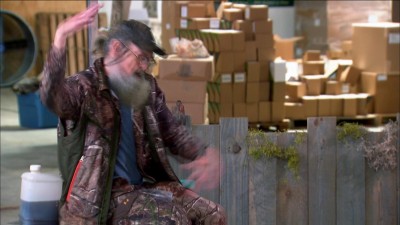 While "Duck Dynasty" is said to be unscripted, the events in many episodes play out like TV sitcoms and I can't help but suspect that things are planned a bit prior to shooting, but some others evoke the phrase "you can't make this stuff up". In one episode, the air conditioning at Duck Commander fails on one of the hottest days of the year, and although Willie tells everyone to keep working they go outside and Si relaxes in an inflatable pool in the back of a truck. Later they put together a "redneck water park" for the family at a lake (because taking them to a commercial water park would be too ‘unsanitary') with rope swings and the like. Another episode has Uncle Si quit his job because he's bored with it, and a new worker is hired to take his place, but you can guess how that one ends. Later Willie tries to force everyone to wear uniforms, which results in them going on strike outside. On a hunting trip, a large beehive is discovered and the guys make a few failed attempts to grab it for the honey, including bringing out a shop-vac.

A few episodes feature the Robertsons' teenage kids, such as Willie's daughter Sadie learning how to drive and Willie taking a potential boyfriend of hers out hunting to test his worthiness. When Willie's son comes over to grandpa Phil's to borrow the boat to take a girl out fishing, Phil comes along with them to ensure that fishing is ALL they do (because when he was their age, fishing was the last thing on his mind), then shows the two of them how to skin and cook their catches. Phil is presented with the task of putting a plastic playhouse together for his younger grandkids, and he tosses the instructions and assembles it as he sees fit. When the girls complain that there's no window where there's supposed to be, he cuts one out himself with a chainsaw.

Two double-length episodes are included- "I'm Dreaming of a Redneck Christmas" (which was also released on DVD by itself) where the family celebrates the holidays at Phil and Kay's house, while Willie plays Santa Claus for some local kids while Si acts as his elf and brings along gifts consisting mostly of office supplies. The final episode in the set has the family vacation in Hawaii, because hey, it worked for the Brady Bunch.

The basic format is typical of other "reality" shows- we don't see any of the crew people interfere with what's going on (although I usually watch carefully for signs of camera people and equipment in the shot, they've made quite an effort not to let them show up here), and later comments from the participants are added in where they reflect on what happened or say things about the others in the scene that they wouldn't have said in front of them, like the Duck Commander employees criticizing Willie's management style. Subtitles appear whenever anything is said unclearly, and details such as license plates or brand names are routinely covered up or blurred in post-production. (I've always found the covering up of brands to be more distracting than just leaving them as-is, such as when the diamond-shaped label on a Tabasco sauce bottle is covered up with plain white paper in the same shape. I can still tell it's Tabasco sauce, if they had left it uncovered I wouldn't have assumed that the company behind it endorses anything in the show and probably wouldn't have remembered it as much as I do now, so why do it?) Most episodes end with the family having dinner at Phil and Kay's house, with Phil leading a prayer and a voice-over narration from Willie reflecting on the show's events. 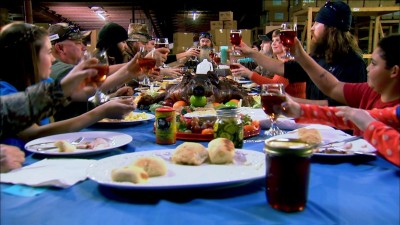 "Duck Dynasty" is shot on HD video at 24 frames per second. The episodes in the first season are encoded on Blu-Ray at 1080i (and show a few de-interlacing artifacts) while the remainder are at 1080p. I've never been a fan of video-based material at a lower frame rate- prior to high definition, I'd seen a number of concert videos that were post-processed at a lower frame rate and they weren't too pleasant to watch. HD cameras can actually be set to shoot at either 24 or 30 frames per second, and many feel that the more film-like rate gives a more "dramatic" feel, but to me it still looks like video (unlike the digital technology used for recent movies that look very close to film) and the conventional 30-frame rate looks more "live" while the lower rate looks jerky. The picture is still nicely detailed most of the time, though it's hardly reference material. Still, I'm glad that Lionsgate found this worthy of being released on Blu-Ray, as many shows like this have only been issued on standard DVD and show the limitations of that format. Uncle Si even comments at one point "Wille's idea of roughing it is watching a DVD instead of a Blu-Ray!" 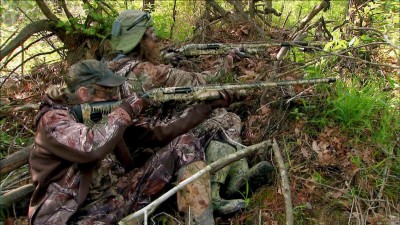 Audio is a 2-channel mix and encoded in DTS-HD Master Audio. Most of the location sound is mono with a nearly constant country-flavored music score in stereo underneath. Again, this isn't exactly reference material but it's adequate for what it is, and most of the dialogue is well-recorded despite the near-absence of sound equipment in the picture.

Hard-of-hearing subtitles are included, as well as Spanish subs (the word for "redneck" in Spanish is "campesino".)

The second, fourth and sixth discs include a few featurettes which mostly re-hash moments from the shows that we've already seen with additional thoughts from the Robertsons. The last disc includes an interesting piece however about Duck Dynasty's popularity, with those who've known the Robertsons a long time swearing that they really are in real life as they appear on the show, and stories of tourists coming to West Monroe to see the locations they frequent. 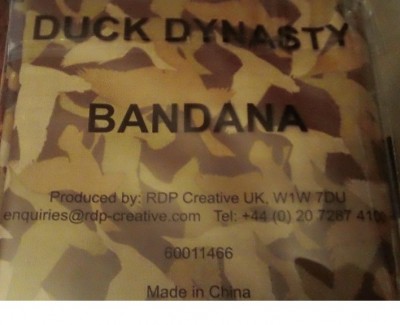 The Blu-Ray disc menus all feature the same annoying generic blues tune that Lionsgate used on their "Anger Management" discs, but they included a "quack" sound effect whenever the Enter button is pressed which made me laugh. As with most Lionsgate titles, you can bookmark favorite moments and the discs allow you to resume where you left off if ejected during playback. The six discs come in a relatively thin Blu-Ray case with no overlapping, and at least the first run of this set has the case packaged in a cardboard box which also includes a "limited-edition duck-camo bandana", which is enclosed in plastic with "Made in China" printed- wonder what Phil thinks of that? 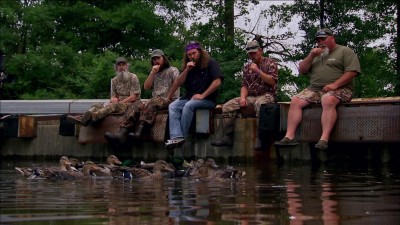 "Duck Dynasty" may have a rather simple premise and one may wonder how much of what they're seeing is "real" (most likely their business isn't run exactly the way it's shown here), but there's no denying that it's entertaining (much more so than I expected) and the Robertsons are an interesting bunch. We'll have to see what they come up with in future seasons.