It was, apparently, a troubled production. Stanley Kramer was the original producer-director, but he sold his rights to Lew Grade's ITC. The script, adapted from Clive Cussler's 1976 novel, endured myriad rewrites, including one stab at the screenplay by Larry McMurtry. Production costs soared, garnering bad trade press, and many critics reviewed the budget instead of the movie.

Another likely contributor to Raise the Titanic's commercial failure was the unwise decision to cast the film without any bankable stars. Top-billed Jason Robards had recently won back-to-back Academy Awards (for All the President's Men and Julia) in the supporting category, but his marquee value was negligible, as were those of co-leads Richard Jordan and David Selby.

The third strike against Raise the Titanic was that is was essentially self-distributed in the North America by Associated Film Distribution (AFD), a company partnering ITC with Thorn EMI. My memory is that ITC product played less than ideal venues back in the late 1970s through early ‘80s. Even popular ITV films like The Muppet Movie (1979) were restricted to second-rate neighborhood theaters because bigger companies like Warner Bros. and Fox dominated the best showplaces.

Raise the Titanic is ripe for reappraisal. It's not an unsung masterpiece but overall it's pretty good, unusual, and certain aspects of the film are excellent. Lions Gate previously released the film to DVD, but as the lowly second feature of a double-feature disc top-lined by Man Friday (1976), also coincidentally recently released to Blu-ray. That 2006 DVD ruinously presented this Panavision production in 4:3 pan-and-scan. Shout! Factory's Blu-ray includes a brand new making-of featurette that incorporates standard-def if widescreen clips from the film, demonstrating that even a 16:9 enhanced DVD is really inadequate for a film of this scale.

Happily, the Blu-ray transfer at long last restores the film's genuine majesty. It's a great-looking movie with, for the time, visually spectacular if imperfect miniature effects. Further, the film boasts a superb musical score by John Barry, one similar to other minor key-dominated films he was doing at the time, notably Moonraker and The Black Hole (both 1979). The high-def picture and 5.1 DTS-HD Master Audio add up to a really memorable viewing experience, to say nothing of the obvious multi-faceted influence it had on director James Cameron.

The movie follows the basic plot of Cussler's 1976 novel (to be precise, entitled Raise the Titanic!), though abandons much of the marine salvage technology present in the book, dispenses with various minor characters and subplots, and simplifies the climax. However, in both the book and the film the story revolves around a McGuffin called "byzanium," a rare (and fictional) uranium-like mineral of which 200 ounces are needed to power "The Sicilian Project," a U.S. anti-nuclear missile laser defense system (sound waves in the novel) destined to "make nuclear war obsolete." The only source of byzanium came from an early 20th century mine in Russia, by this time part of the Soviet Union.

A spy named Sid Koplin (Stewart Moss) sneaks into the USSR and locates the abandoned mine only to find it played out. Eventually another spy, free-lancer Dirk Pitt (Richard Jordan), learns that the byzanium was packed up and placed aboard the White Star Line's ill-fated RMS Titanic, which sank to the bottom of the Atlantic in 12,500 feet of water.

With the approval of Admiral James Sandecker (Jason Robards), Director of the National Underwater and Marine Agency, and support from the President, Pitt and physicist Dr. Gene Seagram (David Selby), developer of the Sicilian Project, oversee a massive effort by the U.S. Navy to raise the lost ocean liner to access her cargo hold and the vault containing the priceless mineral.

The business with the byzanium is trite, a cliché that turns up in endless science fiction cheapies, though also in critically-lauded films like Alfred Hitchcock's Notorious (1946). Additionally, there's a completely unnecessary subplot concerning Seagram's wife (Anne Archer), who once had a relationship with cocksure Pitt, but these are minor distractions.

The main reason for Raise the Titanic's existence is right there in the title, the public's undying interest in the doomed passenger liner, whose wreckage was still lost when the film was made. (The real Titanic wasn't located until September 1985, and its remains not adequately documented until well after that.) Instead, by cleverly contriving circumstances that would make her salvaging not only desirable but also a "ticking time bomb" necessity, the movie then logically speculates how this might be accomplished.

And, to the film's credit, through its carefully researched special effects and underwater photography, Raise the Titanic creates impressive images almost identical to undersea video and photographs made years later when the real Titanic wreckage was discovered and explored. (The only major difference being that the real ship had split apart, despite the widely-held belief to the contrary when Raise the Titanic was in production.)

The centerpiece of the special effects was unquestionably a 55-foot-long miniature of the vessel, 1/16 scale, filmed with a special camera under-cranking at up to 3,000 frames/second in an attempt to make the sea water washing over the ship look right. Even at this size, however, droplets appear too large at times; a maximum 1:3 scale being needed to really fool SPFX-savvy audiences.

Still, the illusion is more than convincing enough, especially because the model is so exquisitely detailed and otherwise photographed well. Part of the film's high cost was blamed on the supposedly $7 million Titanic model, but I find that widely reported figure to be outrageously unbelievable. That would make it, after all, nearly four times the cost of full-scale supertanker set (including two full-size submarines) built for The Spy Who Loved Me, seven times the cost of the full-scale SPECTRE volcano base from You Only Live Twice (1967), and two-thirds the entire cost of Star Wars (1977). More likely $7 million figure is closer to the entire cost of miniature photography, including rental of a massive water tank in Malta, payroll, etc.

Today, of course, Raise the Titanic special effects would be a breeze to produce via CGI, but what John Richardson's special effects crew accomplished is in many ways even more impressive than what could be dashed off in a matter of weeks out of some industrial park in Silicon Valley. There's an old school majesty and epicness to Raise the Titanic sorely missing in most movies today, movies touting far bigger scale effects. The miniatures and matte paintings in Raise the Titanic may not have the same photo-real quality of today's CGI work, but it also fosters a sense of awe nearly all of today's spectaculars lack. Near the end of the film, when the Titanic is towed into New York Harbor as thousands of locals, on shore and aboard escorting ships, look on in wonder, the sight of the resurrected ship is almost moving. 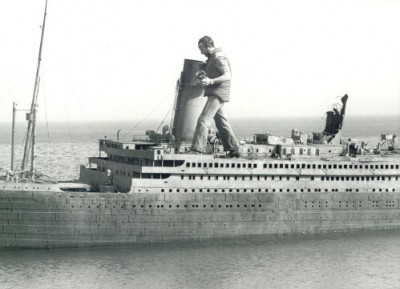 Shout! Factory's 1080p Blu-ray of Raise the Titanic (which includes a DVD copy as well) looks and sounds spectacularly good. The 2.35:1 Panavision image has a nice film grain quality throughout, color is good, blacks are solid (especially important for all the underwater footage), and one at last can appreciate the film's widescreen compositions and the incredible detail in the miniature photography. (More on why Raise the Titanic is essential viewing in the Blu-ray format above.) Likewise, the 5.1 DTS-HD Master Audio (also available in a 2.0 mix), adapted from the original Dolby Stereo, really shines in terms of maximizing composer John Barry's invaluable contribution, his music really selling the story's romanticism and scale. The surround channels are used well, with helicopter engines roaring from the rear speakers, and all-enveloping the audience during the underwater sequences. The disc, with no other language or subtitle support, is region A encoded.

Extras include a give-away-the-store trailer, also in high-def, and an interesting, thoughtful featurette called Making of Raise the Titanic but which really focuses almost solely on the special effects, not the making of the picture generally. Model unit director and one-time Creature from the Black Lagoon Ricou Browning, underwater camera operator Michael Ferris, director of photography Matthew F. Leonetti, and special effects director John Richardson are interviewed.

Don't let its reputation persuade you otherwise. Raise the Titanic is a strong film ideally suited to Blu-ray, digital surround, and big screen TVs. It's not a great film, but it is a very good one worth rediscovery, much like the Titanic itself. A DVD Talk Collector Series title.