Twilight Time // Unrated // November 1, 2013 // Region 0
List Price: $29.95 [Buy now and save at Amazon]
Review by Stuart Galbraith IV | posted December 4, 2013 | E-mail the Author
Jane Eyre (1943 in the U.K., 1944 in the U.S.) is an excellent adaption of Charlotte Brontë's 1847 novel. The movie is often compared to Alfred Hitchcock's film of Daphne du Maurier's Rebecca (1940) which likewise starred Joan Fontaine. Rebecca was produced independently by David O. Selznick, as Jane Eyre was to have been, but he sold the project (along with the talent he'd already assembled) to 20th Century-Fox and the project ended up being made there.

It's also, a bit, like an Orson Welles-directed movie. Fresh from the triumphs and tragedies of Citizen Kane (1941), The Magnificent Ambersons (1942), Journey into Fear (1943) and the aborted It's All True, Jane Eyre was Welles's first acting role in the movie he did not produce. (He was to have directed Journey into Fear, but in the end Welles hired Norman Foster to helm most of that one.)

Welles did not direct Jane Eyre; Englishman Robert Stevenson did. However, Welles did function as a kind of hands-on Associate Producer, and his influence can be felt in myriad ways.

A Twilight Time release, Jane Eyre was sub-licensed from Fox. For reasons unknown the black and white production has never looked great on television or home video, where it often appears so dupey and washed-out as to resemble a kinescoped TV production. The Blu-ray, while far from perfect, is the first truly acceptable presentation I've seen. Most of the film takes place in dimly-lit, cavernous rooms, or on fog-shrouded moors at night ("Man, this movie is BLACK!" I heard myself exclaim while watching this) and in high-definition one can appreciate George Barnes's daring cinematography really for the first time in years. 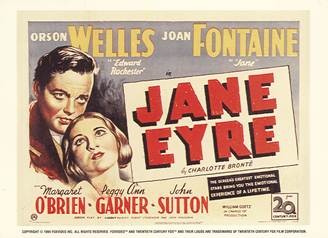 Advertising art doesn't get much worse than this. Who are these people? Ben Turpin's parents?

In early 1830s England, ten-year-old orphan Jane Eyre (Peggy Ann Garner) lives with a cruel aunt (Agnes Moorehead), who dotes on her spoiled son. Hoping to escape this loveless arrangement, Jane accepts an offer from Rev. Brocklehust (Henry Daniell) to attend Lowood Institution, a charity school for girls, but life there is no better under his sadistic leadership. Upon arriving Brocklehurst humiliates Jane to the staff and schoolgirls, introducing her as an "evil" child to be shunned.

One girl, Helen (an unbilled Elizabeth Taylor), becomes her friend anyway, though she soon succumbs to illness after the two girls are made to walk endless circles in the pouring rain carrying heavy weights.

Ten years later, 20-year-old Jane (now played by Joan Fontaine) declines Brocklehurst's offer to work as a teacher (at slave wages). She daringly strikes out on her own despite an absence of references. She lands a position as governess for a young French girl named Adele (Margaret O'Brien) at Thornfield, the gloomy, castle-like estate of mysterious bachelor Edward Rochester (Orson Welles).

Jane instantly bonds with Adele and housekeeper Mrs. Fairfax (Edith Barrett, at the time Mrs. Vincent Price), but does not know what to make of her enigmatic, domineering (but not unkind) and somehow tragic employer. Adding to the mystery, Jane hears maniacal laughter and senses strange late-night wanderings emanating from another wing of the house, where stern seamstress Grace Poole (Ethel Griffies, later the eccentric ornithologist in The Birds) seems to be keeping someone or something under lock and key.

Jane Eyre is a beautifully realized film, especially in its first-half. Peggy Ann Garner gives one of the best-ever film performances by a child as the young Jane, subtly expressing much emotion through her eyes; she's better than some of the more theatrical adult performers. She's so good, in fact, even in her scenes with Elizabeth Taylor it's Garner the audience can't take their eyes off of. Henry Daniell, often cast as villains, here plays the most believably reprehensible character of his career, a true sanctimonious sadist. Amusingly, Jane Eyre culls supporting players from Universal's "Sherlock Holmes" series stock company of actors. Besides Daniell (who played Professor Moriarty, among other roles), John Abbott appears in Jane Eyre as Mason, strange visitor from Jamaica, while Hillary Brooke has the plum role of Blanche Ingram, Edward's intended bride.

Fontaine's Jane has been criticized by some as too closely resembling her simpering young bride from Rebecca rather than Brontë's proto-feminist, but to me she strikes exactly the right balance, as much a proto-feminist as could exist in repressive 1840s England.

Orson Welles's influence is felt in numerous ways. Agnes Moorehead and Edith Barrett were members of Welles's Mercury Players, while composer Bernard Herrmann, who replaced Igor Stravinsky, likewise worked with Welles during his radio years, and got into movies via Citizen Kane and Ambersons. The harsh photography of daytime exteriors and moody lighting and angles of matte shots of Thornfield resemble Kane's Xanadu, while interiors remind viewers of Ambersons. Abrupt transitions from one scene to the next, with Herrmann's scoring used for punctuation, also resembles Welles' previous work. And, finally, around this time Welles began obsessively looping and relooping dialogue in the movies he directed, fine-tuning the performances in postproduction. In Jane Eyre no more than the usual amount appears redubbed except for Welles's performance, which to my ears seems at least 60% re-looped.

This is not to take away from credited and rightful director Robert Stevenson, a fine filmmaker whose credits include the 1937 film of King Solomon's Mines and the surprisingly good The Man Who Changed His Mind. (1936). He later made 21 increasingly mechanical movies for Walt Disney Studios, but the early ones, especially the magical and evocative Darby O'Gill and the Little People (1959) are quite good, too. Like that film, Jane Eyre is genuinely creepy at times, also exhibiting some influence from producer Val Lewton's period horror films at RKO, and these scenes particularly are probably more emphatically Stevenson's work than Welles's.

Jane Eyre still looks quite dupey and washed-out at times, but this new 1080p Blu-ray also decently retains the heavy blacks that so dominate the picture. The 1.0 DTS-HD Master Audio also is a big improvement over past home video and television versions, and an isolated music & effects track allows viewers the opportunity to enjoy Herrmann's magnificent score. The release is limited to 3,000 units, so get yours now.

Supplements are mostly ported over from Fox's April 2007 DVD. They include an audio commentary with film historian Joseph McBride and actress O'Brien, a second audio commentary track with Twilight Time's Julie Kirgo (who also contributes the booklet essay), Nick Redman, and Steven C. Smith; a "Locked in the Tower" behind the scenes featurette; Know Your Ally Britain, a wartime propaganda film directed by Stevenson, and a trailer.

Still the best film of Jane Eyre and the best-looking video transfer of the film so far, this is a handsome, very worthwhile release and Highly Recommended.