VEI // Unrated // November 12, 2013
List Price: $299.95 [Buy now and save at Visualentertainment]
Review by Stuart Galbraith IV | posted December 5, 2013 | E-mail the Author
Diagnosis Murder (1993-2001), a mystery series starring the irreplaceable Dick Van Dyke, was emblematic of CBS's senior-skewing prime-time line-up during the 1990s. Murder, She Wrote, with Angela Lansbury, had been a huge hit for the network for most of its 1984-96 run, spawning myriad imitators of which Diagnosis Murder was perhaps the most successful. Representative of the generally unambitious, personality-driven formula mystery shows of its period, it has no right to be as entertaining as it eventually became. But Van Dyke's genial presence as the show's anchor, a likeable supporting cast, and a we'll-try-anything approach in its later seasons, including appropriating characters from earlier classic television shows, even staging quasi-reunions for some episodes, made Diagnosis Murder a real wild card of a series. After a slow start of pretty ordinary mystery solving, Diagnosis Murder became engagingly unpredictable.

Largely because even now audiences can't seem to get enough of Dick Van Dyke, the show has remained popular and has been trickling out on DVD since 2006. Diagnosis Murder: The Complete Collection repackages all eight seasons and also includes the episode of Jake and the Fat Man that introduced Van Dyke's character, Dr. Mark Sloan, as well as the three TV movies from 1992-93 that preceded the series, and the two from 2002 that aired after the show's cancellation. The set isn't cheap but it's a veritable mountain of material: 143-plus hours on 51 single-sided DVDs.

Technically a spin-off of Jake and the Fatman (Van Dyke's character, Dr. Mark Sloan was introduced in a 1991 episode called "It Never Entered My Mind"), Diagnosis: Murder is set in Los Angeles and follows the crime-solving activities of Dr. Mark Sloan (Van Dyke), wayward Chief of Internal Medicine at Community General Hospital. Unlike Murder, She Wrote, whose crime-solving heroine had improbably easy access to crime scenes in a small New England town beset with an alarming murder rate, Diagnosis: Murder's set-up is a bit more plausible. Sloan's son, Steve (Barry Van Dyke, Dick's son) is a homicide detective sharing the same beachfront house in a separate, basement apartment below Mark's residence. He brings Dad in to help out with the medical end of his investigations.

The first two seasons of Diagnosis Murder were, frankly, not all that good. The program emulated Murder, She Wrote a bit too closely, with nosy outsider Mark weaseling his way onto Steve's crime scenes while Briggs fumes and fusses about Mark's constant absence. The mysteries themselves were generally quite ordinary, with only the occasional interesting medical angle livening them up. Baio's cocksure character wasn't likeable and Briggs was mostly annoying. The show struggled these first two seasons and was effectively cancelled, only to be brought back as a midseason replacement in its third year.

At this point Baio left the show (his character leaving the hospital to start his own practice) and was replaced by Charlie Schlatter as Dr. Jesse Travis, a Community General resident. Initially a clean-cut prodigy with a passion for surfing and the like, Jesse gradually becomes a more complex, interesting character who looks up to Mark and especially Mark's warm relationship with his son, something denied Jesse with his estranged father (Robert Culp).

Briggs and Delores gradually faded into oblivion (Briggs, reportedly, was to have been murdered in his last show, but actor Tucci supposedly talked the producers out of this; instead his character simply vanishes into the void, like Delores) and the series found its groove with Mark, Steve, Amanda, and Jesse solving crimes as an unofficial investigative unit. Mark and Steve enjoy a relaxed relationship that, one suspects, is probably pretty close to the one Dick and Barry have in real-life, while Amanda and Jesse compliment those characters nicely.

According to Dick Van Dyke, the series was throughout its run never renewed for a complete season. Rather, CBS would simply order another batch of new episodes, probably 13 or so at a time, and that combined with having exhausted the genre's potential may account for the many offbeat episodes as the series progressed.

In later seasons, Diagnosis Murder developed a reputation for reuniting cast members from other shows, sometimes explicitly reprising their famous characters or playing thinly-disguised variations. One episode, for instance, brings together cast members from the movie and TV versions of M*A*S*H, as well as Trapper John, M.D.: Elliott Gould and Sally Kellerman from the movie, Jamie Farr, Loretta Swit, and William Christopher from the TV show, and Christopher Norris from Trapper John. It's certainly intriguing watching two "Hot Lips" Houlihans interact.

Barbara Bain reprised her Cinnamon Carter character from Mission: Impossible for the first and only time since leaving that series in 1969, in an episode also featuring Robert Culp playing his character Kelly Robinson from I Spy in all but name (as Jesse's father), as well as The Man from U.N.C.L.E's Robert Vaughn, The Avengers Patrick Macnee, and Mission: Impossible revival star Phil Morris (son of actor Greg Morris).

Other shows saw the return of Joe Mannix (Mike Connors), Ben Matlock (Andy Griffith) and reunions of cast members from Happy Days and Emergency!. Even Rob Petrie makes a cameo appearance in one show.

One of the best of these was a sixth season episode called "Alienated!" which featured George Takei, Walter Koenig, Majel Barrett, Wil Wheaton, Grace Lee Whitney, and Bill Mumy, all from various Star Trek series. (Lost in Space actor Mumy had appeared on Star Trek: Deep Space Nine.) That clever episode's teleplay, which suggests Jesse may have been the victim of alien abduction, turns out to actually involve the machinations of a pharmaceutical company trying to discredit Jesse before he can publish a negative report about a new drug with dangerous side effects.

Indeed, though soft-pedaled, Diagnosis Murder even occasionally ventured into stories with mild political content. The last of the TV movies, for instance, involves another drug company's testing of an unproven arthritis drug on unsuspecting illegal Mexican migrant workers. It's not exactly The Constant Gardener, but for a little mystery show it's surprisingly ambitious.

Ultimately though, it's Dick Van Dyke that makes Diagnosis Murder worth watching. He's one of TV's great treasures, and his delightful performances carry the weaker shows. Though at times his little comedy asides seem to come out of nowhere - in one episode he's seen fooling around with his audio system, dancing about his home office to the music - such moments are charming nonetheless. 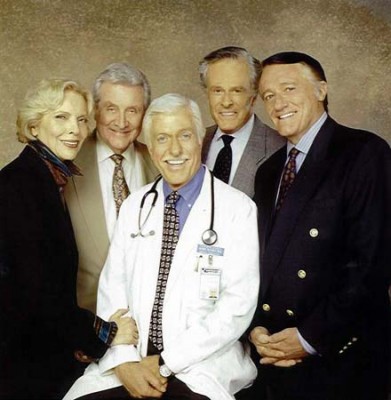 Diagnosis Murder - The Complete Collection comes in a sturdy cardboard box containing 11 standard DVD cases, with seasons four and five broken up into two sets apiece, and one DVD case containing all the before and after TV movies. The series was shot on 35mm film but finished on tape, so the early seasons especially are on the soft side, though this improves noticeably for the later seasons. None of the shows I looked at appeared cut, time-compressed or music-replaced, this despite the usual ominous warning on the packaging that "some episodes may be edited from their original versions." The Dolby Digital stereo is fairly good. There are no subtitle or alternate audio options, and no Extra Features.

Before Blu-ray, laserdisc, and even VHS there was "DVD": Dick Van Dyke. Diagnosis Murder may not be in the same league as The Dick Van Dyke Show, but the series, on its own terms, is often a lot of fun and, if you're a fan, this Complete Collection is the best and most convenient route to enjoying it. Highly Recommended.