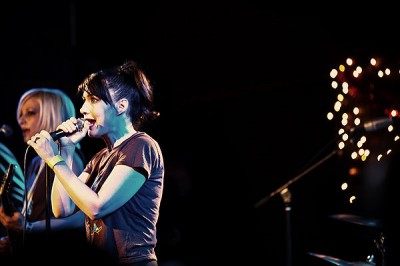 Sini Anderson's the The Punk Singer is many things. It's a music documentary. It is, at least in part, a chronicle of a scene/movement. It's a biography of a person. And it's also, most surprisingly, a message movie. Not surprising in that part of the message furthers the work its subject began more than twenty years ago, but surprising for all the added meaning the mission has taken on since.

The punk singer in question is Kathleen Hanna, former frontperson of the bands Bikini Kill and Le Tigre, current leader of the Julie Ruin. Hanna inspired a generation of women to form bands and own their voices in other ways via her Riot Grrl manifesto. She was friends with Sonic Youth and Kurt Cobain, and is responsible for the phrase "smells like teen spirit." In her career, she has been fierce, creative, and righteous.

The Punk Singer begins with the question, "Why did Kathleen Hanna stop performing in public in 2005?" Anderson doesn't provide the answer right away, but instead quickly rewinds to examine the history, to find out why Hanna became a genuine punk icon and track the history of her as a performer and, more importantly, as a person. Hanna's band Le Tigre has been profiled on film before, but Who Took the Bomp?, shot on the group's final tour, was really just a snapshot of that time. Even the DVD extras that caught up with the trio failed to expose the full story of why they split. 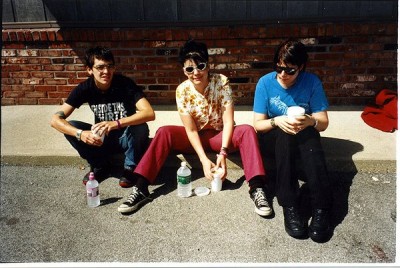 Anderson takes an hour to get back to the central query, and when the answer arrives, it's heartbreaking. I suppose it's a spoiler of a kind, but it seems ridiculous to treat a person's real-life struggles as a plot twist, no matter how shattering the revelation in the film. The hidden truth is that Hanna stopped singing because she was ill, and for various reasons, it took five years to get to the bottom of what she was afflicted with. In 2010, the artist was diagnosed with late-stage Lyme disease, a malady that can be managed but that often gets worse before it gets better.

The final half-hour is devoted to how Hanna deals with the disease and what it means to be living with an illness of that kind. In relation to what I said about how her message of empowerment has grown since the Riot Grrl days, her coping with a debilitating disease has only strengthened Hanna's compassion and her devotion to giving voice to the voiceless. The Julie Ruin, who released a record earlier this year, is her response to her illness, and the songs are her most expansive and inclusive to date.

Anderson builds The Punk Singer from new interviews and choice archival footage. She has been granted unprecedented access, and in addition to lengthy chats with Hanna, she talks to former bandmates, compatriots (including Sonic Youth's Kim Gordon and Joan Jett), and Hanna's husband, Adam Horowitz of the Beastie Boys (their love story in nestled in the center of The Punk Singer). Hanna's music is also ever present. The director and her editors, Jessica Hernandez and Bo Mehrad, establish a constant rhythm using songs from all stages of Hanna's career, cutting together different performance videos to create a consistent montage for each highlighted number while showing just how versatile Hanna's visual presentation could be.

I was fortunate enough to see Bikini Kill back in the day and can testify first-hand to what an incredible presence Kathleen Hanna is on stage. The Punk Singer also shows what an incredible person she is off of it. Whether you like stories about music, creative people in general, or individuals who show strength in the face of adversity, The Punk Singer is essential viewing. 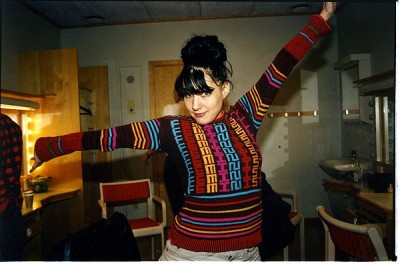