The Criterion Collection // Unrated // March 18, 2014
List Price: $39.95 [Buy now and save at Amazon]
Review by Stuart Galbraith IV | posted March 19, 2014 | E-mail the Author
Akira Kurosawa set out to make The Hidden Fortress (Kakushi toride no san akunin or "Three Bad Men of the Hidden Fortress," 1958) as "100% Entertainment." In that he succeeds completely. The movie, later the basis for the first Star Wars (1977), to the point where Hidden Fortress star Toshiro Mifune was even considered for the role of Obi-Wan Kenobi, remains as thrillingly entertaining now as it was 55 years ago. An epic period adventure, The Hidden Fortress is escapist gold, full of suspenseful action and broad comedy undated by the passage of time. It is, perhaps, Kurosawa's most accessible film for those normally scared off by foreign movies with English subtitles.

Made during Kurosawa's unbroken run of cinematic masterpieces released during 1948-65, all but one starring or co-starring Mifune, it marked Kurosawa's first film in anamorphic wide screen, Toho Studio's CinemaScope-compatible Toho Scope process, with the added plus of Perspecta Stereophonic Sound, which Kurosawa uses sparingly but effectively. "I have been feeling that the standard screen is a little too narrow from the viewpont of composition to my way of thinking," Kurosawa said at the time. "I find wide screen rather easier for me."

Though Kurosawa was awarded a Silver Bear for Best Director, for years the movie was available in America only in a radically cut version, the complete 139-minute version unavailable until Star Wars renewed American interest in the picture. Appropriately, that film's director, George Lucas, appears on Criterion's Blu-ray disc, providing an introduction and appreciation.

Toho's own video division has released mostly lackluster Blu-rays within Japan, but Criterion's disc, a 2K transfer from an original fine-grain master positive, looks superb, while the Perspecta tracks are included as well. 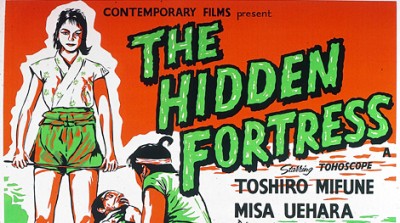 The film follows the adventures of two hapless, insatiably greedy peasants, Tahei (Minoru Chiaki) and Matashichi (Kamatari Fujiwara), caught up in a war between the powerful and ruthless Yamana clan and the defeated Akizukis. Taken prisoner by the Yamanas, the two are forced to dig for gold possibly hidden in the ruins of the Akizuki castle (a spectacular set).

They escape during a prison uprising, and discover Akizuki gold hidden in a stick of firewood. They're soon soon joined by an intimidating wanderer. He is, in fact, General Makabe Rokurota (Mifune), who is attempting to escort surviving Princess Yuki (Misa Uehara) to safety. Amused by their stupidity and greed, and needing help to get the Akizuki gold across the border in order to rebuild the clan, he enlists their aid. Around them he pretends to be an equally unscrupulous thief while claiming the beautiful princess is actually his deaf-mute lover, the better to hide her refined speech.

Kurosawa and co-writers Shinobu Hashimoto, Ryuzo Kikushima, and Hideo Oguni typically co-wrote Kurosawa's films together while secluded at a Japanese inn, a ryokan. Their method of writing was to work together all day long while writing on the same scenes separately. Afterwards, they'd compare and discuss what each had written, pooling their best ideas and discarding weaker material. Kurosawa normally had the final word on what was kept in, though Oguni, Kurosawa's senior, had a kind of veto power even over material Kurosawa himself liked.

In the case of The Hidden Fortess, Kurosawa challenged his co-writers to come up with inescapable situations for the film's heroes. "Every morning I created a situation which allowed no escape for the general and the princess," Kurosawa said. "Then the other three writers made desperate efforts of finding a way out. This is how we wrote day by day. I wanted to make an invigorating historical spectacle." And so he did. This working method resulted in an episodic but tremendously exciting and entertaining film.

In the accompanying booklet essay, Catherine Russell makes the case that "The Hidden Fortress is, like so many of Kurosawa's films, Mifune's movie." I disagree. The cleverest touch of the team's screenplay is in telling its story through the experiences of Tahei and Matashichi, not Mifune's. These characterizations are rooted in the singularly Japanese manzai tradition of stand-up comedy monologues, as well as the much earlier Yaji and Kita characters from Jippensha Ikku's Picaresque Shank's Mare (Tokaidochu Hizakurige), itself adapted into several films immediately preceding The Hidden Fortress.

Chiaki and Fujiwara are simply hilarious in their roles: ludicrous, incompetent, endearing rubes. Some of their insult-slinging is even funnier to Japanese-speakers as the humor doesn't fully translate into English, but their broad reactions are priceless throughout. Misa Uehara (no relation to the current, same-named actress) was plucked out of obscurity, literally spotted while at the movies by a Toho employee. Her film career was short and fairly unmemorable, but as directed by Kurosawa she's just right: sexy yet refined, a stylized performance, this despite a failed attempt to make her buxomly like Elizabeth Taylor. (Instead of big curvy hips, the princess instead looks like she's wearing an oversized diaper.)

Mifune is classically heroic, the princess's devoted servant, but in several scenes everything that's uniquely great about Mifune gets to shine, the highlight being the actor, not doubled by a stunt man, charging after some samurai on a horse, both arms raised with a sword in his hands, ready to strike. It's one of the great thrills in all of cinema, and aided immeasurably by Masaru Sato's rousing score.

The film was a huge hit in Japan, earning a bit over USD $1 million, and it ranked Second on the influential Kinema Jumpo magazine's list of the year's best films (just behind Keisuke Kinoshita's The Ballad of Narayama).

Toho began the switch to anamorphic widescreen (which they called Toho Scope until 1968) in 1957, just one year prior to The Hidden Fortress's release. Even so, the image is extraordinarily sharp and detailed, lacking the occasional murkiness and "CinemaScope mumps" of Fox's initial batch of Bausch & Lomb ‘scope lenses. The Hidden Fortress anticipates the routinely expert use of the ‘scope frame by Japanese directors and cinematographers in jidai-geki/chanbara and crime films and is a real joy particularly on large monitors and screens. Though the disc defaults to the mono track, I strongly recommend switching to the Perspecta option, reconfigured for DTS-HD 5.1 audio. Though limited compared to other early Toho Perspecta titles, the stereo effects are quite effectively done when they are employed. The newly translated English subtitles, which stay within the frame area, are excellent, and the disc is Region "A" encoded.

The primary supplement is a 2003 documentary entitled "Akira Kurosawa: It Is Wonderful to Create," part of a series of featurettes originally included on Toho Video's DVDs of the Kurosawa films they own. Criterion's 2001 DVD predates it and thus was not included. The 40-minute documentary is generally excellent, taking the viewer through a history of the production and noting Kurosawa's many innovations. There are brief audio interview excerpts (done over the telephone) but no video with Mifune and Uehara, though much of the crew appears on-camera, including art director Yoshiro Muraki, script supervisor Teruyo Nogami, and actors Takeshi Kato, Yi Fujiki, and Yoshio Tsuchiya. Kato tells an especially amusing anecdote about filming his brief but unforgettable appearance. (I had the good fortune to interview Mr. Kato for my book, The Emperor and the Wolf, and he has wonderful stories about everything. Somebody should make a documentary about this prolific actor who's worked with practically every major postwar director.)

Also included are a new audio commentary by Stephen Prince, George Lucas's previously released introduction, a rather poorly transferred trailer that nonetheless includes footage of Kurosawa on the set, and a booklet essay by Russell.

One of Akira Kurosawa's dozen or so indisputable masterworks, The Hidden Fortress has never looked better and, with great supplements to spare, is a DVD Talk Collector Series title.