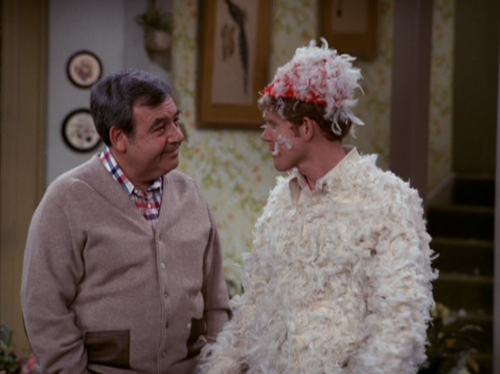 The cover of the new fifth season collection of Happy Days episodes shows Henry Winkler's iconic character Arthur "Fonzie" Fonzarelli on water-skis, so that can mean only one thing. This is the season where Fonzie jumps the shark. Fonzie's daredevil leap would not only serve as the climax of a gimmicky three-episode "event" where the Cunningham family takes a trip to Los Angeles, but it would later be emblematic of those too frequent moments when the creators of pop culture lose touch with their own creation. In the case of Happy Days, it's the bizarre evolution of a low-key sitcom about family life in Milwaukee in the 1950s into something broad enough to feature pseudo-Evel Knievel stunts. Lately, the phrase "jumping the shark" has found its way into plenty of discussions that have nothing to do with TV. When something great turns awful, when a politician loses his support base, when a tech giant no longer innovates, writers will re-summon the vision of Fonzie in leather jacket and swim trunks, water-skiing up a ramp and jumping over a penned-in shark.

Typically, when something jumps the shark, it not only loses touch with what made it appealing in the first place, it also starts to wane in popularity. The odd thing that makes Happy Days the exception to its own rule is that the show didn't start to decline in popularity at this point. The shark-jumping episode was a hit. The series was number 2 in the ratings for this fifth season. (The ratings didn't really start to dip until a few years later when ostensible main character Richie Cunningham was written out of the show so that Ron Howard could focus on directing movies.) And, though this fifth season of Happy Days is never subtle, it doesn't yet bear the stink of running out of workable ideas. 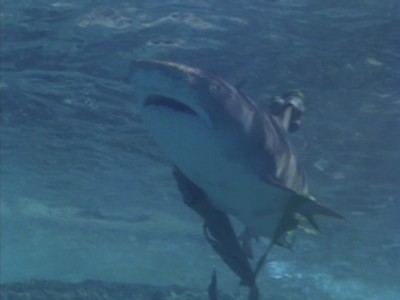 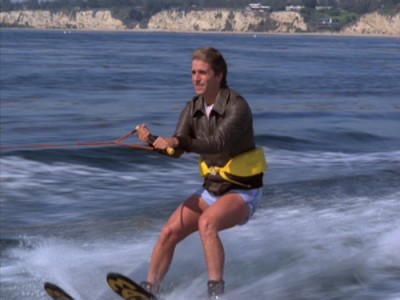 For a kid who first discovered Happy Days through syndicated reruns, this fifth season (for better or worse) pretty much represents the style of the show I watched the most. I have not caught up on the show's single-camera-shot early seasons that are supposedly quieter and smarter, so I don't really have a sense of the heights from which we might have fallen. On its own terms, this season doesn't seem all that bad. Sure, there's plenty of questionable acting, formulaic plotting, workmanlike directing, and jokes that were ancient even back before show creator Garry Marshall was a teenager, but the cast is incredibly likable and they have an effortless chemistry. Ron Howard and Henry Winkler particularly shine as ultra-straight Richie and ultra-cool Fonzie whenever they share a scene, with highlights including a hammy Hollywood screen test during the L.A.-set three-parter and an instructive bit of role-playing for Richie's sister on how to rebuff an amorous boy when parked in a car during the episode "Joanie's First Kiss."

The good and the bad news is that much of the season therefore becomes "The Richie and Fonzie Show," with everyone else only getting a few brief moments to step out from the background. The growing pains of sister Joanie (Erin Moran) scores a little attention this season, but mostly she just sits there on the Arnold's Drive-In set near Richie's second bananas Potsie (Anson Williams) and Ralph Malph (Don Most), chiming in with lame zingers or getting hit on by Fonzie's Scrappy Doo-like cousin Chachi (Scott Baio, in his first season on the show). Meanwhile, father Howard (Tom Bosley) and mother Marion (Marion Ross) deal with feelings of complacency in their marriage; in the episode "Marion's Misgivings," Marion dresses up like a belly dancer because she fears Howard will leave her for a younger woman. 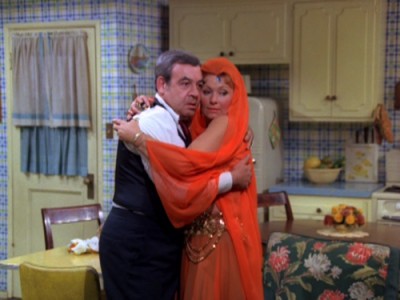 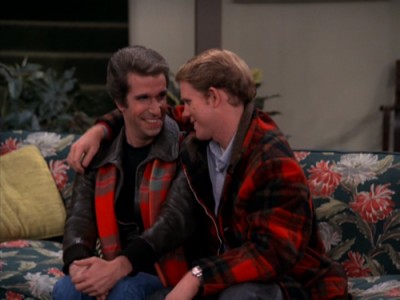 Hoping to repeat the success the show had in its third season, spinning a few new characters named Laverne and Shirley off into their own series, Potsie and Ralph are given a backdoor pilot where they move into a new apartment and inevitably get on each other's nerves. The network smartly passed on this, but Garry Marshall didn't stop trying. The episode "My Favorite Orkan" features a special guest appearance by a then-unknown Robin Williams as an alien named Mork from Ork. The fact that this family show suddenly has an episode about a spaceman would seem to be further evidence of shark-jumping, except for one small thing: the episode is awfully funny, and Williams, Howard, and Winkler are great in it. Mork plans to take Richie back to his planet for scientific study, but Fonzie challenges Mork, in an ever-escalating battle of cartoony hijinks that proves the characters are worthy adversaries. The actors were too. Mork and Mindy got picked up, and the Happy Days writers put in the classic trapdoor for ridiculously plotted episodes: it was all a dream.

Other notable happenings in this season include a handful of recurring appearances by mulleted lady rocker Suzi Quatro as Leather Tuscadero, the troubled little sister of Fonz's ex-flame Pinky Tuscadero. She rocks out some '50s numbers, including "All Shook Up," a song she had already released as a single herself just a few years before she joined the show. As with many of the previous Happy Days DVD sets, some of the vintage songs have been replaced by generic sound-alike songs; although almost all of the live performances from the show seem to have been left intact, there is an odd moment in the late-season episode "Rules To Date By" where Leather's band is shown performing with Leather singing that has clearly had its soundtrack swapped out for a generic instrumental. I know renegotiating music licensing for DVD must be tough, but jeez!

This season also features the episode "Richie Almost Dies," where Richie decides to try riding a motorcycle and wipes out. While this episode is pretty darn heavy-handed and manipulative, it has a beautiful moment from Henry Winkler where Fonzie goes to see a comatose Richie in the hospital late at night. The Fonz decides to talk to the Man Upstairs and see what He can do for his friend; in theory, this scene should be corny garbage -- we know the producers wouldn't kill Richie, after all -- but Winkler puts away the jukebox-hitting caricature and taps into Fonzie's humanity, eventually breaking down crying in such an authentic way that it feels startling. If this is one of the aspects of the show people feel got lost in the pursuit of big laughs and big ratings, then maybe I wish this season had more of that stuff too.

As it stands, Happy Days's fifth season may be a little shallow and silly in places, but it also has plenty of strong episodes and standalone moments that merit appreciation and shouldn't be dismissed automatically just because they occurred post-shark-jump. 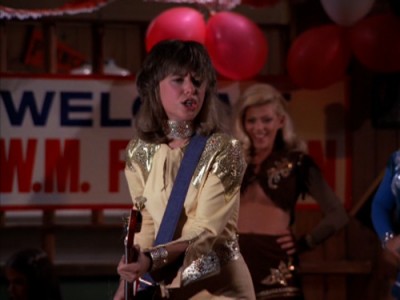 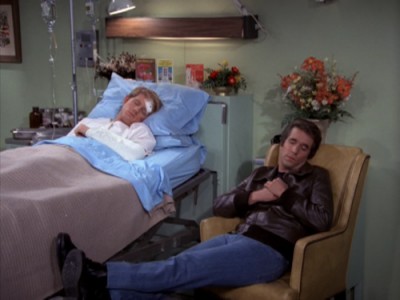 The DVDs
The season's 26 (or 27, see "Special Features") episodes are presented on 4 DVDs, packaged in a standard keepcase with two back-to-back trays holding the discs inside.

The Video:
Apart from some film damage that was presumably present in the original broadcasts and some slight compression artifacts here and there, the standard 1.33:1 presentation looks A-OK. The colors are rich and saturated, giving these episode a clean, appealing look.

The Audio:
As if you couldn't guess, the show only comes with 2.0 mono audio, but the tracks presented here are free from defect and have excellent fidelity. The only issues I noticed involve those generic songs replacing the original '50s needle drops that couldn't be licensed. Sometimes these faux-classics are just way too loud, so that they not only call attention to themselves, but cover up bits of dialogue too. Subtitles-wise, the disc offers English SDH.

Special Features:
As with the previous two season sets, the only bonus feature is the yearly flashback episode, which actually aired as a part of the original season. Labelled here as 4th Anniversary Special (24:53), this was originally Episode 23, "Richie's Girl Exposes The Cunninghams." As the title suggests, Richie's new girlfriend Lori Beth (Lynda Goodfriend) goes around interviewing everybody for a college essay she is writing. This allows the characters to reminisce... and then the clips just start rollin'. These clips include scenes from all five seasons, including a moment where Fonzie's shark jump is cross-cut with his barrel jump from season 3.

Final Thoughts:
Maybe that shark jump did signify that Happy Days had lost some of its smarts, but it didn't lose its soul. The fifth season is hit-and-miss, but the ratio is more heavily weighted toward the hits. During most of season 5, the excellent cast is elevating the material, and for their efforts alone, this comes Recommended. 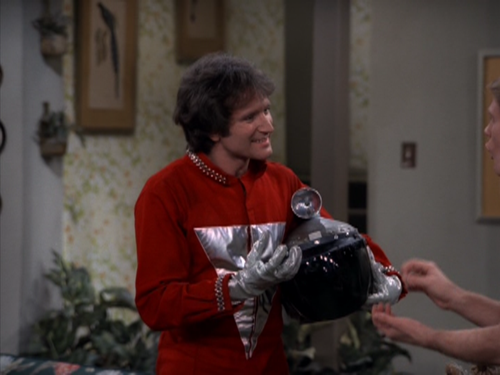