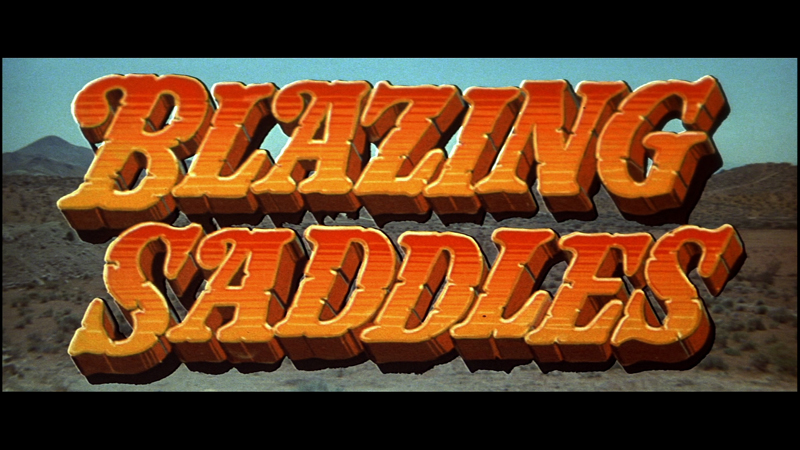 
The Movie
The only Western I'll ever really admit to enjoying, Blazing Saddles is one of the best films Mel Brooks was ever involved in. Taking aim at the genre's conventions, race relations and movie-making in general, the film is brilliant in its parodies, never pulling a punch as it follows the adventures of Bart (Cleavon Little), a sheriff brought to tiny Rock Ridge as part of a nefarious plan to run the people out of town, making room for a new railroad. How? Did I mention that the sheriff is a ni*BONG*?

Once Bart, with the help of the town drunk, Jim The Waco Kid (Gene Wilder), turns down the volume on the towns' blatant racism and earns a sliver of their respect, he helps formulate a plan to protect the people from the machinations of Hedley Lemarr (Harvey Korman). his dim-witted pal Governor LePetomane (Brooks at his loopy best) and their army of bad guys, including Slim Pickens and Alex Karras, as the infamous bear of a man, Mongo. The plan leads to one of the more ridiculous endings seen in a Brooks film, as well as one of the funniest. 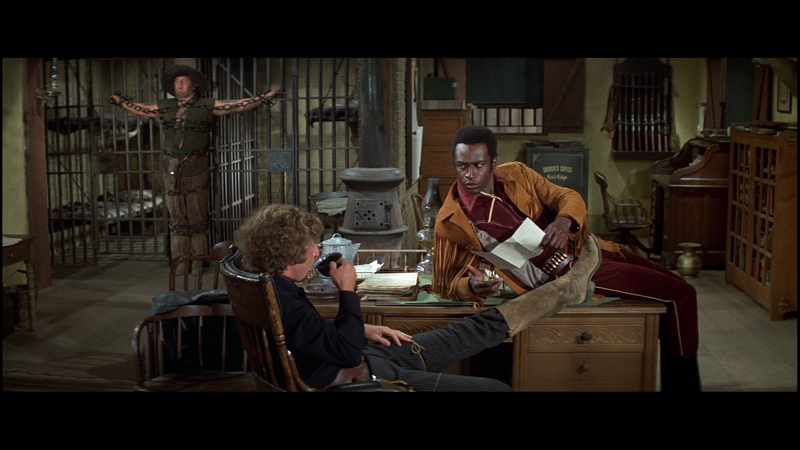 The jokes, written by a committee including Brooks and Richard Pryor, come fast and furious, ranging in sophistication from clever word play to kindergarten fart jokes. By keeping it all moving and varied, they make the experience accessible to everyone, while still aiming a bit higher for those who get the jokes. It's all held together by a talented cast, lead by the incredible likable on-screen duo of Little and Wilder. Little's ability to deliver a line with just the right level of smart-ass attitude makes for a litany of classic quotes and memorable line deliveries. There's a bit of Bugs Bunny in him, which is what makes him a hero that's instantly embraceable. It combines perfectly with Wilder's intelligent, laid-back style, a world-weary, low-key sense of humor, which makes them a classic pairing up against a movie world of morons.

Though Little and Wilder are obviously the stars, Madeline Kahn steals quite a few scenes as the sexy German songbird Lily Von Shtupp. Armed with a ridiculous accent and the kind of beauty that makes it shocking that she's so funny (sorry, but it's true), she makes every scene she's in worth watching. The same goes for the deliciously evil turn by Korman, as well as Brooks, who lets it all hang out as the corrupt leader of the state. Sticking to the fringes of the film, popping in to deliver a flurry of comedy jabs, he acts as a humorous spice Just thinking about him presiding over his governmental meetings is enough to incite giggles.

One of the more interesting aspects of this film, and one that's only truly revealed itself over time, is how politically incorrect the movie is. It would be rather impossible to pull this movie off today. Thinking of the many quotable lines, so many arise out of situations involving racism, like the first meeting in the jail between Bart and Jim, which hinges on their skin colors. Of course, in the hands of Brooks, Pryor, Little and Wilder, it never becomes aggressive or insulting; instead playing as simply true and funny. Jim says it best: "What did you expect?... These are people of the land. The common clay of the new West. You know... morons." It's one of the clearest examples of how Brooks' comedy was able to be edgy yet avoid being mean-spirited while remaining hilarious. 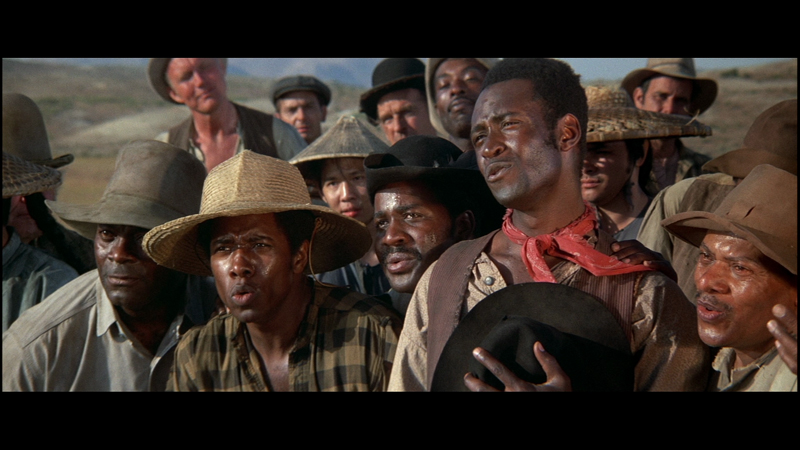 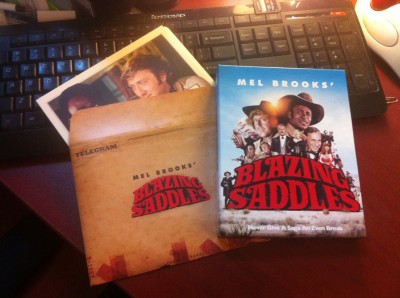 This new 40th Anniversary edition of Blazing Saddles arrives on one disc inside a standard Blu-ray keepcase which is held ub a very sturdy slipcase featuring wrap-around art. Though the cover leaves something to be desired (why are Little and Wilder there twice?) the back, with Brooks in his Native American character is a nice touch. (the marketing shpiel is on a removable panel.) The disc has Warner Brother's standard static menu with options to watch the film, select scenes, adjust the set-up and check out the special features. Audio options include English DTS-HS Master Audio 5.1, and Dolby Digital 1.0 tracks in French, Spanish (Castillian and Latin), German and Italian (the last two of which aren't mentioned on the box.) Subtitles are available in English SDH, French, Spanish (Castillian and Latin), German, Italian, Danish, Finnish, Norwegian and Swedish (and again, those final six aren't listed on the box.)

The Quality
Though talk of a new master preceded this release, it doesn't look like that was the case. This time around, we get a 2.40:1 1080p, AVC-encoded transfer (unlike the previous VC-1 release) and the picture looks better than we've seen it before, but overall it's an inconsistent presentation. Some scenes look tremendous, with sharp detail, deep black levels and bright, vivid color, while other scenes (like the townspeople watching the raid on "Rock Ridge") are noticeable dull, like there's a gauze or something over the image. Noise in some scenes is actually distracting, while others (for instance, when Bart crashes on Jim's desk) everything, from fleshtones to black levels, is stunning (check out the lighting on Little's face in that scene.) And throughout the film, dirt and damage are evident, if you pay attention. You're not going to see massive hairs or anything, but it's hard to miss the blemishes if you have an eye for detail (especially on larger screens.) I will admit though, this is the first time I noticed the flying horses.

The 5.1 DTS-HD Master Audio track very similar in structure to the previous Dolby Digital track, but it's definitely got a bit more warmth to it. A lossless version of the original mono sound would have been preferred, but what's here isn't bad, with the dialogue crisp in the center channel, and some music enhancement in the surrounds, though mainly in the front of the room, as the rear channels come up surprisingly light, with little in terms of atmospherics or score. Listening during Lily's big musical number, you expect more of the crowd or the music, but the rear is quiet. The low-end isn't very active here either.

The Extras
First up, the short piece on Kahn found on previous releases is not included (likely a rights thing, since it came from Lifetime.) It wasn't essential, but it is always nice to remember her.

In its place, we get a nearly half-hour featurette, "Blaze of Glory: Mel Brooks' Wild, Wild West," built around a new interview with Brooks. Added to the commentary (see later), Brooks comes close to covering all aspects of the film, including the westerns that influences him as a child, his few of blaxploitation films, treating audiences as smart, the great people he worked with and the film's legacy (where he talks about meeting President Barack Obama.) An added bonus includes clips of a somewhat recent interview with Wilder (who discusses Pryor) and bits from an archival interview with Kahn. The most interesting part though is the seeming ease with which Brooks uses the N-word, when telling stories about Pryor. It's certainly shocking the first time he says it.

The rest of the on-disc extras are carried over from previous releases, starting with the "scene-specific commentary" by Brooks. Warner Brothers is still labelling this as such, despite it being no such thing. Brooks may not be even watching the film as he talks for 54 minutes, covering a variety of topics related to the movie, including the hiring of Little after Brooks' wanted Pryor in the role. I could listen to Brooks forever as he rambles on about the film and his career, but he just gives in the middle of a scene, not to be heard from again.

Approximately nine minutes of deleted or alternate scenes (seven in all) are also here, the most "interesting" of which is a TV version of the campfire scene, which has been toned down in a very expected way. These are worth a look, but don't stand up to what made it into the movie.

Something of a companion piece to the new featurette (or original to the sequel) is the older 28-mnute "Back in the Saddle," which features an expanded interview roster, including Brooks, Korman and Wilder, writer Andrew Bergman, producer Michael Hertzberg and actor Burton Gilliam (who played Lyle, one of the cowboys.) Much of the material here is covered elsewhere in the set, but it's nice to hear some different voices and perspectives on the movie.

The inclusion of the pilot for the TV series Black Bart is one of those curiosities we should always be thankful for, but it is truly bad. It's rarely a good idea to adapt a movie to the small screen, and this show, starring Louis Gosset as Bart, is just further proof. You have to dumb things down way to much to success on network prime-time TV, and when you take away that edge and replace it with a laugh track, failure is certain. But this slice of history is appreciated. 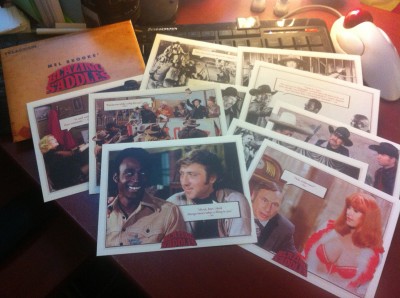 The on-disc extras wrap with the film's theatrical trailer.

Also included with the set are a set of 10 art cards (about the size of a Blu-ray case), inside a glossy-paper telegraph envelope. These thin cards with somewhat washed out color (when in color) feature scenes and quotes from the film, though the thought process for the choices made, from the quotes to the images to the decision to do many in black and white (for some reason), is unclear. Perhaps the best quotes were too un-PC to put in print? No one wanted a card of Lily on-stage? Seems like this could have been a better bonus. 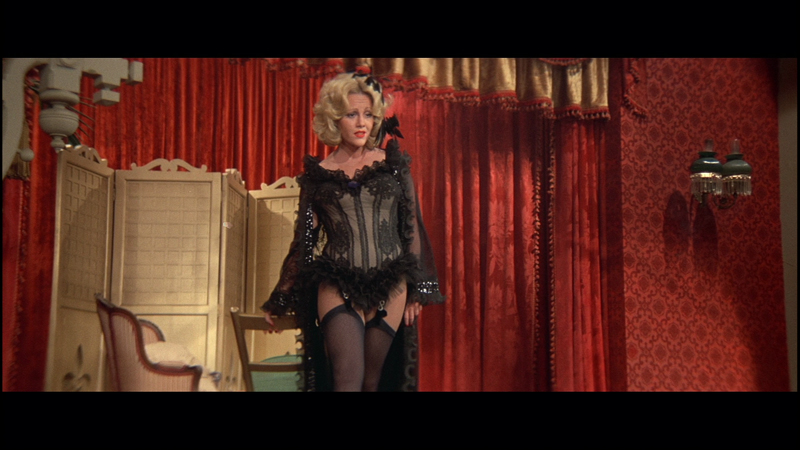 The Bottom Line
Blazing Saddles remains one of the funniest films ever made (just ask Mel Brooks, he'll tell you.) In fact, the only thing that makes it anything less than the best time you can have watching a movie is realizing how many of the wonderful people in this film are no longer with us. The movie lives on however, unaffected by changing times (if anything, a more sensitive culture makes some of the jokes land harder.) This presentation isn't exactly ruby quality, though the packaging is nice and the new featurette is a worthwhile addition. Next time (and with the way Warner Brothers has released this movie, you know there will be a next time) a cleaned up transfer and more perspective on the film's legacy would go a long way. Though the movie is too good to not highly recommend, as of now, this version is mainly for those who don't own a high-def copy already. A rental should fare most people well.