Cimarron Strip (1967-68) was instead an unusual Western television series starring Stuart Whitman. It was one of just three Western shows with episodes running in 90-minute time slots. The other two, The Virginian (1962-71) and Wagon Train (in its penultimate season only, 1963-64), alternated leads and/or had stories revolving around one-shot guest stars. But Cimarron Strip was unique in that in almost every show Whitman is front and center.

Later detective and mystery series with similar 90-minute running times, Columbo to name the most famous example, did this, too, but those were "wheel" shows, rotating with other leads on other mysteries programs. They produced a sustainable three-to-eight of these movie-length episodes per season. But Cimarron Strip did a backbreaking twenty-three 72-minute shows over just 11 months. With budgets I'm estimating in the $160,000-$175,000 per, that's essentially producing 23 movies in a single year.

Though it lasted a single season, made as it was during a time when the TV Western, so popular in the late-1950s, had become a dying breed, Cimarron Strip nonetheless is a superior show, with teleplays, casts, production values, and pedigree all way above average. It's definitely in the top-tier of TV Westerns.

Regrettably, eone's DVD set of Cimarron Strip: The Complete Series sources ancient, very inferior video masters that don't do the show justice. The series, originally a joint production of CBS and The Stuart Whitman Organization (Whitman's production company had a one-third interest, according to the actor) is apparently owned outright by CBS today, but unlike that company's pristine video transfers of similar shows like Gunsmoke, Cimarron Strip was presumably regarded as too marginal a title to warrant new masters. You'd think the demand for product on Western genre-oriented cable channels would offset the cost of high-def remastering, but apparently not.

That's a shame, for though the series is still watchable even in this inferior form, the atypical epicness of Cimarron Strip is diminished substantially in these smeary, pre-digital videotape sources. A brief but rewarding interview with Whitman, now 86 but looking surprisingly fit, is tossed in as an extra feature. 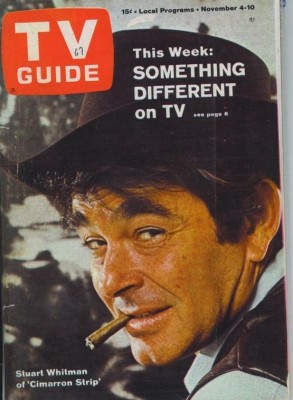 The series is set along what in the 1880s was called the Cimarron Strip but today known as the Oklahoma Panhandle. Whitman plays U.S. Marshal Jim Crown in the largely lawless region, trying to keep the peace between ranchers and homesteaders in the borderland between the Kansas and Indian Territories.

The rest of the cast consists of Jill Townsend as British immigrant Dulcey Coopersmith, who following the death of her parents joins her father's partner, Scotsman MacGregor (Percy Herbert) in operating the spacious Wayfarer's Inn. Also in the regular cast is Randy Boone as young newspaper reporter Francis Wilde.

Cimarron Strip was created by Christopher Knopf, nephew of publisher Alfred A. and the son of writer-producer-director Edwin H. Knopf. Christopher had a busy career on television, writing for anthology series and as a producer of this and, much later, the short-lived Equal Justice (1990-91). His screenwriting credits are varied, to say the least, from the Ray Harryhausen ‘50s almost-classic 20 Million Miles to Earth (1957) to Robert Aldrich's superb and underrated Emperor of the North (1973).

It was a classy production all the way. No less than Maurice Jarre (Lawrence of Arabia) wrote the rousing main title theme, shot from a helicopter as Whitman, on horseback, tears through picturesque Western country. (Unlike many Western stars, Whitman really could ride well.) And where most Western series rarely strayed beyond driving distance of Los Angeles, on Cimarron Strip the crew ventured as far away as Bishop, California, Utah and Arizona.

The TV Western was fading fast by 1967, with Gunsmoke, Bonanza, and The Virginian, all long-established, the only major shows still airing, a far cry from the late-1950s when the genre completely dominated the prime time line-up. But as good as Cimarron Strip was, it also faced fierce competition from both ABC (Batman and Bewitched) and NBC (Ironside).

Some criticized the show's supporting cast, but Townsend, Herbert, and Boone are all just fine. Rather, the show is much more Marshal-centric than CBS's similar Gunsmoke was by this point, which was focusing less on Marshal Matt Dillon (James Arness) and more on that show's supporting cast and guest stars. And that, in some respects, is one of Cimarron Strip's strengths. That the show so much revolves around Whitman's character is what makes it interesting, recalling the earliest and in some respects best Gunsmokes of the 1950s. That said, the first aired episode, "Journey to a Hanging," hits the ground running, missing the opportunity to carefully introduce and provide some needed backstory on the show's characters. On Gunsmoke this wasn't necessary because many viewers were already familiar with the popular radio series that preceded it, though even that series offered a pre-story introduction by John Wayne.

Despite the extreme length of each episode, to say nothing of the daunting schedules it took to produce them, most Cimarron Strips don't feel padded or budgetarily compromised, at least not very much, nor do they look rushed, exhibiting top-tier production values by 1967-68 TV standards.

In the video interview, Whitman is justly proud of the show's high caliber of scripts, and it's worth pointing out that one episode, "Knife in the Darkness," is nearly worth the cost of the set all by itself. Written by Harlan Ellison during a busy period of ups ("The City on the Edge of Forever") and downs (The Oscar), the episode transposes the elusive Jack the Ripper from London to the Oklahoma Panhandle, in a clever script moodily directed by the normally undistinguished Charles R. Rondeau. Set almost entirely over the course of a single, fog-shrouded evening, the episode is further enhanced by one of composer Bernard Herrmann's last television scores. Westerns rarely attempt horror-suspense genre fusing but this one really works and, at its best, is even scary. It's only unfortunate the video transfer isn't up to the level of the show.

As noted above, only the video transfers of Cimarron Strip disappoint, especially considering the set's SRP, and really do this way above-average series a major disservice. They are, perhaps, 20 or more years old based on their smeary, murky appearance. To expect pristine transfers on a program this obscure (and too short-lived to be desirable in syndication) probably isn't realistic. A shame, though. Episodes are spread across eight single-sided discs with a running time of more than 27 hours. The mono audio is acceptable, but not great. English SDH are included.

The lone supplement is an interview with Stuart Whitman running less than ten minutes. Considering his hard-drinking reputation (he recalls one such incident when Broderick Crawford guest-starred and the two drank their lunches together) he appears amazingly fit and coherent today. He speaks very fondly of the series, recalling for instance the warm party held for Townsend when she married Tom Sutton (not the same-named comic book artist), Whitman's stunt double, and Whitman remains proud of his dedication to the series, in refusing to follow departing producer Leonard Freeman, who reportedly wanted Whitman to star in Hawaii Five-O.

What might have been a major release is thwarted by the use of long-outdated video masters, but the components that make Cimarron Strip the fine series that it is still shine through, if murkily so. Recommended.