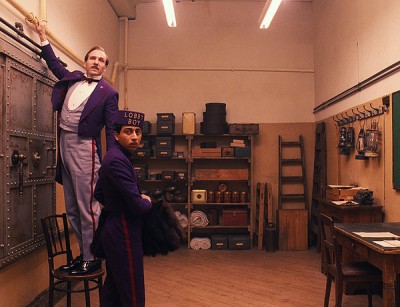 I think we are officially in the second phase of Wes Anderson's career.

The Grand Budapest Hotel is nothing short of a delight. It is a sugary, multilayered confection, as colorful and complex and precariously stacked as the courtesans du chocolate that become an important plot point in the movie's narrative. The Grand Budapest Hotel is the sort of movie that you want to dig into wholeheartedly with the biggest spoon you can find, shoveling as much as you can into your mouth, but the more you dine on Anderson's decadent creation, the more you will want to dissect it and separate the parts and savor every flavor on its own.

The story, which is Anderson's homage to a semi-obscure writer named Stefan Zweig, is a story within a story within a story, narrated by a writer in his old age (Tom Wilkinson) reminiscing on a tale he heard as a younger man (when he was Jude Law), told to him by an aging millionaire (F. Murray Abraham), detailing where his fortunes began (back when he was played by newcomer Tony Revolori). And, of course, the whole thing is the book itself being read by a fan sitting at the writer's grave. Anderson cleverly distinguishes the writer's version from the "original" by switching aspect ratios from the more standard widescreen to the classic Academy size (the square "full frame" as early DVD adopters know it), a nod back to the important films that inspired him once upon a time. 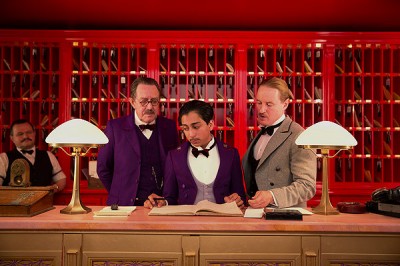 Not that it's hard to tell the two apart on their own. The tale told by Zero (Abraham/Revolori) is a fantastical concoction full of eccentric characters, anachronistic quirks, and a bizarre divide between heavy and light, dark and innocent, the kind of childish scenario told with a grown-up vocabulary that has been Anderson's raisin d'être since he came into his own with his second feature, 1998's Rushmore. How The Grand Budapest Hotel represents the MkII of his incomparable oeuvre is that it solidifies his move from a more reality-based cinema into a strange otherworld that exists within its own story space. Sure, The Royal Tenenbaums and The Life Aquatic with Steve Zissou had magical inventions and characters who were anything but "real," but much of what made those movies interesting was how those characters existed in a recognizable dimension. Steve Zissou stepped out of his nature documentaries and off his boat and was confronted with a reality he otherwise sailed the seas to escape. Richie Tenenbaum was made of Glass [sic] and shattered when life did not live up to his concept of it.

The Grand Budapest Hotel exists somewhere closer to the imagined landscapes of Roald Dahl (a la The Fantastic Mr. Fox), while also being the daydream idyll of the children of Moonrise Kingdom. The Grand Budapest Hotel is the realization of that movie's more special moments, with rudimentary special effects and a naïve representation of violence and heartbreak that is as bloody and gruesome as a Grimm's fairy tale but approached with the same devilish glee and wonder as we all had the first time we heard those original stories. It's almost as if Anderson, distraught by the labels his harshest critics pasted on him, retreated further into a land of his own design. Where the haters live seems rather lackluster, anyway, so who needs 'em?

For the plot-minded amongst you, The Grand Budapest Hotel's driving fable is the story of Monsieur Gustave (Ralph Fiennes, in his most whimsical and witty performance to date), the concierge of the titular resort when it was at its height, sometime before an unnamed war, set in a nonexistent European country. Gustave takes the young Zero under his wing right when one of the dandy man's geriatric lovers (Tilda Swinton, who apparently replaced Angela Lansbury) passes away and bequeaths him a priceless painting, titled "Boy with Apple" (a symbol of innocence meeting original sin). The dead woman's children, lead by her murderous son Dmitri (Adrien Brody), is looking to keep hold of all facets of their mother's fortune, and so they frame Gustave for her murder and set off a chain reaction of mishaps, double-crosses, and spilled secrets. The Grand Budapest Hotel is a farcical chase movie smuggling a nostalgic cargo. Darkly comic, subtly surreal, and deceptively shallow, the depths it plumbs are perversely human. Anderson has never met a graveyard he can't pass with a jaunty whistle. 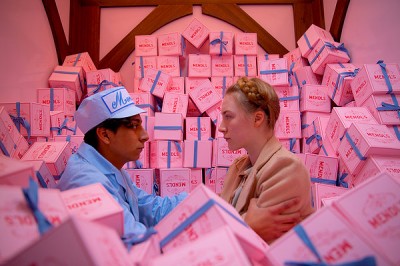 Outside of Fiennes' energetic performance, and maybe Willem Dafoe's turn as the human version of the rat he voiced in Fantastic Mr. Fox, it's hard to single out any other actor for their work here--the standard of quality is excellent, but the ensemble is too interconnected to separate. The full cast is a who's who of past Andrson performers (Jason Schwartzman, Bill Murray, Harvey Keitel, Ed Morton, Jeff Goldblum, etc.) and a handful of newcomers to the tribe (Law, Saoirse Ronan, Léa Seydoux, Mathieu Amalric). Some of them come and go in the space of time it takes to type their names, but each is essential, the parts forming a well-planned whole, an animatronic amusement-park attraction where each new piece requires the one preceding it. Fiennes and Revolori (who is, admittedly, out of his depth even in the sidekick role) are the sole constants. Their only other companion for the duration is Alexandre Desplat's score, a combination of European folk traditions, classical flourish, and the cinematic orchestration of Georges Delerue.

I wish I could have seen The Grand Budapest Hotel a few more times before writing this. Once is not enough. Ideas have not entirely coalesced. I know there is much I missed. Every corner of the hotel is packed with as many details as the interiors of the spaceships in 2001: A Space Odyssey; I want to slow the movie down and read every sign, study the stitching on the costumes, and just stare at all the gorgeous colors. I want to savor the pithy dialogue and run my fingers through all the plot elements and feel the way they fit together. What has preceded this closing paragraph represents the first thoughts that came to mind, the initial words to travel to my fingers. This is a line a kajillion of my critical colleagues will likely use, but The Grand Budapest Hotel is someplace I plan to check into again and again. I envy you if you have yet to visit the first time. You're in for something special. 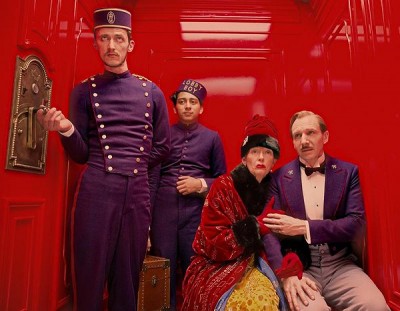