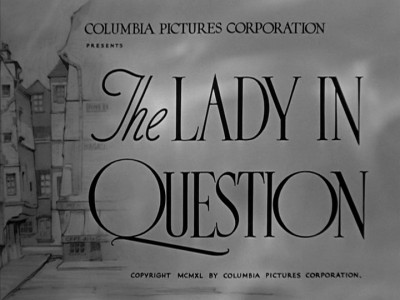 This initial teaming of Glenn Ford and Rita Hayworth by director Charles Vidor is a far cry from the more famous 1946 noir Gilda in terms of tone, but 1940's The Lady in Question is not all that different when it comes down to theme and story. The light comedy could almost be a prequel to its darker successor. Slap a colon in the title, make it Gilda: The Lady in Question or The Lady in Question: Gilda, Chapter One and you might actually fool some people into believing it.

As silly as it sounds, consider the possibility. In 1946, Ford would play Johnny, a hoodlum who once upon a time was jilted by Hayworth's sexy Gilda. They reconnect years later in South America when Johnny gets a gig working for Gilda's new husband, a notorious gangster. The love of the same woman pits the worker against his boss.

Flashback six years and Johnny is living with his father in Paris, though this time under his original name, Pierre. He likes astronomy and hopes to gaze at the stars for his entire life. That is, until he lays eyes on Natalie (Hayworth). Their paths cross because Pierre's father, kindly bicycle shop owner Andre (Brian Aherne), is an overzealous juror on a murder trial where Natalie is the accused. It's said she seduced a young man and forced him to steal from his own father to pay for her lavish lifestyle; she claims innocence. The orphan girl with no clue to her own lineage has a knack for wrapping men around her finger. First there is the Hungarian taxi driver that adopted her, then there is Andre, who, post-acquittal, offers her a job and a new name. It's while working in the bicycle shop that the newly christened Jean starts cultivating affection with Pierre, who will make his own smitten father a bit of a cuckold and ultimately resort to the same drastic measures as the dead man Natalie/Jean/Gilda was accused of killing before things are set right again and they can ride a tandem bike off into the sunset.

While my tongue-in-cheek synopsis focuses rather heavily on the pulpier aspects of The Lady in Question, eschewing the fact that it's really a silly romantic comedy, I don't actually fudge any of the facts. From a pure plot standpoint, the two movies line up pretty well. Particularly if you consider Ford's dopey performance of Pierre as the naïf. He plays the teenager rather broadly, though perhaps fittingly, jumping between the kid being a smirking know-it-all and an inexperienced innocent who doesn't know hardly anything. He's the perfect patsy, just waiting to have Rita Hayworth break his heart and turn him into a hardened criminal.

Vidor was an expert at filming Rita Hayworth, and he and cinematographer Lucien Andriot foreshadow Gilda's famous onscreen arrival in the later picture when Natalie first meets Pierre face-to-face in the bike shop. That smile and the flip of her hair as she turns to greet him--it's the kind of come-hither move that could ruin thousands of men. There's no image of Hayworth that is more iconic (not even her poster in The Shawshank Redemption). Natalie/Jean provides the actress with a rather good role, no matter how slight the material. She is nervous and contrite in the early scenes in court, cautiously happy at the bike shop; she gets tough with the masher who lives next door (Edward Norris), but then is anxious and frightened at being found out. The romantic scenes with Ford and his telescope are really all on her shoulders. We buy it because we are in love with her, not because Ford is that convincing of a Don Juan.

Gilda aside, The Lady in Question can stand on its own three reels as a cheery little rom-com. Vidor and screenwriter Lewis Meltzer have fun with the story, including allowing for B-stories for some of the more colourful side characters. (Evelyn Keyes as Pierre's love-crazy little sister is a hoot!) It's not the best work of anyone involved, not by a mile, but it's still funny and sappy and enjoyable in all the right ways. 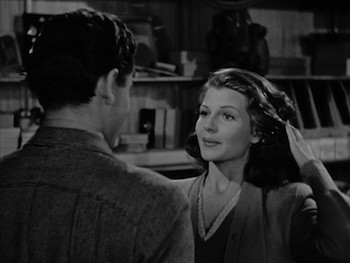 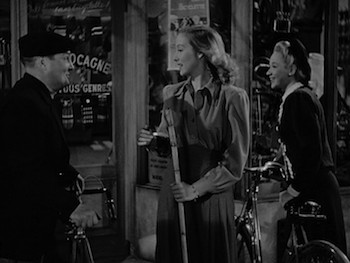 Video:
The Sony Choice Collection is offering The Lady in Question as a manufacture-on-demand DVD with a full-frame, black-and-white transfer. The overall picture quality is decent, without too many marks on the print and fairly good resolution.

Sound:
The mono soundtrack sounds fine, with no noticeable distortion or extraneous noise.

FINAL THOUGHTS:
The Lady in Question is a fun romantic comedy from 1940, offering a dash of mystery and mild slapstick in service to a multi-layered story about a woman with a criminal past who may or may not still be dangerous. Rita Hayworth is, unsurprisingly, charming as the actual lady in question, and this is yet another of her excellent collaborations with director Charles Vidor. Glenn Ford is a bit off the mark as the young lover, but excellent supporting performances from Brian Aherne, Irene Rich, and Evelyn Keyes make up for it. Recommended. 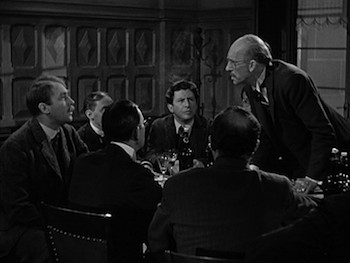 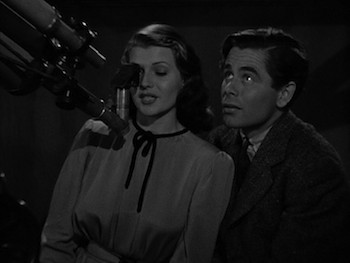