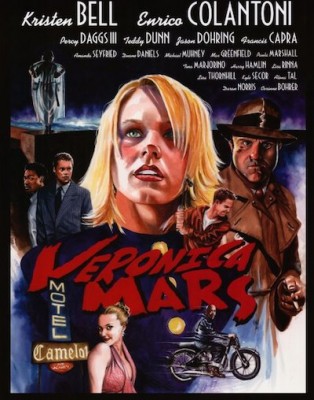 Call me a typical film critic philistine, but I didn't see the 2004-2007 high-school-set detective series Veronica Mars before I was assigned to review this new feature-film continuation. In all fairness to me, I did squeeze in the first few episodes of the TV show before I sat down to watch the 2014 Veronica Mars, to get a sense of the show's tone and style.

Now, considering my vast knowledge of the series, I can confidently say that this new movie pretty successfully captures the flavor of a typical episode, except that the cast is noticeably older and, perhaps coincidentally, the storytelling style is a little more leisurely. Then again, this could also be because the story gets to stretch out over a full two hours. Some of my fellow philistines have complained that Veronica Mars spends too much time on supporting characters from the TV show who don't particularly serve the main push of the film's story. This did not bother me. I also do not support the common quibble I've read that the film is too constrained by a TV visual vocabulary so that it never becomes truly cinematic.

For me, it boils down to this question: Is the film entertaining? Yes. Case closed.

Cowriter-director Rob Thomas, who created the series, does a decent job of recapping the broad strokes of the original story in a tidy opening sequence. In the mid-'00s, Veronica Mars (Kristen Bell) was a smart and sassy teenage private investigator, helping her former sheriff dad Keith (Enrico Colantoni) with his P.I. cases and working on others as well. She had a love-hate relationship with the extremely wealthy ruling class of her fictional hometown, Neptune, California, as typified by her hot-and-cold romance with Logan Echolls (Jason Dohring), the troubled son of a movie star.

As the film opens, Veronica has successfully escaped from Neptune's clutches -- or so she thinks. Despite a burgeoning career as a New York lawyer and a quiet domestic life with Stosh "Piz" Piznarski (Chris Lowell; the internet tells me this character was introduced in season 3), Veronica finds herself drawn back home, after Logan becomes the number one suspect in the murder of his current girlfriend, pop star and Neptune High alum Bonnie DeVille. These events also happen to coincide with her high school class's ten-year reunion, and while Veronica tries to avoid attending, just like Martin Blank, she finds herself sucked back into the high school world she thought she had left behind.

The prime directive for Rob Thomas and his crew obviously was to meet fan expectations; after all, more than ninety thousand of those fans helped pay for the production of the film via a well-publicized Kickstarter campaign. But, watching the completed movie, it is clear that his ambitions didn't end there. The finished film is an interesting mix of mystery, comedy, romance, and social critique. Only that last element ends up under-served in the finished product: a subplot about Neptune's corrupt sheriff's department unjustly targeting underprivileged, innocent suspects just peters out into a frustratingly pat resolution.

The film offers a generous roster of returning cast members, including many faces who are familiar from their work outside of this show, like Breaking Bad's Krysten Ritter, New Girl's Max Greenfield, and former child star Tina Majorino, plus some fellas that later appeared on Thomas's similarly beloved but prematurely cancelled show Party Down, Ryan Hansen and Ken Marino. Party Down's Martin Starr also joins the assortment of new visitors to the Veronica Mars universe, such as Jamie Lee Curtis as Veronica's potential boss, Gaby Hoffman as a potential murder suspect, and James Franco as a potentially self-aware James Franco.

Fans of the series are sure to be more intensely moved or shocked by the turns of the plot, but newbies like myself should still have a good time with this cleverly scripted, enthusiastically performed whodunnit.

The Blu-ray
The Blu-ray comes with a code for an Ultraviolet streaming copy.

The Video:
No complaints. There is no noise or banding in this AVC-encoded 1080p 2.40:1 transfer. The black levels are strong. The color palette is a little muted, but the colors themselves are nicely saturated. The image looks a little soft, but this is so consistent throughout the film that this seems not to be a mistake, but a stylistic choice, maybe to give this digitally-shot movie a more analog feel.

The Audio:
The original DTS-HD MA English 5.1 audio delivers a nicely balanced soundtrack. The movie is mostly talk with only a few brief action sequences, so the surround speakers only really come into play during the music cues. The music sounds good, though, with a surprisingly robust bass response that I'm sure startled my downstairs neighbors when I initially had the movie turned up too loud. The disc also offers dubbed Dolby French 5.1 and Dolby Portuguese 5.1 audio tracks, with English SDH, plus French, Spanish, and Portuguese subtitles. For some reason, the Portuguese audio and subs options are not listed on the packaging, but they are definitely accessible on the disc.

Final Thoughts:
If you're interested in getting into the Veronica Mars TV show, it's probably worth holding off on this movie, since there are plenty of spoilers and plot twists that could make going back feel less than rewarding. Otherwise, if you don't want to bother with the TV show and just want to watch a movie, I expect you'll still be solidly entertained. Also, if you are a diehard who already bought the digital download of the movie the moment it went live, you might still find yourself getting a kick out of the new supplements on this physical release. In other words: Recommended.