All That Heaven Allows (Criterion Collection)

The Criterion Collection // Unrated // June 10, 2014
List Price: $39.95 [Buy now and save at Amazon]
Review by Stuart Galbraith IV | posted June 21, 2014 | E-mail the Author
Douglas Sirk's All That Heaven Allows (1955), a slyly subversive romantic melodrama starring Jane Wyman and Rock Hudson, like other Sirk (and Ross Hunter-produced) films from the same era, has a strange history. When it was new, the film was a big, mainstream success though dismissed by critics as a trashy women's weepy. Twenty-five years later it was regarded as high camp, and a particular favorite among gay audiences who howled at its comparative excesses and the irony of closeted homosexual Rock Hudson's standing as the manliest of manly straight men. Later still, Sirk's films were rediscovered; movies that before appeared to be emblematic of conservative, outdated, and by this point even comical 1950s values instead were recognized for what they really were, in All That Heaven Allows' case a scathing critique of upper middle-class mores and societal pressures to conform and sacrifice one's very identity.

Compact at just 89 minutes, All That Heaven Allows is an emotionally satisfying, character-driven film that's also contextually fascinating, gorgeously designed, and except for a couple of terrible process shots, adroit in recreating small town New England during the fall-colors and snowy winter seasons on the stiflingly hot Universal backlot in Southern California.

Criterion released All That Heaven Allows to DVD way back in 2001, but their new Blu-ray is an immense improvement, with a much sharper image and vastly superior color reproduction. Supplements effectively include an entire second feature, Rock Hudson's Home Movies (1992), a rather one-note speculative documentary mixing blurry film clips with a fictitious posthumous diary, read by actor Eric Farr. 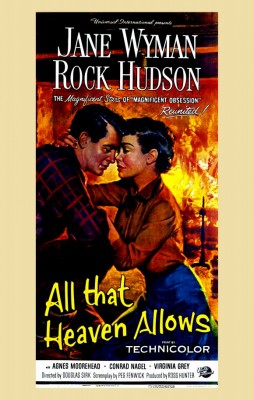 Cary is, however, drawn toward her handsome - and much younger - gardener, Ron Kirby (Rock Hudson). She's attracted to his quiet confidence and passion for nature, particularly in his ambition to give up gardening to raise trees, work that will require years of patient nurturing.

Unexpectedly, he's equally attracted to her as well, especially after he takes her to a party hosted by his friends Mick and Alida Anderson (Charles Drake and Virginia Grey), a once conventional couple who quit the rat race and embraced simple, unpretentious living. The lively party (where Ron sings a quasi folk-calypso tune and whose guests include - gasp! - a Hispanic couple) is a stark contrast to the status-jockeying of the earlier country club affair.

Soon Ron asks Cary to marry him, but she's consumed with worry about what others will think, and for her the town becomes a veritable minefield of potential scandal. She's comparatively wealthy while he's working class; she's ten years older and he was the family gardener ("Your gardener?" asks Sara, incredulous) when her late husband was still alive. What if everyone in town wrongly assumes they'd been having an affair? What will the children say? What if Mona gets ahold of the news?

The themes of All That Heaven Allows are easy enough to spot, though rather daring for such a mainstream entertainment. The picture contrasts Ron's idyllic life, restoring an old mill into a beautiful home, his contented mind, unconcerned with "the unimportant things" Cary and her circle attach their very identities to. He's able to admire the beauty of a simple spruce while Cary's son Ned admits, "All I know about trees is that they make good logs."

The country club set is with a few exceptions (such as the town's doctor, played by Hayden Rourke) depicted as narrow-minded, callous, and snobbish, people who fill their empty lives delighting in the suffering of others. Ron's restoration of a Sutherland teacup Cary admires is contrasted with "the last refuge of the lonely woman": a television set. When Cary's children all but destroy her life and, thinking they're giving her a swell Christmas gift, present her with the latest model, she's positively horrified (Sirk's camera cleverly has Cary see herself in its reflection). It's one of 1950s cinema finest, most uniquely depressing moments. In a much earlier scene the fragile nature of hers and Ron's relationship is symbolized when Cary accidentally knocks the teacup from a table, irrevocably smashing it to bits. When I watched the Blu-ray with a friend the perfectly timed and staged scene made her jump.

Publicity for the film emphasized the reunion of Wyman and Hudson, who'd starred together in Sirk's earlier (and also excellent) Magnificent Obsession (1954), and they're perfectly cast here as well. Wyman, eight years older than Hudson, is believably ordinary and not glamorous while Hudson, at his most handsome, exudes both an understated masculinity and a quiet sincerity. He really was an underrated actor.

All That Heaven Allows was filmed on Eastman Color stock though the original theatrical prints were by Technicolor. For the Blu-ray, Criterion and Universal went back to the original camera negative and the results are for the most part stellar. The film has a few terrible process shots (notably mattes showing Ron's mill in long shot) and at the 1:19 mark some moderate damage/fading is visible, particularly around the edges of the frame. During this time Universal, then Universal-International, typically cropped their open-matte films for 2.00:1 widescreen, though apparently weren't too strict about this and, according to Criterion's research, All That Heaven Allows was exhibited every which way from 1.37:1 full frame to 2:1. They've chosen a 1.75:1 ratio, though 2:1 might technically have been the screen shape preferred by Sirk and director of Photography Russell Metty. In any case the colors, so important to the film's look, really "pop" far better than all previous home video versions, while the blacks are much blacker. Several key scenes with the leads standing in front of a floor-to-ceiling window in Ron's mill are stunning here. The mono audio (English only, with SDH in that language) is excellent, and the disc is region "A" encoded. This is a dual format edition, with the same content included across two standard DVDs.

The set adds markedly to what was on Criterion's earlier DVD release. New this time is the feature documentary Rock Hudson's Home Movies (1992), Mark Rappaport's speculative, self-consciously clever examination of Rock's sexuality through blurry film clips, seemingly from the filmmaker's VHS collection, cut in such a way that innocent lines of dialogue from Rock's movies take on gay-entendre meaning. (One such line occurs in this film, in which Ron, encouraging Cary to tell the children about their relationship, has her asking him, "You want me to be a man?") Though initially amusing, the cutting becomes smug and repetitious while ignoring the heart of the matter: Hudson was openly gay among his friends - it was Hollywood's worst-kept secret - while the movie-going public completely accepted him as a straight leading man. And why not? If straight men can play gay characters, why not the other way around? Hudson was, after all, an actor. Why impose a hidden agenda in films that, by and large, just isn't there?

Also new is a literary reading-type audio commentary by film scholars John Mercer and Tamar Jeffers-McDonald; a 1982 interview with Sirk for French television; "Contract Kid: William Reynolds on Douglas Sirk," apparently originating from Germany; and a booklet featuring essays by Laura Mulvey and one from 1971 by Rainer Werner Fassbinder.

Also there is the previously released excerpts from Behind the Mirror, a 1979 BBC profile of Sirk; and the film's trailer, in high-def.

Not to besmirch those who insist on viewing All That Heaven Allows as high camp (and, admittedly, director John Waters hilariously spoofed Sirk in his brilliant Polyester) but, for me, this is one of those films best appreciated when today's normally jaded, cynical audience permit themselves to surrender completely to its heavily-stylized dramatics. Taken that way, All That Heaven Allows is still emotionally powerful stuff with a lot to say about the American middle-class than most first realized. It's one of the best films of the 1950s and, on Blu-ray especially, is a DVD Talk Collector Series title.