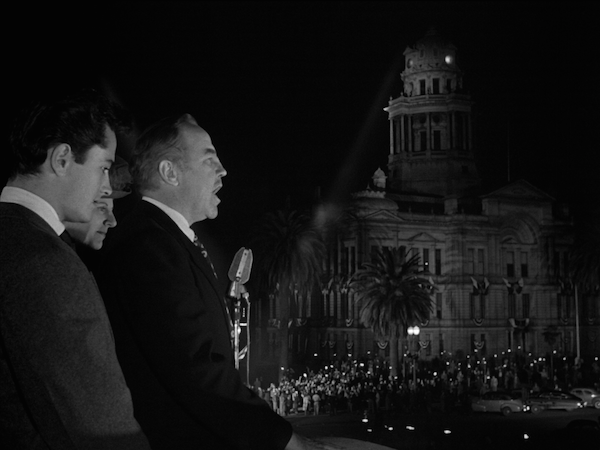 The Best Picture Academy Award winner of 1949, All The King's Men, tracks the political career of Willie Stark, a would-be reformer turned corrupt big shot. Inspired somewhat by Louisiana's Huey P. Long, Willie Stark has an unreal, larger-than-life quality to him -- especially as portrayed in the film by Broderick Crawford, who won a Best Actor Academy Award for his efforts.

We're first introduced to this unusual creature when big-city newsman Jack Burden (John Ireland) is told to spill some ink on Stark's efforts to be elected as a small-town treasurer. Stark runs his campaign in the face of a corrupt local government that sees no reason to allow someone else to nab a piece of their pie. Burden is impressed by Stark's moxie and dedication to the truth, and he writes glowing feature stories about this singular honest man in politics. Burden's articles don't make much of a dent, as Stark doesn't get elected as treasurer. Stark instead devotes himself to becoming a lawyer and gets a last laugh of sorts. When a faulty fire escape -- commissioned by the corrupt town treasurer -- collapses at the local elementary school and kills some school children, Stark takes the parents' case and sues the city.

Even in these early scenes, Crawford makes it subtly apparent that beneath Stark's humble facade is a man hungry to be at the center of everyone's attention. When some shady campaign organizers offer Stark the chance to run for governor, he jumps at the chance. Burden tags along, even after his newspaper refuses to print stories about Stark anymore. Eventually, Burden puts two and two together and realizes that Stark is being set up to split the working-class vote so that the incumbent has a better shot at hanging onto the governor's office. He confronts one of the architects of the set-up, Sadie (Mercedes McCambridge, who also won the Oscar here), and she readily confesses. She spills the beans to Stark and offers him some booze -- and herself -- as comfort.

Although he has laid off of the drink for the sake of his wife, Stark reacts to liquor like Popeye reacts to spinach. Soon, this political patsy is an unstoppable firebrand. It's too little too late for this election, but Stark manages to build up support from the state's "hicks" and slides into office four short years later. Of course, Stark is a fast learner who understands that you can't get elected by just winning over some yokels; you've got to make some shady deals with some shady people.

From this point on, it's clear that Stark is a lost cause morally. He has now gotten what he has always wanted (even if he would never admit it before), so he will continue to stop at nothing to protect what he has gained. The ex-reporter Burden, who once filled sheaths and sheaths of paper praising Stark's honesty, takes his disillusionment in stride -- or so we are left to guess. In his portrayal of Burden, John Ireland never seems to satisfactorily solve the emotional or practical question of why his character continues to stick around Stark, even after Stark stabs both Burden and Sadie in the back by having a not-so-secret affair with Burden's long-time sweetheart Anne Stanton (Joanne Dru). Of course, maybe it got lost in the translation to the screen. All The King's Men was adapted by writer-director Robert Rossen from Robert Penn Warren's nearly five-hundred-page novel and reportedly ran over four hours before being ruthlessly chopped down at the last moment to a more conventional running time. So... maybe the answer to Burden's illogical loyalty lies on the cutting room.

Of course, it could just be Ireland's wooden interpretation of the character, obscuring the filmmaker's intention. Ireland's blank performance is one of many stiff turns in the film. Most of the cast recites their dialogue with consistent, bland earnestness. The major exceptions are the two Oscar winners: Crawford as the blustery thug politician and McCambridge as the cynical scorned woman. Their fiery, sometimes hammy performances are truly the main attraction.

Even setting aside the dated, square-jawed acting, All The King's Men hasn't aged extraordinarily well. The film's semi-hard-boiled approach to human nature and politics is entertaining, but the whole thing pales next to Budd Schulberg and Elia Kazan's later masterful portrait of the creation and ruin of a folksy megalomaniac, A Face in the Crowd. Don't get me wrong: All The King's Men is solid... but it's the kind of film that tends to play better lingering vaguely in one's memory than while one actually sits down and watches it. 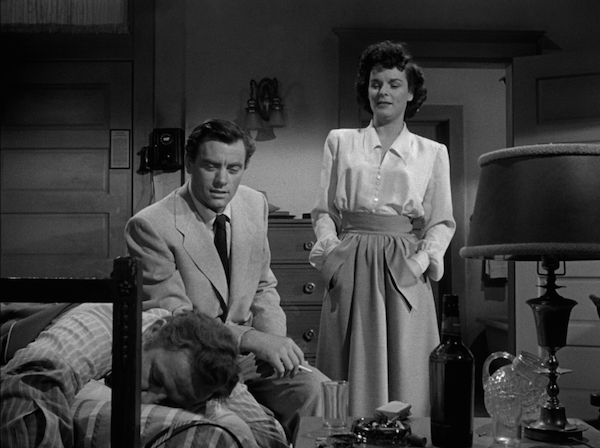 The Blu-ray
All The King's Men comes to Blu-ray in a limited edition of 3000 copies. Inside the case is an 8-page booklet with photos and an essay by Julie Kirgo.

The Video:
The AVC-encoded 1080p 1.37:1 transfer is excellent. Sporting natural-looking film grain, the image has no apparent damage. While a handful of shots look a little dull, this seems to be the fault of the source material. The blacks are rich and there's an excellent range of contrast.

The Audio:
The DTS-HA MA mono audio similarly seems to be free from any damage, hiss, or crackle. It's not a particularly showy sound mix, but it comes through clearly, with the dialogue plainly differentiated from the music and effects. The disc provides English SDH.

- Louis Gruenberg's score, isolated from the rest of the sound mix and presented in DTS-HD MA 2.0 audio.

Final Thoughts:
The unforgettable performances by Broderick Crawford and Mercedes McCambridge guarantee that All The King's Men will always have a place in the American film canon. Twilight Time's presentation lacks any meaningful bonuses but delivers in the A/V department. Recommended. 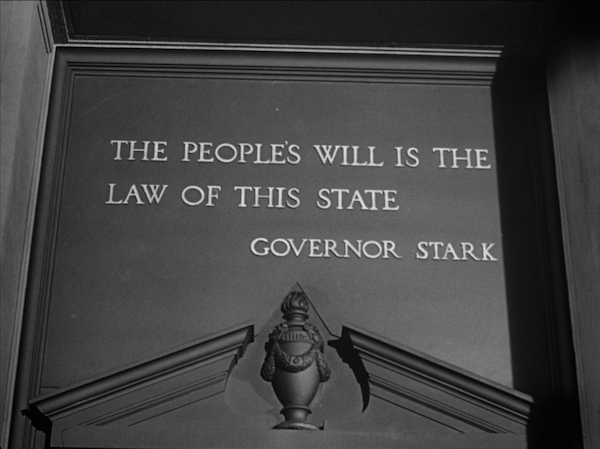