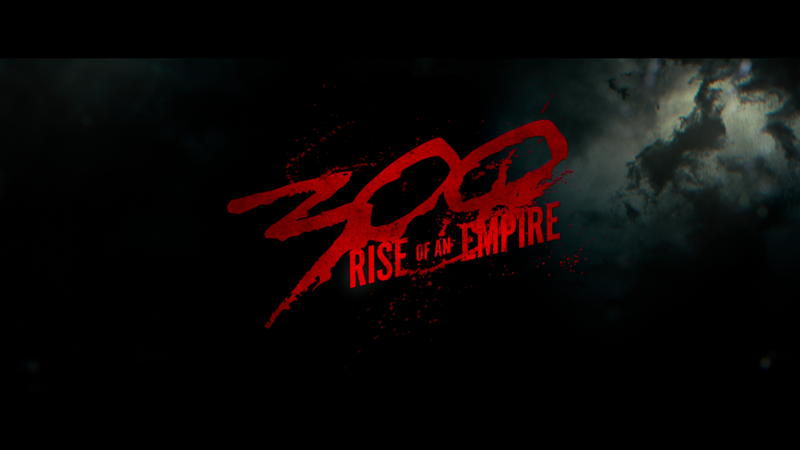 
The Movie
I won't bother defending Zack Snyder as a filmmaker, as anyone who really cares about film has certainly made up their mind regarding his work, but I will say that I pretty much always enjoy watching his movies from a visual perspective. (Leaving the theater after watching Sucker Punch was one of my most disappointed cinema moments, but it sure looked good.) 300 was no exception, as Snyder, writing a film for the first time, adapted comics legend Frank Miller's graphic novel into a work of high-octane cinematic art, and it had the added bonus of being a damn fun time.

A sequel was probably inevitable, especially once the movie made back its production budget in its opening weekend, but, as Snyder notes in a featurette on this disc, the ending didn't exactly lend itself to a follow-up. So, instead of telling further stories, it was determined that this film would tell a parallel story, taking place at a similar, though not concurrent time as the original. The meat of the plot is that Artemesia (Eva Green), the sister of Xerxes, the big baddie of the original 300, is headed to war with a group of Spartans led by Themistocles (Sullivan Stapleton). The big difference is the battle this time takes place at sea.

The film alternates between big speeches and big fights, without much else in between. Well, except for one of the most ridiculous sex scenes ever. However, when we're not enjoying a topless, grunting Eva Green, we're getting Spartans running into action, again and again, spinning and slashing, spinning and slashing, over and over. There's more digital blood split this time around, but it's all completely pointless, because it's so excessive. Heads decapitated, limbs removed… it's just a numbing experience all around. 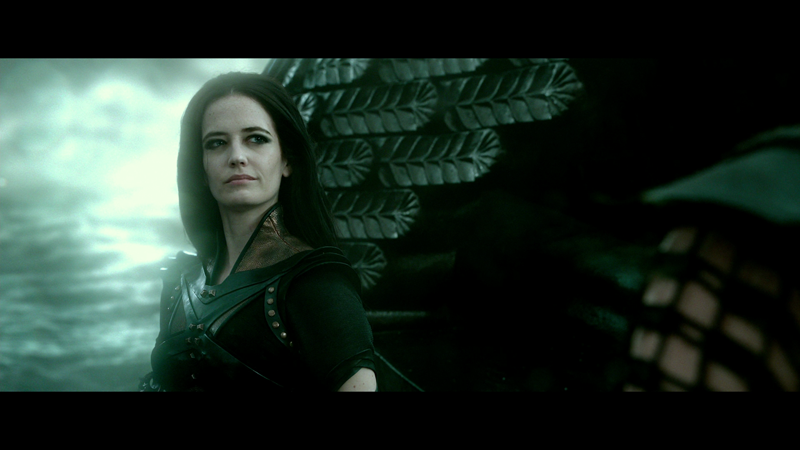 The action may be excessive and the plotting repetitive, but the story can't take all the blame, as there are plenty of concerns with the visuals, which sometimes suffer from "Bay-Transformers" syndrome, getting too close to chaotic action, which makes everything a mess. There's also an odd habit at work of abusing slow motion, like someone mentioned that it was part of Snyder's style, but never explained or illustrated how he used it. 300 wasn't a masterpiece of storytelling, but at least it worked as a cohesive whole. Though there's a similar hyper-stylized look to the action, it doesn't feel nearly as enjoyable.

Whoever was going to take over the helm from Snyder (who serves as a a producer and co-screenwriter here) had his work cut out for him, so it was an odd choice to hand the keys to a commercial director whose only feature- film to this point was the good, but small indie film Smart tPeople. The resulting film looks very much like the original 300 in some ways, but it's not quite right, lacking in those graphic touches that made the original so striking. In discussing bootleg design once, it was said to me that it's often better to be far from the original and get it right than to be close and get it wrong, as being close makes the mistakes far more obvious. That's certainly the case here. Perhaps trying something entirely new would have resulted in something entirely better. 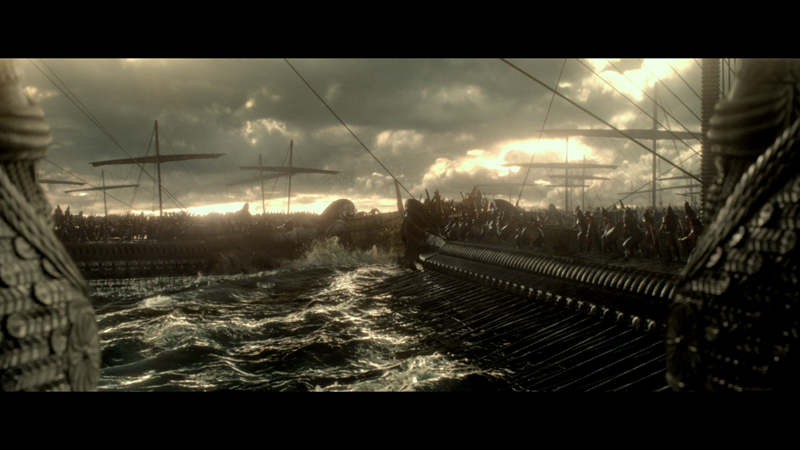 The Discs
300: Rise of an Empire arrives on one Blu-Ray disc and one DVD, in a standard-width dual-hubbed Blu-ray keepcase (inside a foil-coated slipcover.) The attractive animated menu (hey, WB...why does this movie get a slick menu, while your other movies get that generic garbage?) gives options to watch the film, select scenes, adjust languages and check out the extras. Audio options include English DTS-HD Master Audio 7.1 and French, Spanish and Portuguese Dolby Digital 5.1 tracks, while subtitles are available in English SDH, French, Spanish and Portuguese (with both Portuguese tracks going unmentioned on the box.)

The Quality
The 2.4:1 1080p, AVC-encoded transfer is gorgeous, with bright, vivid color (where appropriate,) deep, dark black levels, and a high level of fine detail (showing off a wealth of textures and visual minutae) that combine to make for a wonderfully sharp image (when allowing for the fog in some scenes.) The image is so good that it, unfortunately, makes the digital effects on the blood look simply ridiculous, like CG before shaders are applied. Film grain is even and consistent though, and there ar no issues with digital distractions. If only so much attention had went into the film.

As good as the video is on this disc, the 7.1 DTS-HD Master Audio track might be even better, with so much action giving the audio plenty to do. Despite the maelstrom going on, the mix handles every little detail with precision and power, swirling the activity throughout the surrounds, when not positioning it exactly, while dialogue (when focused upon) is crystal clear in the center channel. As one might expect (or hope for) from an explosive film like this, the low-end .blows the doors off. It may not be a great film,

The Extras
The extras kick off with "Behind the Scenes: The 300 Effect," a four-part featurette. "Three Days in Hell" (7:08) looks at the motivation behind making the film (apparently Miller is partially to blame) and how it was positioned in relation to the original, with interviews with Snyder, Murrom several of the actors and lots of producers, while "Brutal Artistry" (9:08) looks at the visuals of the film, including the set, costume and prop design. Most of the same people, including Snyder and Murro, return, along with designer Patrick Tatopolous. The secpmd piece puts footage from the first film next to the sequel, and the comparison is not even close. For whatever complaints people have about Snyder's films, he makes things look good in a way that's hard to replicate.

The third part, "A New Breed of Hero" (4:49) puts the spotlight on this film's new hero (as well as the actor portraying him,) and includes a couple of historians to provide some perspective on the real-world person he is based on, making this a bit more interesting than the rest. "Taking the Battle to Sea" (8:52) naturally looks at the new field of combat in this movie, which, thanks to green-screen technology, is filmed without water. Unfortunately, for some of the people involved, there are some things said in these featurettes that will confirm some negative thoughts viewers may have about the movie, but the insight is appreciated.

"Real Leaders and Legends" (22:52) is an impressively in-depth review of the film's interpretation of the true story, as well as the very idea of storytelling, courtesy of a small team of historians. The material here is fascinating, especially the portion that explains what happened to the characters after the events of the film. "Women Warriors" (12:22) has something of the same framework, opening with the same ideas, nd has some repetition, but this time the focus is on Artemesia and Gorgo, as well as the general experience of women in the film's settings, in the movie and in history. Then, "Savage Warships" (10:36) continues the historical parade, with more info about the boats in the film, including some amazing archival footage from 1990 of a re-creation of an Athenian ship, with an army of rowers. Together, these three featurettes, which tie the film to reality, are actually more fascinating and entertaining than the feature they suplement.

The extras wrap up with "Becoming a Warrior" (4:39) a look at the training the actors go through to become Spartans, including the differences between the training for the first film, and the enhanced overall regimine used for Rise of an Empire.

Also included i the package is a DVD copy of the film (without extras) and an Ultraviolet streaming code. 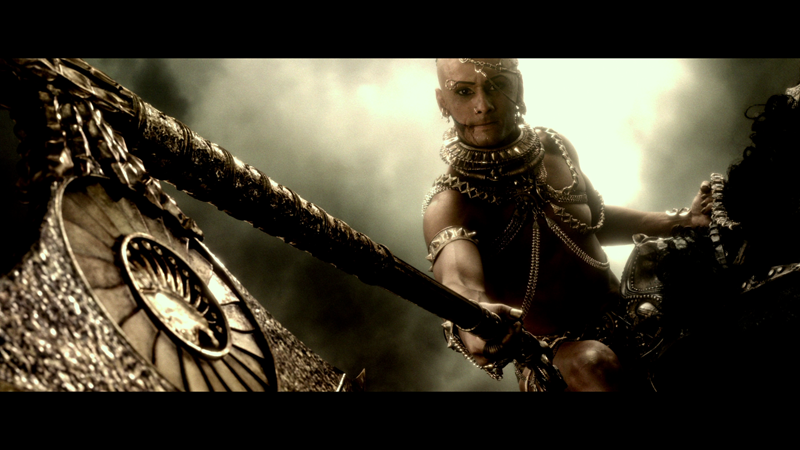 The Bottom Line
It's never a good sign for a "sequel" when it makes you question if you actually liked the original. Such is the case with 300: Rise of an Empire, which is so similar to the original, yet so perceptibly flawed, to the point where it reflects negatively on 300. A sub-par copy of Snyder's visuals is paired with some of the most repetitive battle action cinema has seen (as well as too many speeches) to create a serious let-down. On th other hand, the presentation is brilliant (to the point where it unfortunately further shows off the movie's deficits) and there's some really nice bonus features (though, like the movie, they still pale in comparison to the first time around.) If you need to watch another movie about Spartan warriors, you could give this one a shot, but you'd probably get more satisfaction out of revisiting the original.