Warner Archive // Unrated // February 19, 2014 // Region 0
List Price: $29.99 [Buy now and save at Amazon]
Review by Stuart Galbraith IV | posted April 3, 2014 | E-mail the Author
As any Three Stooges fan worth his salt will tell you, the team originally consisted of Moe Howard, Larry Fine, and Moe's older brother Shemp Howard acting as stooges opposite ringleader Ted Healy as a roughhouse act in Vaudeville. With the coming of talking pictures, the foursome went to Hollywood to co-star in the Fox feature film Soup to Nuts (1930), but soon after that Shemp left the act and so his pole position in the Stooge pecking order was taken over by yet another Howard brother, kid brother Jerry, rechristened "Curly" for the act. Ted Healy & His Stooges then appeared in shorts and features at MGM before Moe, Larry, and Curly broke with Healy and, beginning in 1934, began a long-running series of two-reel comedies at Columbia Pictures. When Curly was incapacitated by a stroke in 1946, Shemp rejoined the act and remained a "third stooge" until his sudden death in 1955 at the age of 60.

The various incarnations of the Three Stooges, of course, have been perennially popular ever since, with all of the shorts and nearly all of their feature film appearances now available on DVD. So popular are the Three Stooges comedies that interest has spilled over into other areas, such as Shemp's "solo years" between 1932-46, of which much less is known. Fans of classic film comedy are generally aware of Shemp's appearances in numerous Universal features of the 1940s such as The Bank Dick (1940) with W.C. Fields and In the Navy (1941) with Abbott and Costello. He made appearances in Another Thin Man (1939) at MGM and Murder Over New York (1940), a Charlie Chan mystery, for Fox, and back at Universal he even played an improbable Sinbad the Sailor in Arabian Nights (1942), a Jon Hall-Maria Montez costumer.

But why did Shemp leave the Stooges just as their film career was blossoming, and how did he fare as a solo comedian? The Vitaphone Comedy Collection, Volume Two, Shemp Howard (1933-1937) helps explain things. This busload of two-reel comedies is rarely better than fair, but for fans of the Stooges and of Shemp Howard particularly, they helpfully track and shed light on his career trajectory and that in and of itself is pretty fascinating. 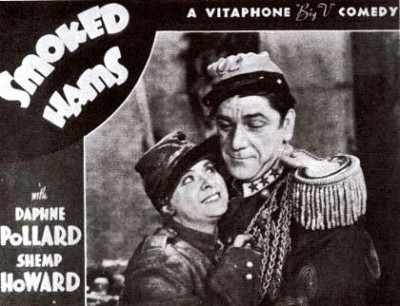 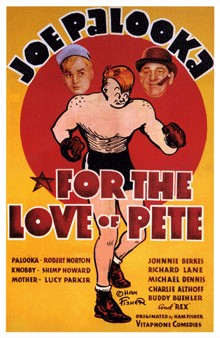 Later in life, and long after Shemp had died, Moe Howard usually stated that the reason Shemp decided to leave the act circa 1932 was because Shemp had been offered the part of Knobby Walsh in Vitaphone's Joe Palooka series. But Moe's memory was clearly off, as the first Joe Palooka film, For the Love of Pete, wasn't released until 1936, at which point Shemp had been in movies without Moe, Larry, and Ted Healy since 1933's Salt Water Daffy, a Vitaphone short headlined by Jack Haley (The Wizard of Oz).

Today it's generally accepted that the real reason Shemp left the Stooges was his intense dislike of Ted Healy, a volatile, abusive alcoholic whose addiction apparently grew worse as the team found success in Hollywood. And there may have been other reasons. Healy became a big star, and by all accounts his Stooges were undercompensated for their contributions to the act, with Healy implying they could easily be replaced at any time with other comics. In other words, it's not unreasonable to speculate that Shemp more than brother Moe (who loved Healy like a brother) distrusted Healy and was looking for better pay and more secure employment.

Further, it's important to consider that while Soup to Nuts had been shot in Los Angeles, Shemp's Vitaphone shorts were all made in New York, meaning that while Moe, Larry, and Curly were appearing in MGM shorts and features in Culver City, and later, separated from Healy and ensconced at Columbia in Hollywood during their first few years there, Shemp was based on the East Coast. He was also famously multi-phobic and may have wanted to work in more familiar surroundings (he and his brothers were born in Brooklyn, not far from Vitaphone's studios on Avenue M), and/or he, as the eldest brother, may have felt obligated to look after his aging parents and other relatives.

In any case, the 20 shorts exemplify Shemp's rise from uncredited supporting player to co-lead and headliner. And even though Shemp received second billing in the later Joe Palooka films his character, Knobby, manager to the dumb heavyweight champ, is at the center of things.

Missing though available elsewhere are Shemp's earliest Vitaphone appearances opposite Roscoe "Fatty" Arbuckle (in his last comedies prior to his untimely death), and other stars like Haley, Gus Shy, and in four shorts (plus the earlier feature Soup to Nuts), stuttering comedian Roscoe Ates. The earliest film in the set, Gobs of Fun is a typical example, with Shemp appearing uncredited in a vehicle for Dutch dialect comedian Charles Judels (later in Laurel & Hardy's Swiss Miss and the voice of Stromboli in Disney's Pinocchio) and Omaha-born George Givot (who voiced another Disney Italian stereotype, Tony the restaurateur, in Lady in the Tramp). They played a French and Greek sailor, respectively, in this extraordinarily unfunny comic teaming. However, in this and other Vitaphones Shemp's appearances were usually memorable, and it's pretty clear he was getting most of the laughs.

By the time of My Mummy's Arms, Shemp's stature had risen to co-lead, in this short playing opposite Vaudevillian and silent era comedian Harry Gribbon (Keaton's The Cameraman). That short is a pretty generic Mummy spoof, though interesting as some of the gags anticipate those found in Shemp's later Stooge shorts. Watching comedies like this one also notices a Vitaphone stock company of actors, including prolific and perennially flustered Donald MacBride and a pre-typecast movie gangster Sheldon Leonard, here playing an Egyptian.

The "middle period" of this set finds Shemp paired thrice with Daphne Pollard, an Australian actress and dancer on the New York stage beginning in 1908. She joined Mack Sennett at the end of the silent era and her fireball of energy and diminutive stature (reportedly 4'9" but she may have been even shorter) made her a good partner for excitable, short (about 5'2") Shemp.

Pollard is best remembered today for her subsequent roles in Laurel & Hardy movies, particularly the short Thicker Than Water (1935), the team's last short comedy, and the feature Our Relations (1936), playing Mrs. Hardy in both. Likewise, around this time another Laurel & Hardy alumnus, director Lloyd French, began helming many Vitaphone comedies, 18 with Shemp. French had been an assistant director at Hal Roach Studios on many of the team's best silent shorts (Two Tars, Big Business) before helming or co-helming some of their sound features and shorts, including Pack Up Your Troubles (1932), Busy Bodies and Dirty Work (both 1933) prior to moving to Vitaphone and beginning with the Shemp-Pollard Smoked Hams.

French brought something of the Roach touch to these Vitaphones, which generally play a bit better than the pre-1934 comedies. However, as comedies the ones in this set are no better than fair, and the plurality are mediocre, a contrast to Volume One's bright, funny Fatty Arbuckle shorts. Shemp reportedly punched up their weak scripts with ad-libbing, more Popeye-like asides really, but he certainly contributes to what fun there is. Unlike the Arbuckle shorts which frequently ventured out of the studio to interesting Brooklyn exteriors (a welcome contrast to overly familiar Hollywood backlots and nearby neighborhoods), most of the shorts here fall back on cheap soundstage exteriors with painted backdrops which add to their impoverished look. And, while in Hollywood Warner Bros. (majority owners of the Vitaphone facilities) was a bigger studio than Columbia, Columbia's short subject unit contemporaneously lavished more time, money, and attention on their shorts. Most of the Vitaphones were shot in three days while Columbia's shoots sometimes took twice as long to make.

Near the end of Shemp's stay Vitaphone launched its short-lived "Joe Palooka" series, two-reelers adapted from Ham Fisher's 1930-1984 comic strip. The shorts followed the Jimmy Durante feature Palooka in 1934 (with Stuart Erwin as the prizefighter), but Vitaphone's series lasted just nine shorts all released during 1936-37. A fellow named Robert Norton inherited the role of good-natured Joe, but Norton, who did virtually no other films, proves to be a miserably bad actor who makes Buster Crabbe look like Olivier, and the shorts themselves are no better than routine, though once again Shemp goes a long way toward livening them up. (It's odd that in later years Moe Howard would point to this series as Shemp's great career opportunity. Though the comic strip undeniably remained popular for decades, it's unlikely these specific shorts turned up much after their initial release and are justly forgotten. Even Monogram's later feature film series has all but vanished.)

Shemp himself is absent from the last two Palooka shorts. Perhaps he saw the writing on the wall, that Warners was gradually moving its short subject production to the West Coast. He enjoyed much success as a comic supporting player at Universal especially and began appearing as a supporting player and later a star of his own short subject series at Columbia before being coaxed back into the Stooge fold. The rest, they say, is history: eep-eep-eep!

The 20 two reel comedies, running between 18-22 minutes in length, thereabouts, are presented on two DVD-Rs and helpfully in chronological order. Picture-wise, these 1.37:1 standard frame, black and white shorts are a bit softer and in rougher shape than the better-known Columbia two reelers from the same period, but generally look fine, and the mono audio is acceptable. The discs are region-free. No Extra Features.

Despite a dearth of inspired screen comedy, Shemp Howard's presence alone makes this a must-have for hard-core Three Stooges fans, and they shouldn't be disappointed. The mild-at-best laughs are compensated by sheer interest in these long-forgotten short comedies, which intrigue for myriad other reasons. Recommended.