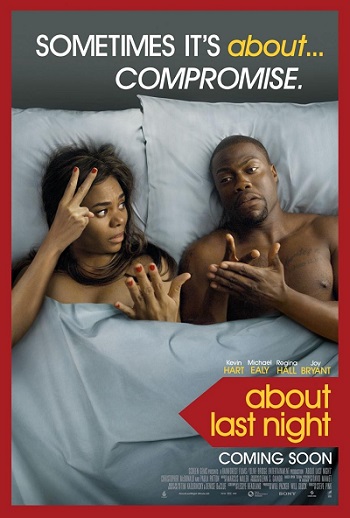 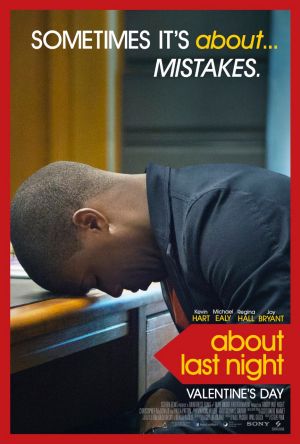 Even if it wasn't a direct remake of a mildly successful Brat Pack movie, About Last Night would feel awfully familiar. In fact, I missed out on the Rob Lowe-Demi Moore version from '86, and I still predicted everything that was going to happen in this inoffensive but too frequently boring relationship dramedy. The remake's writer, Leslye Headland (Bachelorette), has a good ear for dialogue, and she manages to make a lot of stand-alone scenes feel surprisingly truthful and funny, but her structure is about as cookie-cutter as it comes. When a character mentions a few times that Thanksgiving is her favorite holiday, you better believe that that's when everything is going to fall apart.

Danny and Debbie (Michael Ealy and Joy Bryant) meet thanks to an awkward sort-of double-date with their friends who have already hooked up, Bernie and Joan (Kevin Hart and Regina Hall). That double-date leads to a one-night stand, which leads to a series of booty calls, which quickly enough leads to Danny and Debbie moving in together. Meanwhile, in the first twenty-five minutes of the movie, Bernie and Joan's relationship burns brightly and then burns out. This frees the characters to snarkily comment and give questionable advice on Danny and Debbie's slower-developing relationship. Guy-talk and girl-talk scenes frequently punctuate the proceedings.

Presented in the context of four seasons (a choice which unintentionally brings to mind the superior relationship dramedy (500) Days of Summer), Danny and Debbie's romance has two speeds: happy and sex-filled or unhappy and plagued by superficial complications. Unfortunately, neither speed is all that fun to watch. While Ealy and Bryant are extremely attractive and quite likable, their sex scenes are pretty generic and chaste. Rather than getting swept up in the characters' supposed passion, I found myself wondering about the practical aspects of their love scenes: Is he going to have to find a tailor to replace all those buttons she popped off his shirt? How long did she make that dinner that he just pushed on the floor so they could have sex on the table? Their difficulties are just as by-the-numbers, and are all pretty quickly resolved: Debbie fears she might be pregnant (she's not), Danny loses his job (he quickly finds a more fulfilling one), both partners are presented with opportunities to cheat (neither one does).

Director Steve Pink (Hot Tub Time Machine) obviously feels more at ease dealing with the comic dialogue scenes than the serious relationship stuff. He can easily pull off a prolonged setpiece where the two men and the two women riff on the shift in power dynamics that come when you're the first one in a relationship to say, "I love you." However, it seems more bizarrely elusive for him to consistently approximate the way two people in a yearlong romantic relationship would interact.

While the scenes between Hart and Hall's characters, Bernie and Joan, don't necessarily feel more realistic than the main story, the film is vastly improved by any moment in which they are featured. Their oddball chemistry and amped-up energy not only create the biggest laugh-out-loud moments, but their scenes give the film a sense of forward momentum lacking in most of the plodding Danny-Debbie scenes. (The film runs just a shade over 90 minutes without credits, but both my girlfriend and I initially thought the movie was over two hours long.) Whether they are providing too much information to their friends about their bedroom activities during the good times or gleefully sabotaging each other's new relationships during the bad, Bernie and Joan seem to be the only elements of this film with an invigorating sense of purpose.

The Blu-ray
The Blu-ray is packaged with a download code for Ultraviolet streaming.

The Video:
While almost all major films are now shot using digital systems that have a fairly film-like look, shooting at night or in low light still seems to be the Kryptonite of digital cinematography. I would bet that the AVC-encoded 1080p 2.40:1 transfer with which we are presented is faithful to its source, but its source is a little inconsistent. The daytime and brightly lit scenes all look nice, with good contrast, excellent fine detail, and pleasing color saturation. The night scenes and low-light club scenes have a more smeary video look that becomes susceptible to ghosting during moving shots or when actors move within the frame.

Cinematographer Michael Barrett also shoots many scenes without a strong key light, leaving the actors' faces almost entirely in shadow. I was able to make out their faces on my screen, but this style might be too dark on certain monitors.

The Audio:
The main DTS-HD MA 5.1 English audio track is crisp, clean, and fairly busy, with a lot of atmospheric effects in the surround channels. The source music cues sound powerful and clear; sometimes the cues are even a little too loud and threaten to overpower the dialogue, but mostly it's not a problem. The disc also offers dubbed DTS-HD MA 5.1 French audio and Dolby 5.1 Spanish audio tracks, plus an English Descriptive Video Service track. For readers, there's a selection of standard English, English SDH, French, and Spanish subtitles.

(HD, 14:38) - This is a pretty standard featurette, with the cast and co-producer Will Packer discussing the story, the characters, the sex scenes, etc. Oddly, neither director Steve Pink nor writer Leslye Headland are interviewed anywhere on the disc.

Final Thoughts:
The 2014 version of About Last Night is a reasonable time-killer, which will probably find a comfortable home being replayed on daytime cable for the next decade or so. If you can't wait for its TBS premiere, I'd say Rent It.