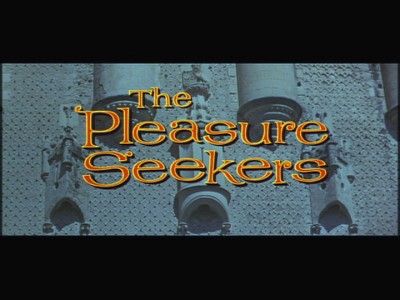 Director Jean Negulesco goes back to the well once more to remake his hit Three Coins in the Fountain. Renamed The Pleasure Seekers, and transplanted from Rome to Madrid, this tepid romantic comedy from 1964 fails to recapture the old magic. The fountain, as it were, has run dry.

Ann-Margret tops the marquee as Fran, an American actress and dancer working in Spain. She rooms with Maggie (Carol Lynley), another ex-pat, this one toiling as a secretary for the boss of a news agency (Brian Keith). They are joined by Maggie's friend Susie (Pamela Tiffin), a lost soul who enjoys art and, like her new companions, seeks love. All three girls are single, and all find Madrid to be lacking in eligible bachelors. Whether rich or poor, the men of Spain are either hung up on antiquated customs, judgmental of American girls, or Don Juans with little regard for the hearts they break.

Maggie has previously run afoul of that type of scoundrel, and despite warning Susie about Emilio (Anthony Franciosa), the new girl falls for the playboy anyhow. Not that Maggie is brimming with sage wisdom. She pines for her married employer while being clueless to the affection of Pete (Gardner McKay), a journalist who gets around but yet is always there when Maggie needs him. Only Fran seems to be choosing smart, falling for the handsome country doctor (Andre Lawrence) who comes to her rescue after she has a spill in the street. The only problem with him is he's too proud to take their relationship seriously until he gets his clinic up and running and can support a wife. 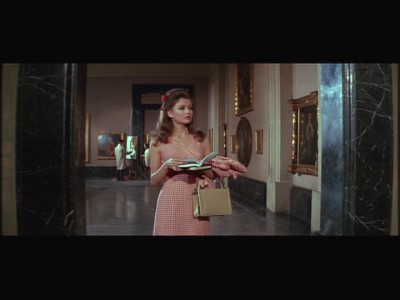 As these things go, The Pleasure Seekers follows the girls as their romantic dreams rise and then fall, becoming seemingly hopeless, only to get resuscitated in time for the expected happy ending. The scenarios are at times fun. The milquetoast Susie toys with Emilio and, for a time, beats him at his own game. Fran and her medicine man share the heat on a lovers getaway at the beach. Ann-Margret cavorts in a bikini in one of her quartet of song-and-dance numbers, and while the tunes are fairly weak and the staging lacks movement, her sex-appeal is impossible to tamp down. There are even some serious dramatic turns--most memorably when Maggie is verbally ripped to shreds by her would-be lover's wife (Gene Tierney, who makes the most of a tiny role).

The problem is, none of these elements hang together very well, and for whatever heat the individual moments manage to generate, the gaps between chill everything way down. The three lady leads are all pleasant to watch (Tiffin seems like the girl-next-door version of Claudia Cardinale), but neither Negulesco's uninspired direction nor Edith Sommer's tonally conflicted script do them any favors. The Pleasure Seekers comes off as Hollywood's attempt to squeeze an old-fashioned concept into what they imagine is far hipper clothes. The frank attitude about sex doesn't jibe with the uptight morality that wins out in the end--no matter how skimpy the nightgowns the girls wear while dodging the peeping tom across the alley. To add yet another metaphor, the frosting on this cinematic cake sure looks appealing, but those responsible forgot to add the sugar. The colorful pink and blue decoration is just chalky and bland. 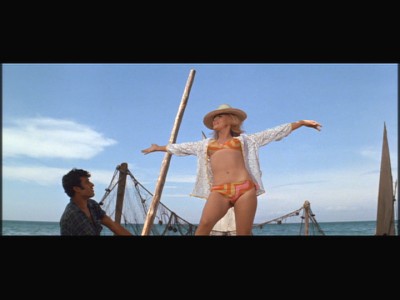 Video:
The Fox Archive manufacture-on-demand label continues its spotty treatment of its lower-tier films with a faded transfer of the otherwise bright and colorful The Pleasure Seekers. Resolution is soft, and everything looks muted. Worse, the widescreen film is shown in a non-anamorphic "picture box" format. This means that, unlike the screengrabs here, when you watch The Pleasure Seekers on a television or at full screen on a monitor, there aren't just the black bars on top and bottom, but equally wide black bars running vertically down the left and right side.s The actual image takes up maybe 50% of the screen.

Audio:
The soundtrack sounds decent. The mono mix presents no obvious problems, but also fails to dazzle in any way.

FINAL THOUGHTS:
Charming performances makes The Pleasure Seekers worth a look, but this remake of Three Coins in the Fountain is otherwise dull and lacking in legitimate romance. Jean Negulesco stumbles and falls remaking his own previous hit, failing to update the material in any way that justifies going back to the source. The presentation on this DVD doesn't really help matters. In fact, were I judging on packaging and presentation alone, I'd say skip this product altogether. But, you know...Ann-Margret is hard to resist completely, so Rent It. 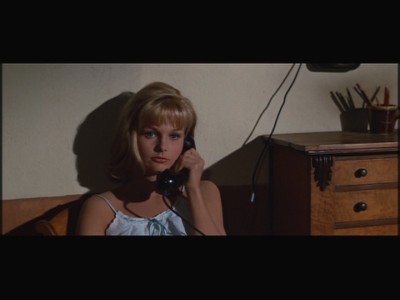