Broadway Danny Rose (1984) is one of the most charming of all of Woody Allen's films. It is a good combination between Allen's dramatic sensibilities and comedic roots. The story is one I adored since seeing the film for the first time many years ago, and it's one that still holds up as something remarkable, intelligent, and original. The central character of the story (who is also the title character) is Danny Rose, a show-business person working as a manager for some of the least desired talents in all of the business. Yet that doesn't stop him for trying.

Danny Rose helps represent ballooning teams and other oddities that other managers take a total pass on. He had successfully helped one talented individual gain success and fame (but then they ditched him for a more successful manager). It just so happens that his favorite represented talent is the formerly popular(ish) lounge singer Lou Canova (Nick Apollo Forte), who became washed up and out of luck. Rose believes in  Lou (even if everyone else doesn't), befriends him along the way, and gets him some decent performance gigs that, well, actually have an audience attending.

Trouble brews when Lou starts seeing a mistress, Tina Vitale (Mia Farrow) with connections to the mob. Lou constantly talks about getting a divorce (but never does), and he wraps Danny up inside his relationship problems. Danny reluctantly agrees to be his 'beard' and take Tina to an event for him, where he his mistaken as the new guy in Tina's life. The bad news for Danny is that her ex was a part of the mob family she's connected to and now a couple of the mob men decide to 'take Danny out' so that Tina and her ex can fall back in love (because knocking off current boyfriends is a good step in that direction, according to the Mob). Can the pair survive mobster mania?

As the dramatic events unfold, the story is told with a comedic gusto that makes the entire storytelling endeavor delightful and charismatic from beginning to end. Danny Rose is an unapologetically aloof character who means well but finds himself involved in an absurd mobster-flick, where he and Tina eventually must find a way out of their gigantic pickle. Everything about the story is so over-the-top and comedic in this regard but it lends well to everything the story similarly shares about the character Danny Rose. It's a perfect match of cinematic goodness where the odd character blends well with a odd but effectively realized storyline. 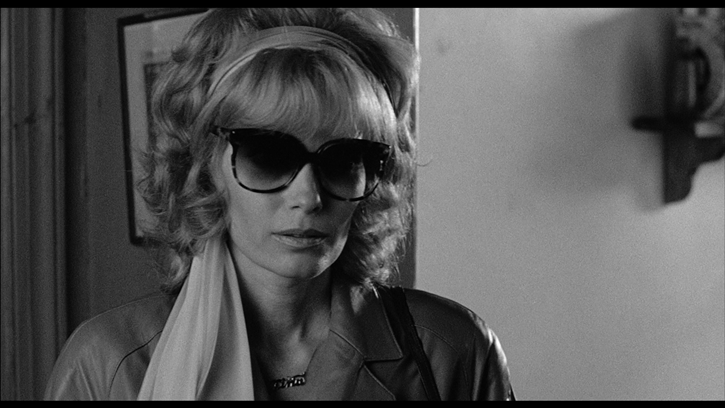 The film find's it's heart in becoming a romance between the Danny Rose and Tina Vitale characters. In exploring the characters strange yet magnetic connection, the film finds its effective balance between soulfulness and whimsy. The final act of the film is both sadly melancholic at first before it crescendos into a uplifting and joyous final scene that leaves magnetic shivers you can only get from such wonderful filmmaking.

The performances in the film are absolutely splendid all around. This film features one of Woody Allen's best performances in any of his films. He does seem to delve into the role in such a way that the Danny Rose character feels so authentic and surreal at the same time, as if the story is taken from a classic legend. (Certainly, the film's opening scene restaurant setting, where an entire group of people discuss stories they have heard of Danny Rose lends itself to the idea).

Mia Farrow is also uniformly excellent as the strong-willed and opinionated Tina. This was equally one of her most impressive parts and she manages both the comedic scenes and the dramatic weight with real gravitas. The part is one of her most enjoyable, and she makes the character as surreal and fascinating as one can find in the movies. Nick Apollo Forte surprises with an excellent performance in the role of the bumbling lounge singer who seems inexplicably drawn to both of these curiously goofy people. Forte does a great job in his comedic supporting part.

This is one of the best written and directed films to be made by Woody Allen. I consider it to be amongst his best works. The writing has great character-study moments and there are so many great lines of dialogue (which is of course the staple of a brilliant Allen film).  From script to execution, the story and the characters are a huge part of the reason the film works so well. It goes back to the origination and extends to the masterful direction. This makes the film stand triumphant as a genuine success of cinematic grandeur. 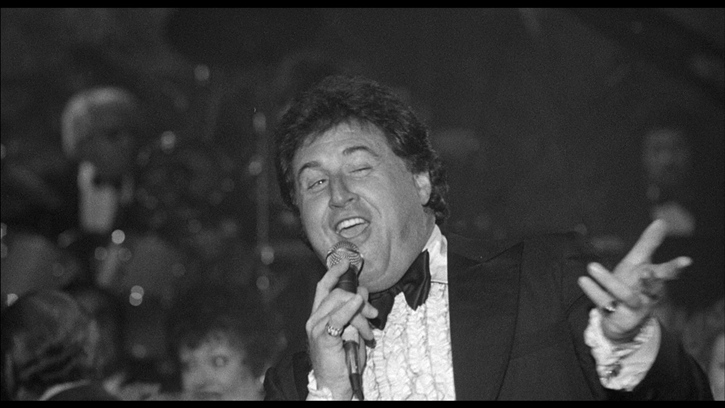 Broadway Danny Rose has one of the most unique blends of comedy and drama seen in any of the Woody Allen features. I often think of his films as being divided between one or the other. Certainly, Allen has made many straight dramas and also comedies that don't exactly attempt to be enlightening or moving in the same way most of his dramas do (these are the ones where he wants the audience to laugh more than anything).

In combining these two genres so seamlessly in Broadway Danny Rose, I think that is part of the reason this is one of his most endearing movies. The film has a zippy and lighthearted sense of humor that sways back and forth during scenes where his dialogue is curiously introspective (especially regarding the Danny Rose philosophy), and moments where the film beckons to French New Wave cinema with its ever-so-slightly off-kilter editing (with the gangster sub-plotting making one recall elements of Truffaut's Shoot the Piano Player), the lush black and white photography by Gordon Willis, and a romantic interlude towards the end that feels quite French (with the delicately placed jazz music amidst a backdrop of solemn rain pouring out as a emotional metaphor for the scene in question).

Allen's use of music in this film is typically superb as each jazz piece (and lounge-music singing) adds character and charm to the entire experience. One will actually be surprised and amazed by how much the song adds to the upbeat vibe of the story whenever the lounge music is around. It almost feels like a character itself by adding a sort of odd anthem vibrancy into the proceedings.

Broadway Danny Rose is a classic film that works on so many levels. It is  a genuine classic of cinema. The entire experience is entertaining, heartfelt, and a blast. This is one of my favorite Woody Allen films and it manages to hold up quite well. It succeeds as comedy, as drama, as something inspired by French New Wave... and, of course, as a romance. The film is a great triumph of art and craft that is well worth discovering or re-discovering again and again. 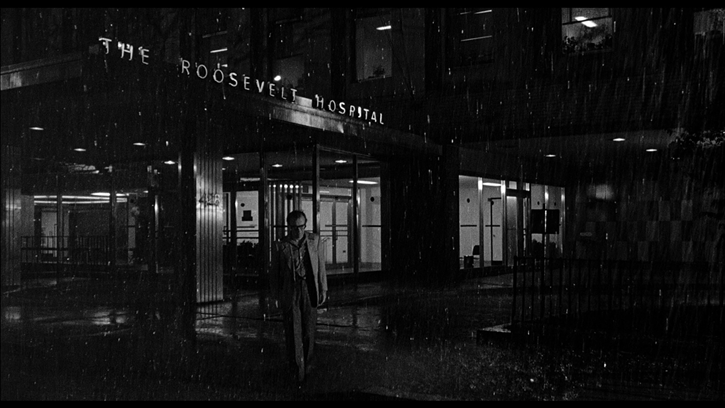 Broadway Danny Rose arrives on Blu-ray with an impressive MPEG-4 AVC 1080p encoding that preserves the filmmaking style and the cinematography achieved by Gordon Willis. The cinematic presentation is akin to viewing a quality film print. The grain and structure of the image has been left intact with no DNR or other pesky modifications. Instead, the transfer manages to both retain a healthy amount of film grain and have good contrast and clarity. Throughout the film, the lush cinematography often demonstrates amazing camera work, focusing on a given scene with a keen sense of the surrounding landscape.

Fans of Broadway Danny Rose will be hard pressed to be disappointed by this stellar transfer, which presents the film magnificently with a 35 Mbps bit-rate encode. Broadway Danny Rose has never looked better on home media before and this is perhaps the most definitive transfer we'll ever see released. The only minor drawbacks to the presentation (and it is quite minor) is that there are some occasional specks of dust or debris that are on the print and there is a bit of light flickering occasionally present on the print  but the majority of the film is clean and free from such print imperfections.

The film is presented with a lossless 24 Bit DTS-HD Master Audio 1.0 mono soundtrack. Given that the source of the audio is mono (as is the norm for most Woody Allen films) one shouldn't expect amazingly immersive audio dynamics for the film as the dialogue is at the forefront of this presentation.

However, the dynamics of the recording certainly sound much more fluid and clear with this lossless audio presentation, which presents both the dialogue and music of Broadway Danny Rose with much more 'gusto' than any previous home media release of the film.

The release contains a booklet featuring an essay about the film as written by Twilight Time's Julie Kirgo.

The on disc supplements included the original theatrical trailer and an isolated music and sound effects track presented in lossless DTS-HD Master Audio mono. The lossless music included is terrific on the standalone track, which allows listeners to hear the great music without dialogue. However, moments with no audio at all stay as such as per the norm with such inclusions. This should still make a nice bonus for fans to put on in the background. 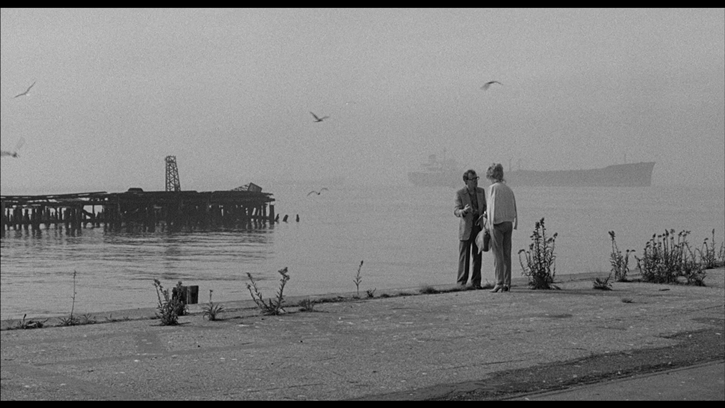 For fans of Woody Allen's films, Broadway Danny Rose seems to work on a checklist of all the great elements found within his movies and it pulls these elements all together into one amazing experience of cinematic wonder. This film stands as one of Allen's great accomplishments and as one of the best film's of the 80's.

The Blu-ray PQ is stunning (with a massive bit-rate that helps allows for a film-like presentation) and the AQ is quite good.  Fans of Broadway Danny Rose will be delighted having such a high quality copy of the film (the best kind: the kind the feels reminiscent of owning an actual film print). Twilight Time does not disappoint with this stellar Blu-ray release.