Thunder at the Border

Sony Pictures Choice Collection // Unrated // April 7, 2014 // Region 0
List Price: $20.95 [Buy now and save at Amazon]
Review by Stuart Galbraith IV | posted May 31, 2014 | E-mail the Author
Most everyone is familiar with the Spaghetti Western, the subgenre spearheaded by Sergio Leone's "Dollars" trilogy with Clint Eastwood. The huge European and Asian success (and, a bit later, in America, too) of those movies resulted in many hundreds of Italian-made Westerns produced, broadly speaking, between 1960-1980.

Few Americans, however, realize that parallel to the Spaghetti Western there co-existed a marvelous series of primarily German-made Westerns, particularly West German movies made by Rialto Film and shot on location in Yugoslavia, in the Paklenica karst river canyon of what's now Croatia.

Dominating this sub-genre was the Winnetou film series, movies based on late-19th century Western novels by German author Karl May. He wrote lovingly about the American West, even though he'd never even visited America when he wrote most them. So popular were May's stories that, long after his death in 1912, the Nazis made no effort to try and ban them during the Second World War, this in spite of their themes of racial tolerance and stories dominated by its Indian hero. (Reader Sergei Hasenecz adds, "Because Hitler himself was a fan. The Germans love the idea of the noble savage. The Tarzan books and movies are enormously popular there still, even despite Burroughs's two anti-German Tarzan novels written during World War I."

Eleven Winnetou features were made between 1962 (and thus predating the Spaghetti boom by two years) and 1968. They made a pop cultural icon of French actor Pierre Brice, who played Apache chief Winnetou and reprised the character at least twice more, in the 1980 German television miniseries My Friend, Winnetou and again in the 1998 miniseries The Return of Winnetou.

Most of the original films co-starred established American stars like Lex Barker, Stewart Granger, and Rod Cameron, and for this reason many were dubbed and released to a bemused American film market unfamiliar with Karl May and Winnetou. None of the movies made a dent in the States and were quickly forgotten.

Recently, however, there's been a long overdue if underground resurgence of interest in Rialto's Winnetou series. Partly this was prompted by the release of gorgeously remastered German DVDs (and, more recently, Blu-rays), many but not all of which include English subtitles and/or English dubbing. For the English-speaking audience willing to import them, the films have been something of a revelation. The approach to these Westerns is almost the complete opposite of their more cynical, violent, darkly comic, and heavily- stylized Spaghetti counterparts. The Winnetou movies offer by contrast classical, lushly romanticized and sentimentalized yet progressive depictions of the Old West. The best ones are real joys to watch and are even quite moving, and it's easy to see why the German market embraced them so.

Thunder at the Border (1966), in fact, is part of this German-made Winnetou series, the eleventh of twelve films, and originally titled Winnetou und sein Freund Old Firehand ("Winnetou and His Friend Old Firehand"). It's not one of the better films for reasons described below but still fairly good on its own terms. And though presented only in English-dubbed format, that version does have the benefit of co-star Rod Cameron's real voice on the soundtrack. Additionally, this Sony Choice Collection release offers an eye-pleasing 16:9 enhanced widescreen transfer of this Ultrascope (2.35:1) production. 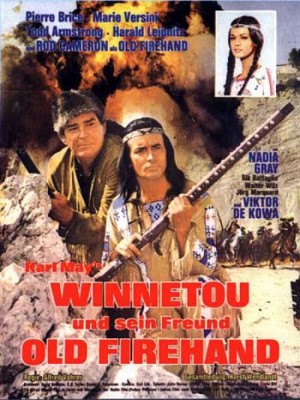 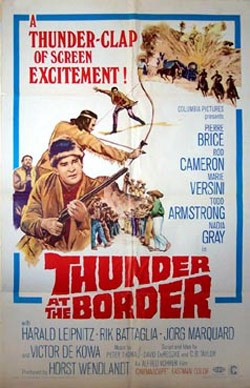 There they learn that Billy (Walter Wilz), the gambler kid brother of the gang's leader, Silers (Harald Leipnitz, who looks like a cross between Terence Stamp and John P. Ryan), is being held on murder charges by Capt. Mendoza (Rik Battaglia), the leader of a patrol stationed there. Silers threatens to wipe out the entire village unless Billy is released. Meanwhile, Tom and Nscho-tschi fall in love, while Old Firehand, reunited with old lover Michèle Durell (Nadia Gray)*, discovers she bore him a son, 17-year-old Jason, known as Jace (Jörg Marquardt).

Most of the rest of the picture riffs Seven Samurai/The Magnificent Seven, with increasingly vengeful, violent raids on Mira Monte by Silers and his men, who succeed in burning down most of the town. Aided by Winnetou and Old Firehand, the outnumbered locals desperately try to hold off the bad guys.

Winnetou, his ability to find common ground between conflicted and varied Native American tribes and white settlers (usually by getting them to join forces to battle against white criminals), and his blood-brother relationships with loner Western heroes like Old Shatterhand (Lex Barker) especially, is the heart and soul of this film series. But in Thunder at the Border Winnetou himself has very little to do after the opening scenes, where there's some pleasant interaction between Winnetou and Old Firehand. But the character isn't even around during the final moments of the picture, nor is there even a scene indicating Winnetou is aware of the blossoming romance between his sister and Tom. Further distancing this entry from other Winnetou movies is the absence of regular composer Martin Böttcher. German composer Peter Thomas wrote the slightly jazzier cues for Thunder at the Border, which are pleasant on their own terms, but in particular Winnetou's signature theme is sorely missed.

Otherwise, this entry is fairly good. Rod Cameron, a star of B-Westerns at Republic, Universal, and Monogram, was by this point in his mid-fifties but a very welcome presence and very believable as mountain man Old Firehand, making an interesting contrast to the much younger, regal-looking Lex Barker, former movie Tarzan, though the Brice-Barker entries offer the most intriguing character relationship within the series.

The film falls in line with other Winnetou movies in various ways, some peculiarly German. The most obvious of these is the ever-present English twit, in this case a former lancer named Robert Eugene Robin-Ravenhurst, though played by a German actor (a former Nazi even) named Viktor de Kowa. The same film company, Rialto, was also producing a very popular series of mystery thrillers adapted from stories by Edgar Wallace. Pompous, stuffy, self-important, or merely wildly eccentric Englishmen similarly and invariably populated those films, though with a few exceptions (such as Christopher Lee) they were almost always played by Germans. German moviegoers apparently found such English stereotypes hilarious, with the marvelous character comedian Eddi Arent specializing in such roles, co-starring in most of the Edgar Wallace movies and several of the Winnetou films in which he played similar parts.

In about half of the films, actor Ralf Wolter played Sam Hawkens, a typical Western sidekick but with a twist: he wears a horrifically bad hairpiece to hide a missing scalp, lost years before to hostile Indians. Wolter does not appear in Thunder at the Border, with Yugoslavian actor Vladimir Medar (the priest in Fiddler on the Roof) instead playing the sidekick here.

The Winnetou films proved so popular they enjoyed budgets considerably higher than all but the most expensive Spaghettis. The rich cinematography and orchestrations, vast numbers of costumed extras, elaborate sets, etc. all point to this, and compatible to $3-4 million Hollywood Westerns of the period. (Todd Armstrong, Jason of Jason and the Argonauts, appears to have been under a long-term contract with Columbia Pictures at this time so it's possible, even likely, Columbia either helped finance the picture or pre-agreed to a negative pick-up deal. Oddly, Armstrong sounds like somebody else dubbed him.)

The film has several memorable, big-scale scenes. A particularly eerie, apparently original idea has Silers's men murdering an entire wagon train of Mexicans trying to flee Mira Monte. Sending a message, all the bodies are strapped back aboard their wagons, which are then tied together and turned back toward the town. As the corpse-filled wagon train slowly rolls in, a silent shock falls over the community, with most dropping to their knees and crossing themselves.

The fire scenes are quite spectacular and look rather dangerous. Vladimir Medar, not a stunt double, jumps on one man on fire, trying to extinguish the flames. Moments later Pierre Brice does something similar, and his costume catches on fire in the process.

Filmed in 2.35:1 Ultrascope with U.S. theatrical prints by Technicolor, Thunder at the Border gets a solid 16:9 enhanced widescreen transfer. The image, with Columbia-generated title elements, is reasonably sharp and bright, with good color. The mono audio, English-only with no accompanying English or other subtitles, is also fine. No Extra Features.

Those unfamiliar with the Winnetou phenomenon would do better to import the German Blu-rays with English subtitles/dubbing, but for the initiated Thunder at the Border is most welcome, even if it is a lesser entry in that long-running, beloved German film series. Recommended.

* The IMDb erroneously gives her character name as "Michèle Mercier," the same name as contemporaneous sex symbol then starring in the "Angélique" films, surely an error.