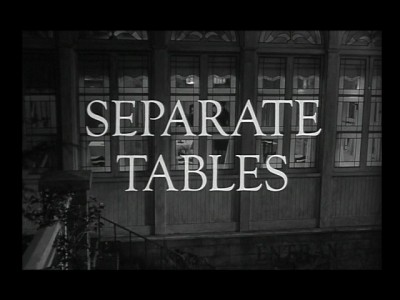 I wasn't actually familiar with the meaning of "separate tables" before watching this movie. As it turns out, it refers to a perk of a live-in hotel, where the dining room boasts individual tables where guests can eat on their own rather than the big group tables that they might be forced to share at other resorts or boarding houses. It is at once a symbol of independence and isolation. In Delbert Mann's adaptation of Terence Rattigan's play, the space between can mean everything. It can be as wide as a canyon or just a small step, a simple "good morning" away.

Released in 1958, Separate Tables features a phenomenal ensemble cast. Though David Niven won an Oscar for Actor in a Leading Role (and Wendy Hiller for Supporting Actress), one would be hard pressed to single out any one star here. In reality, the original play was split in two itself, and the stories of Major Pollack (Niven) and the drunken writer John Malcolm (Burt Lancaster) was presented as two distinct but conjoined one acts, often with the same actors in both roles.

In this case, Rattigan and co-screenwriter John Gay have intertwined the tales, crafting the Beauregard Hotel as a place where everyone is all up in each other's business. The tables may be separate, but the gossip is shared. The Major is a longtime resident who presents himself as a stoic war hero while harboring strange peccadilloes. He has a good friendship and possible romantic flirtation with the timid Sybil (Deborah Kerr), who is at the hotel with her overbearing mother (Glady Cooper). It's the busybody older lady who causes trouble for the Major when she discovers he has been convicted for lewd conduct on a train. The soldier's image crumbles under the scrutiny.

The only one to fully stand-up for the Major is John, who has had his own fair share of troubles, including jail time related to a domestic violence charge. His past comes back to haunt him in the form of his ex-wife, Ann (Rita Hayworth). Her motives for showing up out of the blue are suspect, but her presence immediately causes havoc in John's life. He has been hiding away at the seaside lodge where he is in a loving affair with the the woman who runs the place (Hiller). It's almost as if Ann can sense that things are going John's way and is there to purposely knock him off course--though, even she is more complicated than that, more than a mere siren or femme fatale. There are hints that she maybe is addicted to sleeping pills, and as the story wears on, her own loneliness becomes evident.

Action and subplots nicely flow together. Mann shows a deft control of the elements, and the film runs cleanly despite some tinkering by Lancaster and the studio in the final cut. Though we never go far from the Beauregard, there is some nice differentiation between the interior and exterior setting. Mann uses shots from the outside looking in to remind us of the loneliness and the solitude that such displaced people suffer. They are as separate from society at large as they are from each other. Charles Lang (Wait Until Dark) photographs Separate Table stylishly, using the changing weather and the different times of day to evoke the required moods.

Niven and Lancaster duke it out for supremacy in terms of who the real star is. Both have excellent screen presence, though their characters have completely different demeanors. John can be boorish whereas the Major goes from overly mannered to despondent. His admission of his past failings to Kerr's Sibyl is heartbreaking. Kerr is also quite excellent as the neurotic spinster. Only Hayworth seems underused here. Her iconic image does more to give Ann the kind of seductive allure that would drive a man like John crazy than anything in the script. The part seems underwritten.

Unsurprisingly, the various narrative strands pull apart and then come together again, weaving a tale where people are compelled to make a choice, either to do the right thing or carry on in the wrong. Separate Tables has an excellent finale where all these things are tied up nicely but without it being too clean or cloying. 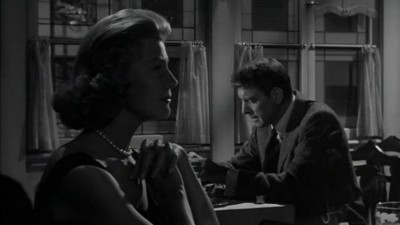 Video:
Kino is releasing Separate Tables on Blu-ray as a high-definition transfer shown in a widescreen 1.66:1 aspect ratio. Outside of a few scenes where resolution gets soft, the overall image is very good, with only minor crackles or marks, hardly noticeable and not at all distracting. Overall clarity is excellent with strong detail and a good balance between light and dark. Shadows look good.

Sound:
The original soundtrack is mixed in mono and is very good. No hiss or pops or distortion are evident, and tones are sharp throughout.

Extras:
Bonus features include the theatrical trailer and an older commentary with Delbert Mann, who passed away in 2007.

FINAL THOUGHTS:
Highly Recommended. Delbert Mann's cinematic adaptation of Terence Rattigan's Separate Tables is a terrific drama that grapples with some heavy issues with a delicate touch and sensitive insight. An all-star cast, including Oscar-winners David Niven and Deborah Kerr, as well as a forceful performance by Burt Lancaster, brings the varying population of a British hotel to life. Interpersonal scandals arise over the course of a couple of days, disrupting the placid life of all the residents, building to a powerful conclusion. 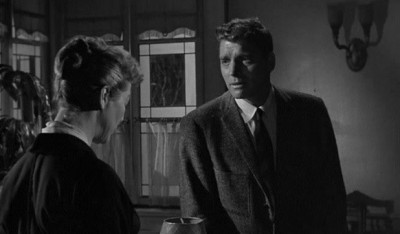