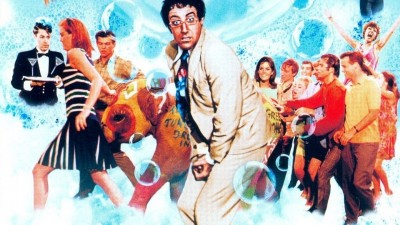 Peter Sellers reteams with his Pink Panther co-conspirator Blake Edwards to cut loose and indulge their love of silent film comedies. The concept for The Party is something Chaplin or Keaton could have done wonders with, and though the movie does have quite a few verbal jokes, the majority of the more elaborate gags could run without sound and still inspire a huge round of guffaws.

Sellers plays Hrundi V. Bakshi, a recent transplant from India to Hollywood trying to make his way as an actor. After a particularly disastrous day on the set, where Bakshi's clumsiness brings the production crashing down, a mix-up causes him to be invited to the studio head's glitzy soiree rather than be fired. From there, comedy ensues, as the good-natured Bakshi just tries to fit in. He loses his shoe, runs afoul of parrots and dogs, tries to communicate with starlets, and even learns to play pool from a cowboy actor (Denny Miller), who is the only person in the movie that has an accent more extreme than Sellers.

The Party is a fantastic showcase for Peter Sellers' true talents. Not only does he completely lose himself in the role, but his physical agility as he traverses the many architectural oddities in the thoroughly modern home (inspired, perhaps, by Tati's Mon Oncle?) lets the actor show just how marvelous of a comedic athlete he is. The Party is one of those films I can watch a million times, and it never fails to make me laugh. I can even put it on while doing other things and check back in and out as the task demands, and every time I check in, I know it will make me smile. It's no hyperbole to call it a masterpiece.

I think a big reason for that is it's all just so good-natured. While there is definitely a sense of making fun, the only people really being made fun of are the stuck-up fatcats whose old-world mentality and opulence are becoming passé. Note the exchange that Bakshi has with the impossibly tall daughter of the hosts (Kathe Green) about the painted elephant, and how quick she is not to offend. It's 1968, and Edwards and Sellers are definitely "with it," seeing a more colorblind world on their horizon (those incorruptible optimists!) and adjusting accordingly. Though a Brit playing Indian would be a little harder to pull off today, Sellers' caricature is less about racial stereotyping and more about capturing the genuine anxiety of a well-meaning outsider. The scenes where he wanders the room alone, on the outskirts of the crowd, have a surprising pathos, identifiable by anyone who has ever ended up at a shindig where they don't know anybody. I would guess that's why they chose Claudine Longet to play the love interest. She is also an immigrant, though one assumes she would have an easier time since she's a cute French girl (read: pretty and white). Still, theirs is a sweet courtship. Plus, we get the singer's performance of the super sugary Henry Mancini-penned pop song "Nothing to Lose." (Not to mention the awesomely cool-daddio title number.)

I should note, though The Party is very funny, it's not a gutbuster. The largely improvised comedy is of a kind that is observed and absorbed more than it is convulsively reacted to. As noted, it's more Chaplin and Tati than it is Jerry Lewis. Its slapstick is designed around character and as a send-up of the unnecessary conceits of the modern age rather than just silliness for the sake of being silly, and one could argue that The Party has likely aged better than most just for that reason.

Video:
The Party comes to Blu-ray as a widescreen 2.35:1 transfer encoded in 1080p. While the new digital presentation didn't completely bowl me over, it is a marked improvement over the low-priced DVDs that have been available over the years (the last time I saw it, for instance). The image has vibrant hues and strong detail, which is good for a movie with so much to look at. Resolution can occasionally be soft, and brighter scenes like the opening shots in the desert can be a little warm (no pun intended), but overall, the transfer is clean and isn't overtaken by grain or unnecessary clean-up.

Sound:
The DTS mix of the English soundtrack is very good, with sharp clarity and excellent tones. Music sounds smashing, and the dialogue is always easy to hear, even when low in the mix. No extraneous noise or dropouts were apparent.

Extras:
Unless I've missed a beat somewhere, this is the first North American disc of The Party to feature any extras at all. Kino has imported some extras from a UK release. There are two in-depth promo featurettes, "Inside the Party" (24 minutes) and "The Party Revolution" (16 minutes, 30 seconds). There are also short profiles of director Blake Edwards, associate producer Ken Wales, and executive producer Walter Mirsch.

Finally, the original trailer is included.

FINAL THOUGHTS:
The Party is a marvelous showcase for Peter Sellers, a chameleonic comedian known for getting lost in his characters. Here he plays a good-natured but terribly clumsy Indian actor out of place at a late-'60s Hollywood bash. Built around a short outline by director Blake Edwards, The Party sets the actor loose to do what he does best: create elaborate situational slapstick. The results are often hilarious, occasionally surprising, and even a little sweet. Highly Recommended.