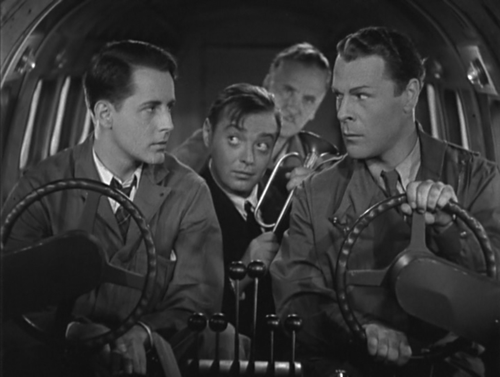 Crack-Up is a low-budget B-movie from the '30s that overcomes a less-than-airtight script thanks largely to a typically great performance by Peter Lorre as the villain and, to a lesser extent, a decent turn by Brian Donlevy (Kiss of Death, the Quatermass films) as the anti-hero.

Some top-secret U.S. government blueprints are veritable must-haves for a number of a competing foreign spies, representing a handful of never-named European countries. Foremost among them is an Eastern European played by Lorre and referred to only as "The Chief." He runs a network of intelligence agents out of a refashioned basement apartment in a tenement building. His cover identity is "Colonel Gimpy," a supposedly touched-in-the-head fellow who likes to hang around the airport where a new plane capable of intercontinental flight is being built. The implausible backstory has it that the military personnel and airplane mechanics were not suspicious of this foreign-accented fellow with a fake limp, and allowed him to hang around and become their mascot. I would almost buy it if it wasn't plain as day that Lorre's character is faking his "simpleness." I feel like Colonel Gimpy would have gotten a C- in secret identities at Spy School -- except in the reality of Crack-Up, it somehow works for him.

Through his network, Lorre's chief hires hot-shot flyboy Ace Martin (Donlevy) to steal the government blueprints for him. In the early going, Ace is seen stealing an ice cream sundae from his straight-arrow mechanic Joe (Thomas Beck) while flirting with Joe's girlfriend. In other words, this guy isn't one for conventional morality. Ace further demonstrates his shamelessness by feeding Joe a line that the blueprints he wants to steal were taken from him and he just needs them back. So, being a good guy, Joe steals them for Ace.

Charles Kenyon and Sam Mintz's script piles on subplots, including some requisite spy double-crosses, but it does little to distract from the simplicity of the story. We're basically revving up for the final section of the film where Ace, Joe, and The Chief are all up in the air in that plane together, along with the plane's designer John Fleming (Ralph Morgan). Ace has the stolen blueprints, and we're not sure if he's going to land the plane in The Chief's country, if he has sold out to another bidder in another country, or if Joe will be able to convince Ace to give up and return the papers to their rightful owners.

The scenes in the plane are not particularly tense -- a wing-walking scene where Joe impetuously attempts to fling Ace off the plane notwithstanding -- but they benefit greatly from the quietly antagonistic rapport between Lorre and Donlevy. Lorre particularly invests every line with a wicked blend of humor and menace. Donlevy's characterization of the mercenary Ace, meanwhile, is fascinating largely because he acts like he's the hero of this story and clearly does not believe anything he is doing could be construed as wrong. These unusual performances help distinguish Crack-Up and make it worth a look, especially for Peter Lorre fans. 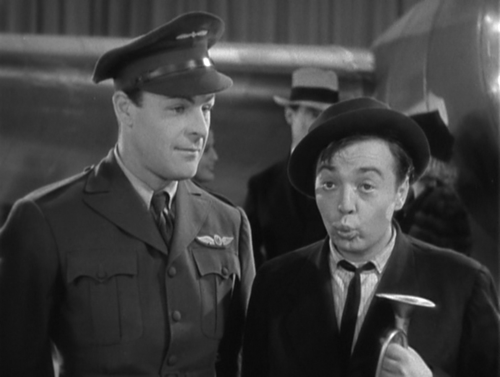 The DVD
Crack-Up comes on a manufactured-on-demand DVD-R. No frills, no bonuses, and the chapter breaks come at 10-minute intervals, regardless of the story.

The Video:
This looks like an old TV master. The standard 1.37:1 presentation features frequent dirt and speckles, but those flaws don't completely derail the experience. While certain shots look a little washed-out, mostly the black levels and contrast are fairly strong. The clarity is mediocre, being neither crystal clear nor distractingly soft.

The Audio:
The mono audio is similarly mediocre in that it's not too badly beaten up, but it's not really impressive either. It gets the job done, so I've got no major complaints.

Final Thoughts:
A lot of Crack-Up doesn't make a lick of real-world sense, but in its own crazy way, the film is quite entertaining. Recommended. 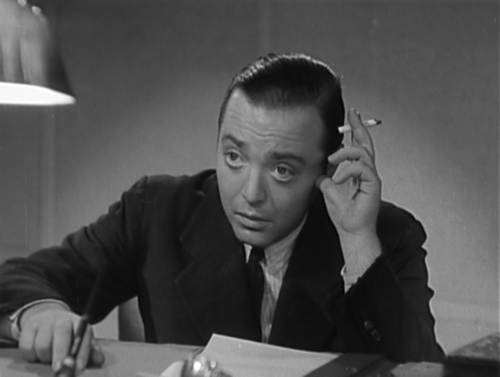