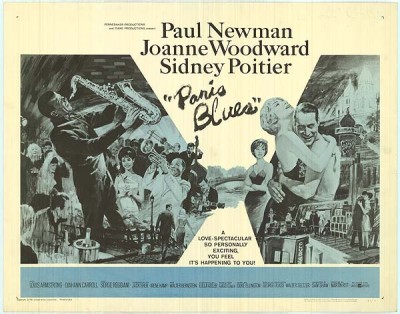 Martin Ritt's 1961 jazz-infused drama Paris Blues is one of those films that, once you've seen it, you're kind of shocked that people don't talk about it more. A joint vehicle for Sidney Poitier and Paul Newman, Paris Blues is a Kazan-like social narrative that juxtaposes new Hollywood method with old Hollywood romanticism and somehow let's both win without compromising either.

Newman stars as Ram Bowen, a trumpet player with a moody demeanor worthy of his groaning pun of a name (say it out loud and then say, "Rimbaud"). He is the toast of Paris' side-street jazz scene, blowing nightly with his band, working alongside his cohort and musical arranger, Eddie Cook (Poitier). Eddie is practical and level-headed, a smooth balance to Ram's jagged edges. The ex-pat Americans have a good thing going in France. Ram even has a no-strings love affair with a chanteuse (Barbara Laage) who doesn't mind feeding him after gigs.

Yet, the boys have ambition, too. Ram is working on a magnum opus, his "Paris Blues," and he hopes to get some weight behind it by giving the sheet music to Wild Man Moore, a trumpeting legend who has just landed in the city as part of a European tour. Moore is played by none other than Louis Armstrong, just to give you an idea of Paris Blues' musical bonafides. The original music was also composed by Duke Ellington, who was nominated for an Oscar. Ritt isn't fooling around.

Yet, he's also not limiting his story--which was written by four different scribes from a novel by Harold Flender--to just difficult men in smoky bars. When Ram goes to the train station to meet Moore, he also meets a pair of young American women in town to see the sights. One white (Lillian, played by Joanne Woodward) and one black (Connie, as portrayed by Diahann Carroll). To give you an idea of how progressive Paris Blues was for the time, despite the eventual romantic pairing being just as you suspect, Ram at first flirts with Connie without race even being mentioned. (And who wouldn't. Have you ever seen Diahann Carroll?!) Lillian is more his match, however, in that she's been around the block and has an admirable patience. The single mother has dealt with her fair share of troublemakers, Ram's temperament suits her. It's going to take some effort to get him to value anyone over his music, though. 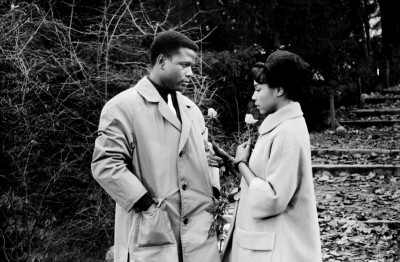 Which he sort of will come to do over the time he and Lillian spend together in Paris. For the next several days, both pairs of lovers will try to fashion their affections into some kind of common ground. Lillian sees the possibility of something more with Ram. Connie would love for Eddie to come back to the States, but he's frank about his reasons for living overseas: America is racist. She argues it's gotten better in the five years since he left; he counters that it's still not good enough.

Paris Blues is very frank about its politics, but not in a way that makes it seem like a polemic just for the sake of it. The topics broached in the narrative emerge naturally. These are things the characters would care about, they deal with life as it would genuinely affect them. For as traditionally structured as much of the writing is, Paris Blues treats all aspects of these folks' existence in the same realistic manner. It's never said, but we know that Ram and Lillian are having sex. Ram's guitar player (French cinema legend Serge Reggiani, Casque d'Or) is also a drug addict, a fact Ram confronts head on (as befitting a ram, natch). Race, sex, drugs, art--this is important stuff. Ritt manages to make all these things come off as both matter of fact and yet also important. Hell, look closely at the opening montage, you'll see a gay couple tucked away in Ram and Eddie's audience.

But forget all that. The sights! Paris Blues was actually shot on the Seine! And the music! Louis Armstrong struts into Ram's club to challenge him to the jazz equivalent of a rap battle. The only comparable jazz-scene movie of the period is Basil Dearden's All Night Long, released a year after Paris Blues. This flick is the real deal.

You also get an acting quartet that was at the height of their considerable powers. Apparently at one point this was going to be a movie for Marlon Brando and Marilyn Monroe. As wonderful as that is to imagine, you can't beat the chemistry of longtime paramours Newman and Woodward. They are the exception to the accepted rule that real lovers don't work on screen. Poitier and Carroll are wonderful, too--though much less showy. They are the practical couple, the counterpoint to the crazy Caucasians!

Final word: Paris Blues is a damn entertaining drama. It's romantic and toe-tapping and thought provoking. It deserves to sit next to Ritt and Newman's more famous collaborations, like Hud and The Long, Hot Summer. It's just that good. 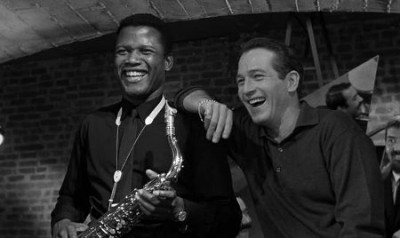 Video:
The high-definition widescreen transfer (1.66:1 aspect ratio) is quite nice, with sharp resolution and excellent balance to the black-and-white photography. Certain shots sometimes appear a little soft, but overall, the look of Paris Blues is crisp and free of blemish.

Sound:
The original soundtrack is remixed in mono and comes through clean and clear. There are no dropouts or distortion. The music sounds fantastic.

FINAL THOUGHTS:
The 1961 musical drama Paris Blues is an exceptional example of the changing times, parsing politics, romance, and artistic ambition against the backdrop of the French jazz scene. Paul Newman and Sidney Poitier star as musicians who have left America in search of success and find themselves being drawn back home when two women (Joanne Woodward and Diahann Carroll) come over from the States and in search of vacation love affairs. Featuring music by Duke Ellington and showcasing Louis Armstrong and his incredible trumpet playing, Paris Blues paints a compelling picture of the struggles and concerns of its subjects without letting the weighty topics overtake the story. Highly Recommended. 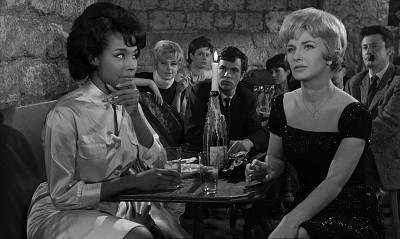