"At some point it's just about doing the right thing for somebody." 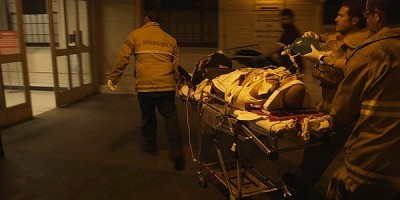 Throughout the debate over healthcare, one thing has remained consistent: regardless of where politics fall, our nation's emergency rooms pick up the slack and make sure that the worst off and the most crucial get taken care of.

Ryan McGarry's debut documentary feature Code Black sets out to look at what that really means by capturing a detailed snapshot of a very real ER. His focus is the emergency center in Los Angeles County, one of the busiest in the nation. It's also one of the innovators in terms of establishing the idea of emergency care. An interesting aspect of Code Black is that, in the middle of filming, the state shut down the original hospital facility due to more stringent safety regulations. The dedicated workers, most of whom are very young and in the earliest stages of their medical careers, have to adjust to a new environment and added paperwork. Surprisingly, the chaos of the old facilities, where patients were practically stacked up on one another, is somehow preferable to the more modern set-up where each patient gets his or her own room, even if only because the ideal ER set-up encourages team work over individual effort.

In terms of establishing a narrative, McGarry sees his story as a two-pronged deal: personalities and procedure. One leads to the other, and the filmmaker spends a lot of time interviewing the young doctors he shadows, finding out what motivates them not just at the time of filming, but also the things that initially pushed them toward this type of medicine. While the specifics vary, the one consistent thing is that most of the participants had some kind of encounter with emergency personnel that later made them want to pass the good fortune along.

The title Code Black refers to an "all hands on deck" scenario, where conditions with a particular patient are so dire, they demand the entire staff get involved. At the LA Country ER, it also comes to refer to the days they are so understaffed, getting through their rather considerable patient load will require everyone on the clock to stay active and focused. Some of the footage McGarry captures is not for the faint-of-heart. The camera never lingers on a dead body or a wound for too long, but trust me, it's enough.

It's also necessary to understanding what a vital service these docs provide. Code Black isn't afraid to engage with the potential consequences of an ER visit gone bad or the doctors' very real awareness of the thin veil between life and death. It only adds to the nobility of their task that they all have to face the facts that not every patient they see will make it. The gravity of this clearly weighs on them all, though, particularly as they ponder how red tape has been known to bar them from taking extraordinary measures where required.

If there's one complaint I have about Code Black is that for as much as McGarry wants to put us in the thick of it, the editing of his film is rather calm and ordered. It's clear that chaos often rules the day, and we never get a sense of just how challenging that disorder can be or how serious the potential errors might be. That aside, however, the movie will make you think that most ER docs are something close to superhuman, both in action and in spirit. 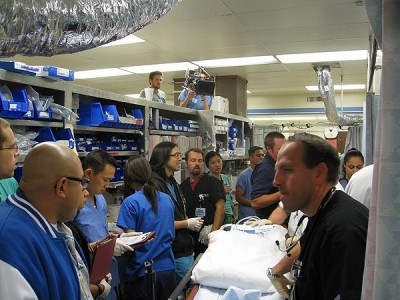