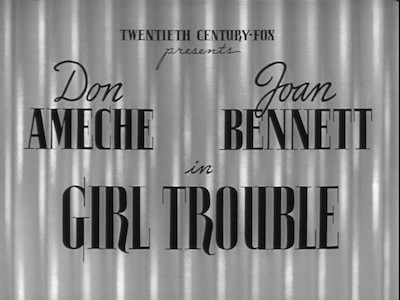 Has anybody ever suggested a Joan Bennett biopic to Debra Messing? At times, the resemblance is uncanny. And the choice of the classic comedian's material not too far from what the Will & Grace star might choose for herself.

Take 1942's Girl Trouble as a for instance. Bennett stars as June, a socialite who wakes up one morning to be told that she has lost all of her fortune. Her late father had his funds tied up overseas, and the war has cut off all access to it. Looking to buy time, June decides to sublet her New York apartment. Her potential tenant? A handsome Venezuelan playboy with the odd name of Pedro Sullivan. Played by Don Ameche, Pedro is a smooth operator looking to redeem himself for his wanton youth. He's been sent to America to secure a loan and save his family's rubber business. Given that goods like rubber were in short supply for the U.S. during the time, this would be mutually beneficial.

The situation goes pear-shaped almost immediately. When Pedro shows up, June is wearing the uniform of the maid she had to let go and is trying to clean the place on her own. Rather than own up and risk embarrassing herself, June lets her conniving best friend (Helene Reynolds) act as her rental agent. The deal is sealed, but Pedro insists that the owner's servant stick around. Thus, June becomes the maid of her own house. As Pedro strives to secure the needed funds, June must keep up the ruse. Hijinks ensue, and love blossoms, but what will happen when Pedro finds out the truth?

Girl Trouble was made from a script by Ladislas Fodor (The Other Love) and Robert Riley Crutcher (Key to the City), and directed by Harold Schuster (My Friend Flicka). The dialogue is quite witty, including some clever quips and ribald double entendres. June isn't fooled by Pedro's confident manner, and there is much speculation about their relationship behind closed doors even before they start pitching woo for real. Bennett is quite funny, capable of turning on the charm but also excellent at the slow burn. Her evil eye could blaze a hole in the screen. Ameche is also very good. He pulls off being the slick ladies man without making it seem creepy.

It's just a little too bad that Schuster isn't as capable of racheting up the screwball elements of the plot with the same vigor that his cast manages with the one-liners and zingers. As wacky as Girl Trouble's story sounds, it rarely gets as wacky as it should be on screen. There are a few good set-ups, like when Pedro and June get in a brawl at a dancehall, but the real comedy appears in the cut between the scenes. We don't actually get to witness the real fight. Excellent performances from Billie Burke as a pushy charity worker and Frank Craven as, well, a craven industrialist, up the zany quotient, but there's only so much they can do.

Even so, Girl Trouble kept me giggling and the romantic entanglements are believable. Bennett and Ameche have good chemistry onscreen, and the social and class-based comedy still feels fresh. It's a script that's ripe for updating. You hear me, Debra Messing? If not a biopic, then just start cherry-picking Joan Bennett's catalogue. Beginning right here. 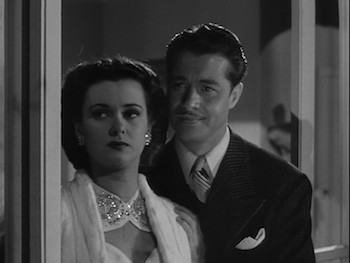 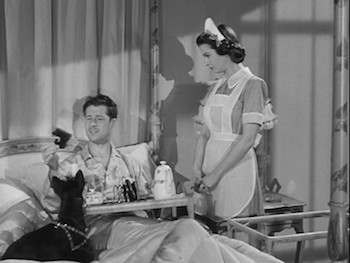 Video/Sound:
This Fox Cinema Archive title is another manufacture-on-demand release from the studio's extensive backlog. The 1.37:1 black-and-white transfer on Girl Trouble is passable. The image is clear, though the actual photography appears faded. Marks on the print are also evident.

The original soundtrack is mixed for mono and at times has some extraneous crackles and static, but is mostly fine.

FINAL THOUGHTS:
Recommended. This 1942 romantic comedy makes a nice vehicle for stars Joan Bennett and Don Ameche, even if Girl Trouble doesn't take full advantage of its own screwball concept. Bennett plays a pretty society girl whose financial woes force her to lease out her apartment. Misunderstandings lead to her pretending to be her own maid; love and other complications quickly follow. The dialogue is sharp and brings more chuckles than the action. Girl Trouble is perfectly enjoyable, if possibly forgettable. 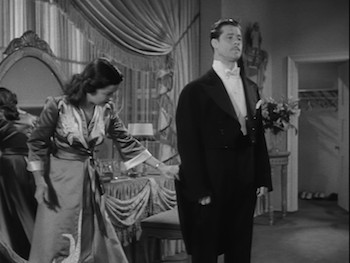 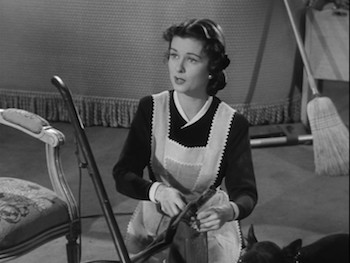