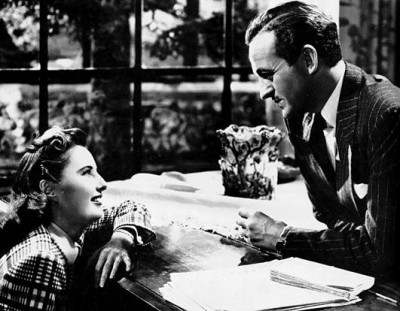 Case in point, 1947's The Other Love, a slight melodrama directed by Andre De Toth (Ramrod, Crime Wave) from a story by Erich Maria Remarque (All Quiet on the Western Front). In The Other Love, Stanwyck stars as Karen Duncan, a world-famous pianist whose international tour is cut short when she comes down with tuberculosis. Waylaid by the illness, Karen goes to a sanatorium in the Swiss mountains to recuperate. There she is put under the care of Dr. Anthony Stanton (David Niven, Separate Tables), whose bedside manner involves him being dashing and making his female patients feel like they are on vacation rather than sick. This method backfires when he and Karen develop affection for one another. He hides the severity of her condition from her, which leads her to not take his advice as seriously as she should.

Rather than rest, Karen takes trips to the nearby town. On one excursion, she causes a racecar driver to crash into a tree by rushing her horse-drawn carriage into an intersection. Karen gives Paul (Richard Conte, Thieves' Highway) a ride by way of apology, and they hit it off. She sees him as a means to escape, to get away from the sanatorium and live her life for the moment rather than hide away. TB be damned!

As I said, Barbara Stanwyck is excellent as Karen. It's a role tailor-made to allow her to show her chops. She gets to be sensitive, soulful, defiant, romantic, and weak. The Other Love is an unabashed tearjerker. De Toth wants to make you cry.

The problem is, The Other Love lacks a foundation. Karen gets only the thinnest of backstories, and her lovers get none at all. They are types, they aren't people. The doctor is the square, the racer an outlaw, and they don't exist outside of Karen's sphere of activity. Away from her, they cease to be, and around her, they only serve the purposes of her story. Both Niven and Conte seem like they are on autopilot, locked into their function and giving little more. This means there is no spark in the love affairs, and thus no visible reason to fall in love. The orchestra can hit those strings as hard and loud as they like, but I'm not buying it.

The same problem sucks all the gravity out of the film's dark climax. For a movie that is all about illness and death, there seems to be little consequence to both. There are neither highs nor lows, just a straight line, meaning that no matter how excellent the lead actress, The Other Love remains woefully average. Or perhaps more accurately, because of her. Replace Barbara Stanwyck with a lesser contemporary, like Jennifer Jones, and there would be nothing to recommend The Other Love at all. 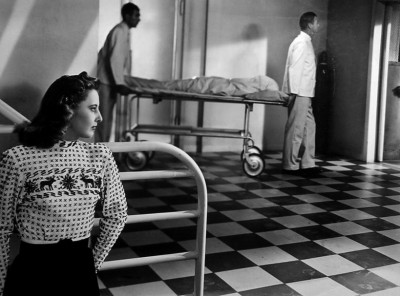 Video:
Olive's 1.37:1 transfer is of decent, if inconsistent, quality. The Other Love was shot in black-and-white by Victor Milner (The Furies, Unfaithfully Yours), and while his compositions are nice, there is not a lot of contrast here. It's mostly all lit for a kind of early-evening atmosphere, and the print used only emphasizes the lack of variety. The image is mostly clear, with some blurring around the edge of the frame, as well as the occasional haziness or surface noise.

Sound:
The original audio soundtrack has been remastered in mono and sounds pretty good. No distortion, dropouts, or extraneous noise was evident.

FINAL THOUGHTS:
One for the Barbara Stanwyck completists. The legendary actress stars in The Other Love as a piano player who, while on rest from tuberculosis, is caught in a romantic triangle between the doctor that promises to cure her and the racecar driver that will give her a swift ride out of there. It's as passionless as it is contrived, wasting a solid lead performance on a mediocre script. Rent It.