Olive Films // Unrated // October 14, 2014
List Price: $34.95 [Buy now and save at Amazon]
Review by Stuart Galbraith IV | posted November 3, 2014 | E-mail the Author
Well this is a treat! As a movie, Dragonfly Squadron (1954) is fairly ordinary, a war movie with a familiar story and genre stereotypes: hardline, humorless commanding officer; sly second-in-command subordinate with a personal grudge against his commanding officer; a woman emotionally torn between the dedicated, self-sacrificing doctor she married and the commanding officer she loves, etc.

Olive Films' release of this 3-D Film Archive restoration is, on the other hand, one of significant historical importance. Dragonfly Squadron was photographed but never released in 3-D. By the time it opened in March 1954, the new widescreen and stereophonic sound format pushed by 20th Century-Fox, CinemaScope, had won the technological dissemination battle. The original 3-D negative film elements managed to survive, but a 3-D Blu-ray release of a movie as obscure as Dragonfly Squadron, produced not by one of the major Hollywood studios but rather by Monogram/Allied Artists, a Poverty Row company, was practically nonexistent until Bob Furmanek and Greg Kintz of the 3-D Film Archive came along and pushed for its stereoscopic restoration.

For fans and admirers of older 3-D movies, Furmanek and Kintz are providing an invaluable service, preserving, restoring, and making available 3-D features and shorts that might very well be lost forever. Classic 3-D movies are rarely theatrically revived, and when they are almost invariably what gets shown is either House of Wax (1953) or Alfred Hitchcock's Dial M for Murder (1954), with a few scattered other titles (Creature from the Black Lagoon, for instance) exhibited less frequently. I'm reminded of a press conference Jackie Gleason gave announcing the redistribution of "Lost" Honeymooners episodes. Asked why he chose to make them available, Gleason slyly replied, "I'm sick of watching those other Honeymooners," referring to the "Classic 39," rerun ad infinitum. The same holds true for classic 3-D, turning even a movie as otherwise minor as Dragonfly Squadron into a most welcome viewing experience. 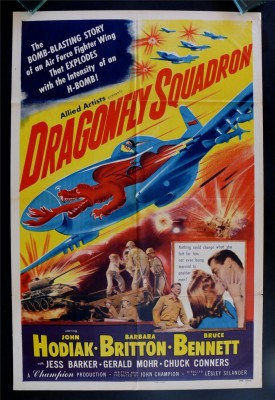 Though set just before and during the outbreak of the Korean War in May 1950, Dragonfly Squadron's story harkens back to war movies like Flying Tigers, They Were Expendable, and Back to Bataan, with maybe a dash of Go for Broke! (1951). John Hodiak stars as Maj. Mathew "Matt" Brady*, a celebrated but grounded-for-medical-reasons Air Force instructor tasked with training green American and South Korean pilots at Kongku Air Base, with little more than three weeks to whip them into shape. (Among the young pilots is James Hong, uncredited.)

Matt discovers that his ex-fiancée, Donna Cottrell (Barbara Britton) is also stationed there. They planned to marry until she learned that her supposedly dead doctor-husband, Stephen (Bruce Bennett), a prisoner tortured in Indo-China was, in fact, alive. He loves her and as he's a saintly, dedicated physician (despite mutilated hands) she remains devoted to him, regardless of her feelings for Brady.

More familiar plot points emerge: Capt. Veddors (Harry Lauter) resents Brady, blaming him for the death of their mutual best friend in a plane crash. Other genre stereotypes are introduced: Capt. Woody Taylor (John Lupton) and Anne (Pamela Duncan) are a young married couple anxious to return to the States after being stationed in Korea for two years without a break. Matt's best friend is Capt. MacIntyre (Gerald Mohr), whose genial wisecracks contrast by-the-book Brady's stiffness. Also in the squadron are the requisite southern hick (Fess Parker), an elfish flyer (Eddie Firestone, uncredited) always hiding a mutt under his leather jacket, and a soft-spoken, efficient junior officer (Adam Williams) who all but has "Doomed" painted across his helmet.

Dragonfly Squadron's plot may be familiar, but its execution, under the sure hand of efficient B-movie director Lesley Selander, is nonetheless involving and well-paced for a picture of this type and budget. Reportedly the film's budget was around $300,000, dirt-cheap by major studio standards but a bit costlier than the usual Monogram/Allied Artists title from this period. Air Force and Marine Corps hardware helped make the film look a bit more expensive than it actually was, but Selander's good direction adds to the film's modest polish.

The film makes use of stock shots, some in regular 2-D, and there are few opticals. A battle and evacuation near the end of the picture offer the best 3-D effects, with everything done full-scale with on-set special effects. Much of this material looks great.

It also helps that good actors, many of whom regularly offered steady support in cheaper pictures like these, populate the film. John Hodiak was a bona fide star, albeit a fading one. He was one of dozens of leading men who established themselves during the early ‘40s, when many established stars had abandoned Hollywood temporarily to fight the war, only to find himself struggling once they returned.

There are a few up-and-comers in the cast, notably Fess Parker and, much later in the story, Chuck Connors, both oozing charisma and obviously on the ascent. Decent actors who toiled away in cheap films mostly, however, populate the cast: Bruce Bennett, Gerald Mohr, Adam Williams, Frank Ferguson, etc. Pretty Barbara Britton's career was, like Hodiak's, in gradual decline; she co-starred in the first 3-D feature of the 1950s, the one that launched the craze, Bwana Devil (1952).

Dragonfly Squadron lacks the kind of in-your-face 3-D effects many wrongly assume all ‘50s 3-D movies overdid, the Western Charge at Feather River being an obvious example. Despite a dearth of eye-popping effects, Selander subtly and intelligently stages many scenes to bring out multiple planes of depth. In a bar, for instance, all the chairs are stacked up on tables while on the bar itself are various half-empty glasses, to emphasize the depth of the bar more, while many of the sets have doorways leading to back rooms and whatnot. It's a far cry from the drab art direction of a typical Monogram movie. It's not a great showcase for 3-D, but what's there is well executed. Several scenes are also staged in darkened rooms, and the perception of depth is quite interesting.

Dragonfly Squadron is presented in its original 1.66:1 widescreen format. The black-and-white film has its share of speckling, but the image looks very good, and the 3-D is spot-on perfect throughout. Cheap as Dragonfly Squadron may have been, the use and ultimate look even of ordinary 3-D scenes is still more impressive than how unimaginatively most new 3-D films use the process today. (The same proved true on another cheap 3-D title now on Blu-ray, Man in the Dark.) The presentation includes the film's original intermission card. While some of the bigger 3-D movies were exhibited with stereophonic sound, Dragonfly Squadron was mono, and thus presented that way here. It's fine, on par with other mid-‘50s mono releases. It's also worth noting that the film's original 3-D title cards, heretofore presumed lost, have been reinstated.

The Blu-ray comes with a standard 2-D version of the film, along with a lively (2-D) trailer.

Dragonfly Squadron might not rank alongside the great Hollywood war movies, but its release, finally, in 3-D deserves all the accolades Bob Furmanek and Greg Kintz are receiving. Also with this title they've clearly demonstrated how desirable titles like this one can be restored and presented in flawless 3-D for a reasonable amount of money which in turn, hopefully, will prompt more 3-D Blu-ray releases.


* Sources vary about the spelling. The IMDb says "Matthew," while the TCM Movie Database claims "Mathew."