WKRP In Cincinnati: The Complete Series


In between NewsRadio and WKRP In Cincinnati, I am not quite sure how two shows I still enjoy years after their shuttering share the same general setting. Do I have some sort of subconscious fetish for AM radio that I do not know about myself? Either way, seeing the complete series of WKRP hitting shelves is a delight to see, particularly after an incomplete and inaccurate release of the show's first season some years back. 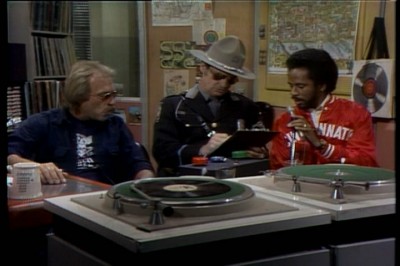 The brainchild of Hugh Wilson, who would later go on to be responsible for the Police Academy films, set at the fictitious radio station in the Ohio city finds a young program director named Andy Travis (Gary Sandy, The Insider) come to town and take the reins of the station. He deals with a burnt out morning DJ in Johnny Fever (Howard Hesseman, About Schmidt) and a more mellow yet exotically dressed evening DJ in Venus Flytrap (Tim Reid, Sister, Sister). The news director Les Nessman (Richard Sanders, Men Of Honor) is more concerned with reporting on crop reports and hog futures than the news of the day, while the advertising director Herb Tarlek (Frank Bonner) cannot sell anything. The boss of the station is Arthur Carlson (Gordon Jump, Conquest of the Planet of the Apes), who is running the business his mother bought and has no idea how to do it, while his receptionist Jennifer (Loni Anderson, A Night at the Roxbury). The show's four-season run sees the highs and lows of the rock station and those who work there.

Early on into the show, WKRP allows you to experience the ensemble's respective eccentricities and appreciate them for what they are, but in Andy's arrival, the station workers almost see a sense of hope and belief in themselves again, which was something that they had lost for God knows how long. Johnny's going through as many radio stations through the country as who would hire him showed how rough life as a disc jockey could have been. Les remains paranoid of communist attacks on the country, but his views on this and other more important topics become refined through the years. Carlson, a.k.a. "The Big Guy," is a bit of an oaf, but he has wisdom more than some would give him credit for, and evolutions on these characters and others through the seasons are impressive, to say nothing of those who portrayed them.

But perhaps the thing that made WKRP so memorable for me and others was something that did not click for me until my binge on the show. Consider that within the framework of your traditional three act sitcom it was attempting to tell stories far bolder than the storytelling allowed. In the first season and a half, the show examines perceptions of homosexuality, interracial relationships and thoughts about them, the Vietnam War, reconciling being ostracized as a kid and abortion in various episodes. And this was 1979! It mixes these dalliances adeptly and delivers the yuks within the same episode, damn near in the same scene, and it is fascinating to watch. 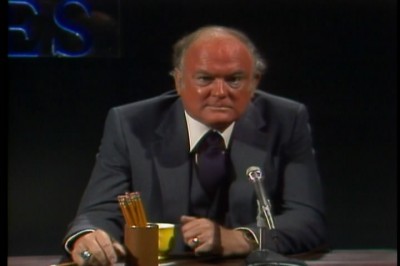 There are other episodes that are equally impressive. "Herb's Dad" is self-explanatory, but in the elder Tarlek (played by Bert Parks), we learn the younger Herb is a guy who had strained relationship with his Dad, but still tries to hold onto his connections with him how he can. Bonner's execution of it is touching in an understated manner and it is a surprisingly poignant episode. Far more so at the time was "In Concert," which was inspired by the 1979 deaths of 11 people before a concert for The Who in Cincinnati. Airing two months after the tragedy, WKRP "promoted" the concert and everyone shares their thoughts on the event. Some feel more responsible than others, but each has a moment to share their various forms of sadness or grief. It is still affecting after these years.

But when the show goes for laughs, they hit all of pitches thrown at them. "Turkeys Away" has the greatest radio promotion of our time, throwing turkeys from a helicopter, without knowing they cannot fly. It ends the storyline with a song and when you realize what it is, it is brilliance. Along the same lines, "Fish Story" shows Johnny and Venus getting drunk on air that for me remains one of the better drunk performances in memory. But perhaps in just as understated a manner is how aware the characters are on their place in life. They work for the 14th station in an 18-station market, they know this, but they support each other how they can. In the episode where Andy is scared of the station's modest jump, he realizes he is fighting the slow descent into being one of the inmates in an asylum without an active warden. The underlying charm of those who work at WKRP in Cincinnati is no small part due to that. 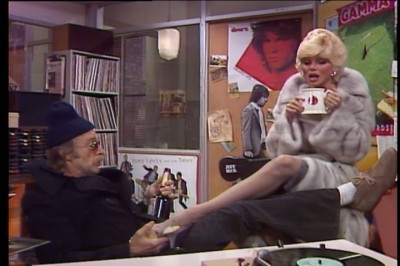 In WKRP in Cincinnati like NewsRadio, both include eclectic casts and have a fair share of laughs, though admittedly there is a tiny bit of straining in parts of Season Three. But the place of WKRP within television history is an understated one, one that deserves more attention, all the more so now that the whole show is out on shiny silver discs.


The 88-episode run of WKRP is spread over thirteen discs, with three discs for each season and a separate disc for the extras, all of which are presented in full frame video. And they look about as good as you would expect. No remastering has been done, they are basically transferred from average video copies to disc. Lots of artifacts, ghost images and image noise, no edge enhancement or image haloing, looks about as what one could expect.


What everyone has been waiting for: Shout! has managed to acquire many of the original music cues from the original broadcasts. To be fair, there are some generic cues, and the packaging does say "we have done our best to include every scene uncut and to license as much original music as possible." After going through the first two seasons, I think that the results are more than adequate. One of the more egregious instances was from "Fish Story" and The Doors are back in all their original glory. There are some acts where the music does not pick up; The Beach Boys and Jimi Hendrix (the latter being notoriously stingy on music rights) among the notable ones, and a lesser act here or there, but overall the work to acquire the initial music has been a tremendous one; kudos to Shout! for putting the work in.


If there is a downside to the Fox discs, you lose the commentaries from the first version but retain the featurettes, and all are on Disc Thirteen. There was a cast reunion held in 2014 at the Paley Center with Wilson, Anderson, Hessman, Reid, Jan Smithers (who played Bailey Quarters), and directors Jay Sandrich and Asaad Kelada. Sandy called in at some point, and the edited down version of the panel is still lengthy (44:12). They talk about how they came to the show, their thoughts on the scenes and characters' evolution through the years, and recounting the process on how the episodes would be realized. There are recollections for those who are not around or unable to attend as well. It is a nice stroll down memory road.

Next is a separate retrospective from Sandy (25:05), where he talks about some of the same things and shares his thoughts on the scenes and cast, along with how the show changed through the years. "Do My Eyes Say Yes?" (6:27) features Anderson talking about Jennifer and thoughts are recounted on both. "A Fish Story Story" (3:42) takes a look at the inadvertent reason for writing the episode and the reaction of it afterwards.


After an abysmal initial release a few years ago, WKRP in Cincinnati gets a quality release, but one that is a hell of a lot more faithful to the show than the first one. The picture looks as good as it is going to, and having most of the music here is fantastic. In a perfect world the show would have had a few more bonus materials, but I would presume they shelled out a pretty penny for the music and that is fine by me. Appointment viewing for those unfamiliar with the show, or for those who have not seen it in awhile.