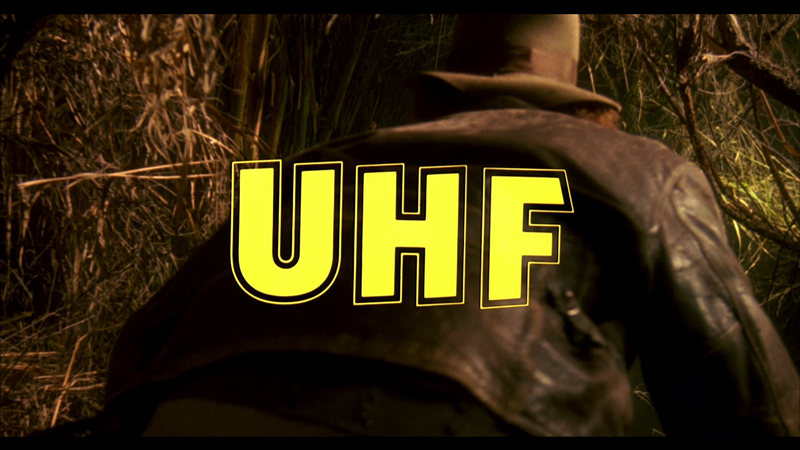 The Story So Far...
UHF was released on DVD in June of 2002, and DVDTalk has a review of that release.

The Movie
Though at first glance it makes little sense that "Weird Al" Yankovic hasn't acted in many movies over the course of his long entertainment career, a little bit of thought makes it readily understandable. After all, there's a reason why he's made so many appearances as Weird Al. It's his own personality and charm that makes him so popular, and it's hard to wedge that into other works, and makes no sense to bury it under another character. Thus, it would take the right vehicle to work for him, like the one he found in 1989, the TV-focused silliness of UHF. It's the kind of movie that you fall in love with as a kid due to the more ridiculous elements and then find it still speaks to you as you get older thanks to the overall level of fun goofiness.

It all starts with "Weird Al," who plays George (or, more or less, himself), a good-guy dreamer working dead-end jobs with his buddy Bob (David Bowe). Though he has a girlfriend named Teri (Victoria Jackson), he doesn't do right by her either. He's basically a wash-out until his uncle Harvey hands him the keys to a Channel 62, a no-budget UHF station he won in a bet. Embracing the challenge of making this nothing channel, with its staff of oddballs and sideshows, into something respectable, he gives it his all, but just faces more failure until he discovers the magic of the station's janitor, Stanley Spudowski (Fridays-era Michael Richards, who boosts ratings with his manic take on the classic local kids show. Buoyed by this success, George launches a new breed of over-the-top programming, including classically ridiculous shows like Wheel of Fish, starring his karate-teaching landlord Kuni (Gedde Watanabe), and over the top movies like the violent Ghandi II. 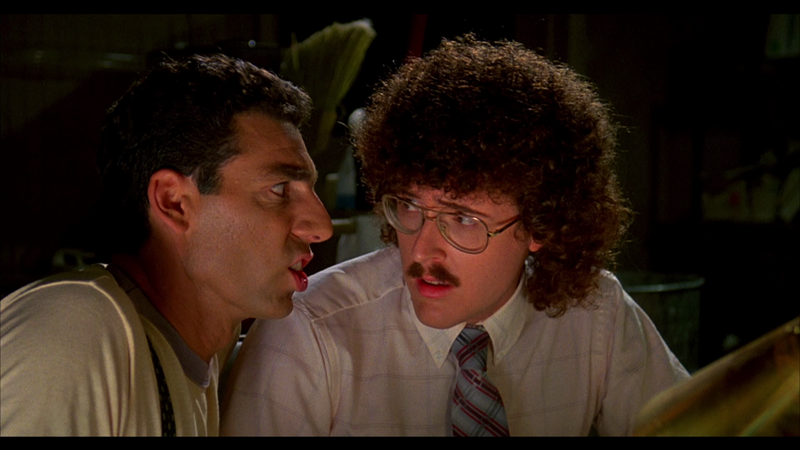 Considering this is an '80s movie, naturally the rising success of the underdog station draws the attention of the local corporate bully, VHF Channel 8, and its villainous leader R.J. Fletcher (Ted Knight-stand-in Kevin McCarthy), with his pompous son Richard (Pee-wee's Playhouse's John Paragon) ever at his side. Their evil is delightfully unhinged, giving George and his team, which includes Fran Drescher as the channel's news reporter, Billy Barty as a diminutive cameraman and soap star Anthony Geary as 62's strange technician Philo, a proper opponent in the era-classic plot device of a fund-raising drive, as George needs $75,000 to keep the station from being bought and destroyed by Fletcher and company. To the telethon!

Though there is certainly a plot that's central to the film, the movie is a sketch film, often duplicating the effect of flipping through the channels on TV. The station set-up, combined with George's daydreaming personality, was the perfect way to make this work without ending up with a disjointed mess. Thus you have peeks at insane Channel 62 shows that feature Poodles thrown out of windows and barbarian librarians, alongside full fantasy sequences that parody scenes from films like Raiders of the Lost Ark and Rambo, as well as a full Weird Al video, for his "Money for Nothing"/Beverly Hillbillies parody, shoved right in there. With so much happening at all times, it all blends together to create a sense of the absurd, right up to the ending, which delivers the feel-good climax that this movie had to end with.

Do you have to like Weird Al to enjoy UHF? Without a doubt. You'd be hard-pressed to find a film that's more entwined, on a DNA level, with its star. The thing is, if you can get past the cheesier aspects of his sense of humor, his virulent positivity makes him incredibly likeable, as proven by the reaction to his recent #1 album, Mandatory Fun, despite it going out to what could be argued to be the most jaded, cynical audience of his career. UHF is a distillation of what's powered Weird Al through decades of silly success, and it remains a good time 25 years later. 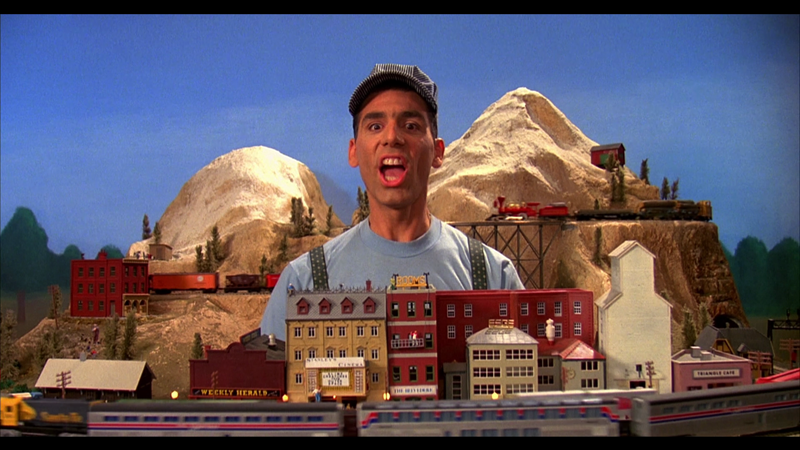 The Disc
The 25th Anniversary Edition of UHF arrives on one Blu-ray, packed into a standard Blu-ray keepcase with a two-sided cover (featuring the original poster art on the inside) and a slipcover that repeats the new cover art. The disc's animated menu offers a choice to watch the film, select scenes, adjust the set-up and check out the special features. There are no audio options, but subtitles are available in English (unlike the previous DVD, which offered French and Spanish audio tracks along with French and Spanish subtitles.)

The Quality
The 1.85:1, 1080p, AVC-encoded transfer is not the most impressive ever seen, though how much of that is an issue with the source materials isn't clear (thanks to the film's low-budget nature.) What is obvious is a near-constant jitter and the frequent appearance of dirt and damage, which is rather distracting for viewers who care about such matters. The color feels nicely-saturated and there's a good amount of fine detail, while the black levels and consistent film grain look fine (though some noise is present in darker scenes.) There doesn't seem to be any real issues with compression artifacts. There are a lot of different looks to this film, including old-style television screens, with the Spatula City commercial looking absolutely awful, full of softness and aliasing (though again, is this could be on purpose, to simulate the channel's no-budget feel.)

The LPCM 2.0 soundtrack is sufficiently strong for this film, giving the music the heft it needs and keeping the dialogue clearly understood thorough most of the film, though oddly Yankovic's voice feels a little buried during "Beverly Hillbillies." There's some separation between the two channels, with elements like George's answering-machine wailing appearing in one channel but not the other, creating some added depth to the presentation. There was no noteable distortion in the audio.

The Extras
The new extra in this 25th Anniversary Edition of UHF is a 51:06 panel from the 2014 San Diego ComicCon, which featured an interview by comic Jonah Ray, followed by a Q&A session with the audience. Though Ray geeked out over Yankovic and made a bit too much of the chat about himself, he touched on many topics including Weird Al's #1 album, UHF, and the performer's history and influence, while a ninth video from Mandatory Fun was shown but not included here (apparently for the polka medley.) The audience participation featured a number of real winners, but also included a few interesting questions, like one about Yankovic's songwriting process.

The rest of the bonus content is carried over from the previous DVD, starting the audio commentary with Yankovic and the film's director, Jay Leavey (who is also Yankovic's manager.) If Yankovic wasn't rehearsed for this, then he has some sort of super mental powers, as his encyclopedic knowledge of the production, including street addresses for locations and resumes for most of the cast, makes for an informative track, while his smart-ass sense of humor makes it very entertaining, something you realize as he starts singing over the defunct Orion production logo. Yankovicvic shares a number of stories and thoughts, including naming a number of well-known actors considered for parts and discussing how he would do the film differently now. The pair are also joined by Emo Philips and Michael Richards (separately) at points, while Victoria Jackson is dialed in by phone late in the movie. A fact-filled track with a definite fun feel.

"Behind the Scenes" is brief at just 3:39, and is an EPK-ish look at the making of the Wheel of Fish scene, including on-set footage and interviews with Richards and Jackson, while Yankovic is interviewed by Bowe. A short but entertaining piece.

There are 19:12 of deleted scenes to check out, but they aren't just a pile of scenes. Instead, Weird Al guides you through the cuts, at his self-deprecating best, semi-joking about how bad the scenes are and explaining other cuts, even fast-forwarding through most of one moment. The most interesting element is a scene cut involving a fake TV show on Channel 62, titled Those Darn Homos. It was definitely a different time.

A music video for the excellent song "UHF" checks in at 4:30, and in addition to clips from the movie, it parodies a number of big videos of the time, including Guns N Roses, Prince, George Michael, Talking Heads, Peter Gabriel, Billy Idol, Devo, INXS, Robert Palmer and ZZ Top. It's a fun bit of nostalgia, and seeing a chameleon-like Yankovic, one wonders what his career would have been like if he had dropped the comedy, along with the glasses and mustache?

The remainder of the extras are found materials, starting with 181 production stills. There's a lot of good stuff in this full-screen collection, including plenty of behind-the-scenes images showing how shots were achieved. There's also 24 photos of alternate poster ideas (showing the film's alternate international titles) along with home-video covers and promotional materials connected to the film. This kind of stuff is always interesting, especially when there's a story behind it (which you'll find on the commentary.)

Wrapping things up is a pair of trailers, the :39 teaser, designed to look like an Indiana Jones trailer, while the theatrical trailer gives a more accurate picture at 1:25.

On the Hunt
The original DVD had several easter eggs, and the box art here lists Easter Eggs as a special feature, but where they are is unclear, as the menu structure doesn't match the original disc. 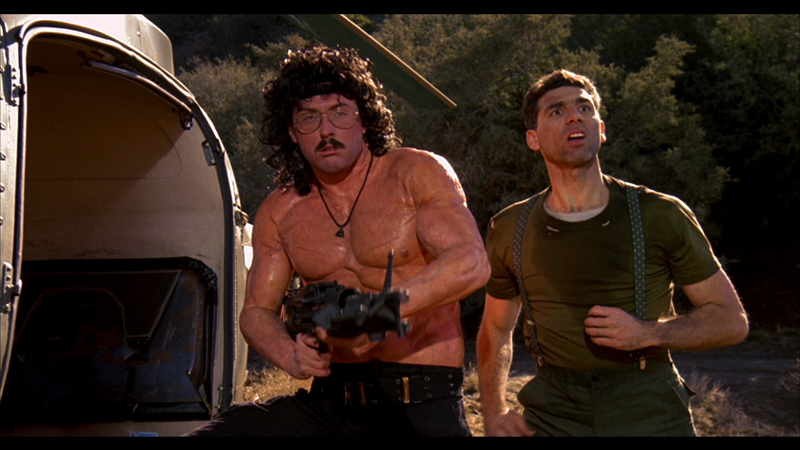 The Bottom Line
Though the very concept of the film, the story of small, independent UHF station, is outdated at this point, the ridiculous comedy of UHF holds up very well 25 years after it first arrived, on the strength of Yankovic's charm, an unusual and entertaining supporting cast and a shotgun approach to comedy that allowed for hit-or-miss results without any overall negative impact. It's all very goofy, but in a good way, resulting in a cult following in retrospect. The Blu-ray isn't blowing anyone away in terms of the quality but the extras, most of which are carried over from the earlier DVD, remain very entertaining, again thanks to Yankovic's involvement. If you're a fan, and you don't own the DVD, this is an obvious pick-up, while those looking to upgrade can look at the substantial new extra in considering an upgrade.