Kino // R // October 21, 2014
List Price: $29.95 [Buy now and save at Amazon]
Review by Stuart Galbraith IV | posted November 3, 2014 | E-mail the Author
Adapted from Sidney "I Dream of Jeannie" Sheldon's first novel, published in 1970, The Naked Face (1984) is a fairly good little thriller, not great, but better than one would have expected from Cannon Films, a company known primarily for its Charles Bronson and Chuck Norris action-exploitation films. The Naked Face has its share of flaws and its central mystery isn't all that difficult to work out, but it is reasonably entertaining, comparatively adult, and sincerely made.

Roger Moore stars as a Chicago-based psychoanalyst who inexplicably becomes the target of a murder plot. Moore, of course, was internationally famous as the suave, glamorous titular character on TV's The Saint from 1962 to 1969, and later as suave and glamorous James Bond, from 1973 to 1985 (with suave, glamorous Lord Brett Sinclair on The Persuaders! wedged in between). During those years Moore alternated those roles with movies that tried to break away from that screen persona. In the underrated North Sea Hijack (aka ffolkes, 1980) for instance, Moore played a bearded, misanthropic eccentric, while in Escape to Athena (1979) he was a German POW camp Commandant.

Many of these films, particularly The Man Who Haunted Himself (1970), Gold (1974), Shout at the Devil (1976), The Wild Geese (1978), and North Sea Hijack were quite good and Moore demonstrated that he was capable of a lot more than sipping shaken-not-stirred double martinis and embarrassing super-villains at the baccarat table. The Wild Geese was probably the most successful of Moore's non-Bond films, but even its grosses paled compared to the 007 movies.

The Naked Face was the last of these movies, made between his final Bond films, Octopussy (1983) and A View to a Kill (1985). Cannon Films was at the time trying to spruce up its image, financing or distributing more serious productions like Love Streams, Otello, Runaway Train, and Tough Guys Don't Dance, as well as more expensive, high-concept films such as Superman IV: The Quest for Peace. However, most of these flopped at the box office and The Naked Face was one of numerous Cannon titles to have its budget slashed midway through production. According to Moore partly it was retribution against director Bryan Forbes for letting his star return to England to attend to his ailing mother while the picture was still shooting in Chicago. However, unlike the painfully underfinanced Superman IV, The Naked Face doesn't look all that compromised.

Kino Lorber's new Blu-ray of The Naked Face is a winner all the way. The only extra is a trailer but the transfer is very good. 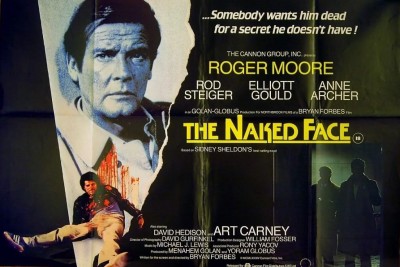 A patient of widower Dr. Judd Stevens (Roger Moore) is murdered blocks from Stevens's office, just minutes after walking out on his appointment. Later, Stevens's secretary is found brutally murdered, apparently tortured. Homicide detective Lt. "Mac" McGreavy (Rod Steiger) immediately pegs Stevens as his chief suspect, even though there's quite clearly no motive or evidence linking Stevens to those crimes. What is clear is that McGreavy holds a grudge against the doctor: a few years back Stevens's testimony ensured the institutionalization (rather than a lifetime prison term) of a man who killed McGreavy's partner and nearly crippled him. Even McGreavy's current partner, Det. Angeli (Elliott Gould), is troubled by McGreavy's clouded judgment. After two gunmen posing as doorman invade Stevens's apartment, leaving at least one bullet in a wall, McGreavy still adamantly refuses to consider the obvious, that one of Stevens's patients may be trying to kill him.

Who is responsible, and why? Stevens has no known enemies. Could it be one of his patients? The nymphomaniac? The troubled wife (Anne Archer) begging off treatment? Or might it be Stevens's brother-in-law (David Hedison), the sister of Stevens's dead wife, who stands to inherit a large sum of money if Stevens is dead?

In some respects The Naked Face resembles The Man Who Haunted Himself (which Forbes produced) minus that film's fantastic, Twilight Zone-like base. In both films Moore plays a character victimized by strange, inexplicable events while those around him refuse to accept his version of what seems to be happening to him. As in that earlier film, Moore is quite good; he would have made a fine protagonist in similar Hitchcock thrillers. (Moore did appear once on Alfred Hitchcock Presents, but as a Scotland Yard inspector.)

As a mystery, The Naked Face is a bit far-fetched but it also has its share of surprises and is solidly constructed, even if its mystery is fairly easy to solve. There are nice little touches here and there: one scene has Stevens menaced by a wheelchair-bound hit man riding a custom-built motorcycle (he drives from the sidecar). James Bond fans can't help but notice that the beginning and end of the film coincidentally mirror iconic images (which I won't give away here) from the Bond novels and films.

Actor-turned-director Forbes also wrote the script. He seems to have retained much of Sheldon's dialogue from the novel, maybe because the British-born Forbes lacked the confidence to write American-sounding dialogue. However, it's often rather flowery, the kind of speaking that works in a novel but which sounds unreal in a movie. McGreavy and another pivotal character near the end deliver prolix monologues that don't much resemble "real life."

However, Forbes was a good director of actors, and the acting for the most part compensates for the script's deficiencies. Besides Moore, Elliott Gould is unexpectedly good in a real offbeat part. He holds his usual smart-alecky screen persona in check, delivering an impressively subtle, low-key performance that, at least initially, is quite sympathetic and believably human.

Gould may also have dialed it back because in most of his footage he's opposite scenery-chewing Rod Steiger. Looking somewhat different here (he lost some weight, had a face-life just prior to shooting, and wears a toupee) Steiger huffs and puffs his way through the film, audibly breathing heavily through his nostrils contemptuously at Stevens, and constantly fiddling with a watch chain, an actorly trick. Nevertheless, it's an entertaining and effective performance, if over the top.

David Hedison, who had appeared with Moore in Live and Let Die (as Felix Leiter) and North Sea Hijack, has a more substantial role here, and he's very good also. In the film's second half, Art Carney turns up as an experienced but two-bit private investigator Stevens turns to for help. Undoubtedly cast because of his similar character in The Late Show (1977), Carney has good screen chemistry with Moore, but his role here is a small one.

The Naked Face looks good on Blu. Presented in its original 1.85:1 widescreen format, the picture is solid throughout with typical mid-‘80s-era grain and (Metro)color. The movie seems to have only ever been released in mono, but the 2.0 DTS-HD Master Audio, English only with optional English subtitles, is otherwise strong. The disc is Region A encoded.

The lone supplement is a trailer, in high-def, and complete with narration and text. As with most Cannon titles, the trailer does a good job selling the picture, despite including one significant spoiler, so you'll want to wait and watch it after the feature.

A pleasant surprise, The Naked Face isn't bad at all. It's far from perfect but I rather enjoyed it, plus the high-def transfer is good. Recommended.