Blue Underground // R // October 28, 2014 // Region 0
List Price: $29.98 [Buy now and save at Amazon]
Review by Stuart Galbraith IV | posted October 23, 2014 | E-mail the Author
I first saw Sergio Corbucci's Compañeros (1970) when it was part of a five-movie DVD boxed set called Once Upon a Time in Italy, released ten-odd years ago by Anchor Bay. Despite its reputation among Spaghetti Western buffs, I found the picture less interesting than three of the other titles in the set (A Bullet for the General, Four of the Apocalypse, and Keoma). Nevertheless, when Blue Underground announced a Blu-ray release of Compañeros I thought I might like it a lot better the second time around, especially since I'd seen scores of vastly inferior Spaghettis in the years since.

Unfortunately, neither time nor a more complete perspective on this sub-genre seemed to improve Compañeros, at least for me. Indeed, all of its flaws only seemed more glaring on a second viewing. In some respects it's still above average by Spaghetti Western standards - the bar being rather low to begin with - but it's undeserving of its classic reputation. Confused by my reaction, I looked to an old DVD Savant review and, to my surprise, Savant's reaction and all of his complaints are almost identical to mine.

The video transfer further hampered my enjoyment. Blue Underground was criticized for its artificial sharpening of Django some years back, but now they seem to have gone to the opposite extreme. One hates to complain about a desirable title from a favorite label, but the filmed-in-Techniscope Compañeros simply looks terrible. Instead of artificially sharpening the image, the inherent graininess of the 2-perf Techniscope process has been eradicated at the expense of any sharpness at all. The image is soft throughout, resulting in a presentation that looks like DVD. 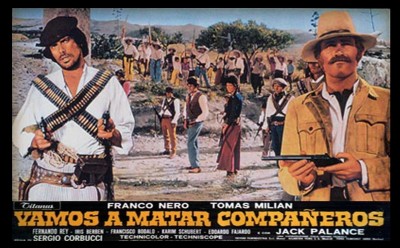 Set during the Mexican Revolution, the movie mainly pits two antiheroes against one another: illiterate shoeshine boy-turned-self-important revolutionary Vasco (Tomás Milián) and in-it-strictly-for-the-money, Italian-accented Swedish gun arms dealer Yodolf Pederson (Franco Nero). Together and apart, they find themselves up against a self-serving warlord, Mongo (Francisco Bódalo), as well as an (apparently, see below) American, pot-smoking sadist named John (Jack Palance). Caught in the middle of all this is a saintly, sincere, and professorial revolutionary Xantos (Fernando Rey).

Reportedly more than 600 Spaghetti Westerns were made between 1960 and 1980. The success of Sergio Leone's A Fistful of Dollars (1964) resulted in an industry-wide shift virtually overnight. Italian filmmakers who'd been toiling away churning out mindless sword-and-sandal films stopped making those kinds of movies in favor of Leone-styled cynical Westerns. Some would argue only Leone's five Westerns are any good, but in fact the Italians (sometimes working in conjunction with Spanish and/or West German production companies, as here) did make other good Spaghettis, just not a lot. Of the many hundreds the vast majority are instantly forgettable, with maybe only another two dozen or so that are truly memorable.

Director Sergio Corbucci made several of the better ones, notably Django (1966), with Franco Nero, and the awesomely bleak The Great Silence (1968), but he also did Navajo Joe (1966), a terrible Spaghetti with a great Ennio Morricone score. Morricone also wrote the music for Compañeros, which has a terrific musical motif unfortunately repeated far too often.

Compañeros' main claim to fame is Corbucci's supposed "politicizing" of the Spaghetti Western with this picture, though he was hardly the first: Leone's Once Upon a Time in the West (1968), the greatest of all Spaghettis, has a plot with a strong political underpinning, i.e., capitalist railroad tycoon hires sadistic hired gun to facilitate "progress."

The politics of Compañeros come in the form of the revolutionaries. The screenplay posits hero-generals like Mongo as mercenaries in disguise, while the true believers, mostly young students dressed more like 1960s Eastern Europeans than Mexicans (possibly the point), are hopelessly naïve. Fernando Rey's performance is so good one almost accepts his impossibly virtuous, intellectual revolutionary at face value, even though he's too good to be true.

The film pays lip service to its hip audience in making the mostly off-screen Americans bad guys who put U.S. oil riches ahead of the best interests of the Mexican people, but mostly Compañeros trivializes this and other potentially potent content with flip remarks and jokey action. Case in point, Milián's beret with a medal pinned on it, unavoidably turning the Cuban-born actor into the spitting image of Che Guevara. But what's the point?

And, as Savant observed, it's much more a Spaghetti riff of "radical chic" movies like Butch Cassidy and the Sundance Kid, with antiheroes Vasco and Pederson (whom the former calls "Penguin") forever cracking wise, even when tortured and threatened with execution. And, like Clint Eastwood and Eli Wallach in The Good, the Bad, and the Ugly, each tries to gain the upper hand from the other. I also agree with Savant that Corbucci's direction here is often just plain sloppy, with a particular overuse of meandering zoom shots.

Nero and Milián were two of the biggest non-Hollywood stars in the genre, though this was their only film together, reportedly because Nero felt Corbucci had shortchanged him, emphasizing the buffoonery of Milián and his character. They have undeniable chemistry and their scenes together and apart are superficially entertaining, but there just ain't no meat on this bird.

The sole Hollywood name in the cast is Jack Palance, who around this time seemed to accept roles in anything offered him and usually phoned in his performances. Here, he's smoking dope in virtually every scene, given an artificial hand to add a little color, and he speaks with a strange accent I couldn't tell was Irish, Spanish, or maybe both. Your guess is as good as mine.

As noted above, Compañeros is a major disappointment on Blu-ray. Though "freshly transferred in gorgeous High Definition from the original negative" (according to the packaging), the image is extremely blah throughout. Techniscope movies, owing to their 2-perf high format, traded depth-of-field and lack of distortion (vs. anamorphic widescreen) at the expense of higher grain. This is to be expected. A little grain never hurt anybody. But here it's been wiped clean and replaced with a frustrating softness, to the point where it hardly looks like high-def at all.

On the plus side, the DTS-HD mono is fine, and both the 115-minute English cut and the 119-minute Italian version are offered. (The longer cut mostly provides some background information on Nero's character.) As Nero, Palance, and I think Milián are all heard on the soundtrack, and everyone else reads their lines in English, I opted for the slightly shorter version, having seen the longer cut on DVD. English, Spanish, and French subtitles are offered, and the disc is region-free.

Definitely worth seeing but nowhere near as good as its stellar reputation would suggest, the added disincentive concerning the transfer means you'll want to Rent It first before buying.