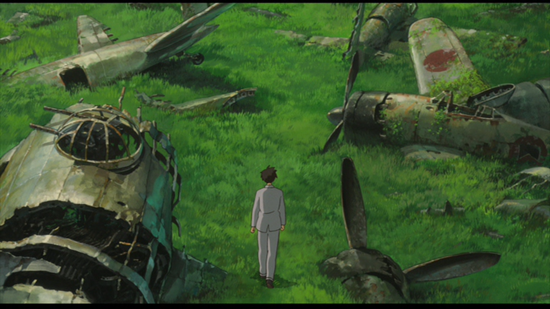 Please Note: The stills used here are taken from the DVD portion of The Wind Rises.

Or, Jirô Dreams of Flying: The Wind Rises feels especially elegiac as it will likely be the last film written and directed by animation legend Hayao Miyazaki (who announced his retirement shortly before its release). This grand, evocative, plainly expressed love story set against the aviation scene in pre-World War II Japan was also one of the final releases from the venerable Studio Ghibli before it halted production in 2014. Lacking the weirded-out grandeur of Miyazaki classics like Princess Mononoke and Spirited Away, this understated, achingly lovely film nevertheless stands as wondrous evidence of his artistry and skill with intimate storytelling. People who have never experienced Miyazaki's films would do well by Disney-Touchstone's Blu Ray/DVD combo release, which includes a good English-language dub to better savor the awe-inspiring imagery.

The fact that The Wind Rises has a reticent, geeky aircraft engineer as its main protagonist should clue viewers into the fact that this is a different kind of Miyazaki film. First seen as a plane-obsessed young boy, the character of Jirô Horikoshi eventually realizes he could never grow up to be a pilot due to his nearsightedness. Instead, he concentrates on becoming a great aircraft engineer - buoyed by dreamt-up visions of his idol, the famous Italian aeronautical designer Giovanni Battista Caproni. As a young man traveling to his university in 1923, Jirô meets a curious young girl, Naoko, before the train they're riding is struck by the Great Kanto Earthquake. Jirô's calmness and quick thinking help save the girl and her injured mother, who expresses her gratitude by anonymously giving him a gift. Eventually, Jirô and his roommate Honjô get jobs at one of Japan's top engineering firms, where Jirô becomes a team leader to help streamline the design of classified military aircraft. On a business trip, he comes across the adult Naoko, who confesses that she's loved him since the earthquake. Now a married man caring for the ailing Naoko, Jirô forges ahead with his dream while the clouds of World War II are forming.

Since aircraft engineering requires equal amounts creativity and analytical thinking, one can see why this story appealed to Miyazaki - to his credit, he does a fantastic job of getting into Jîro's head and visually explaining those two dynamics at work. Jîro was modeled after Jîro Horikoshi, the Japanese engineer who designed the Zero aircraft which eventually bombed Pearl Harbor. Miyazaki imbues the movie with the subtle irony that this unassuming character was involved in creating something that destroyed so many lives (shades of the WGN drama series Manhattan). Mostly, however, the film is about coming to terms with the fact that our lives never come out as neatly as they're envisioned to be. The characters' gestures and glances carry as much weight as what is explicitly spoken, which calls to mind the great Japanese filmmakers like Kurosawa and Ozu. Though it seems genteel and a little bland at first glance, this is the kind of movie that resonates with repeated viewings.

The hoopla over Miyazaki's retirement helped make The Wind Rises a success in his home country (over there, it became the highest grossing Japanese-language film of the year), although his longtime U.S. distributor Disney seemed a bit stymied as to how to market this subtle drama without the usual Studio Ghibli quota of plucky heroines and fantastic creatures. As a result, they ended up releasing it here under their adult-oriented Touchstone banner (the word "Disney" is nowhere to be found in the home video edition's packaging). Besides the intensity of the earthquake and scenes showing planes breaking apart in midair, and a coy reference to Jiro and Naoko's honeymoon sex, the film is fine for open-minded children and their parents. 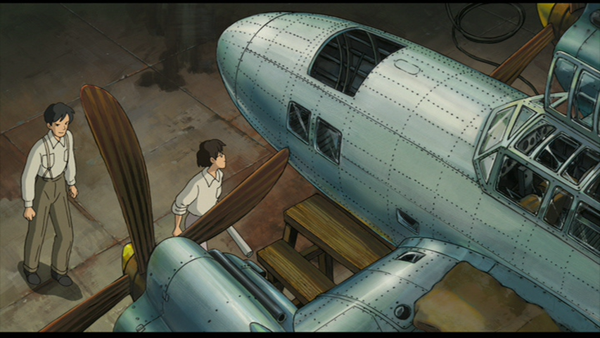 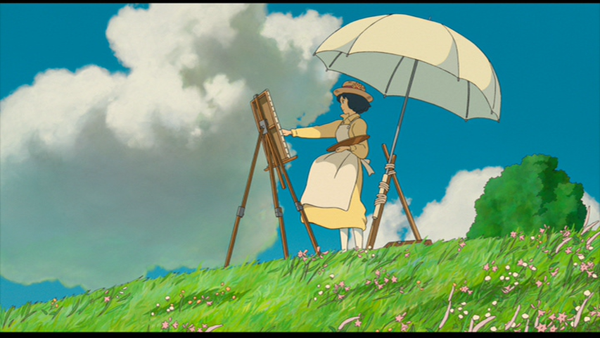 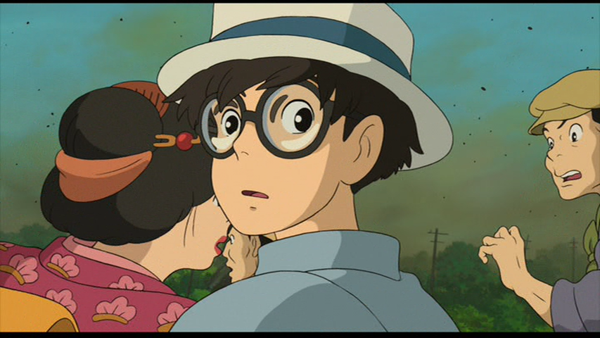 The 1080p high definition 1.85:1 image used on the Blu Ray edition of The Wind Rises showcases the detailed animation and lush colors handsomely. With animation, there's always the possibility that the sharp-edged drawings may come out overly sharpened and jagged on a digital transfer. This particular image looks great, however, with a pleasingly soft look and vibrant colors.

A 1.0 DTS-HD Master Audio track is provided in clean mixes for both the original Japanese soundtrack and a professionally done English-language dub. While it seems odd that a recent film would be released with mono sound, the final mix ended up being so pristine sounding that most viewers likely wouldn't notice the lack of stereo. The music seemed mixed in too loudly at certain times, but for the most part this was a fine audio track.

The 11-minute Behind the Microphone featurette has Joseph Gordon Levitt, Stanley Tucci, Emily Blunt, William H. Macy and The Wind Rises' English-language director Gary Rydstrom speaking on the challenges of dubbing dialogue and adapting the script while staying true to Miyazaki's vision. The Blu Ray edition of the film also contains a feature-length Storyboard Presentation and Announcement of the Completion of the Film, a 72-minute (no, that's not a typo) Japanese press conference with Miyazaki, Hideaki Anno (voice of Jiro) and Yumi Matutoya (singer-songwriter whose 1973 hit "Vapor Trail" scores a decisive moment in the film). A selection of Japanese theatrical and television Trailers which heavily use Matutoya's song are also included.

Beautiful. If indeed The Wind Rises winds up being Hayao Miyazaki's final film (as the animation legend insists), he will have gone out on a graceful, high note. Highly Recommended. 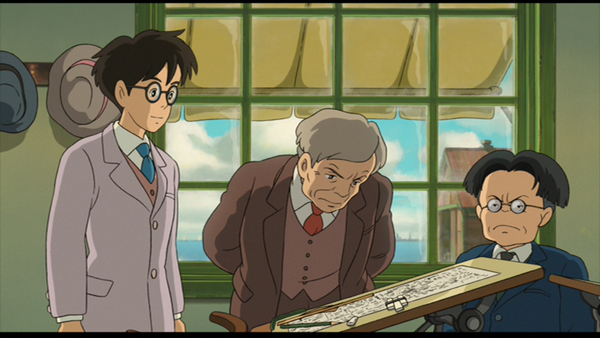 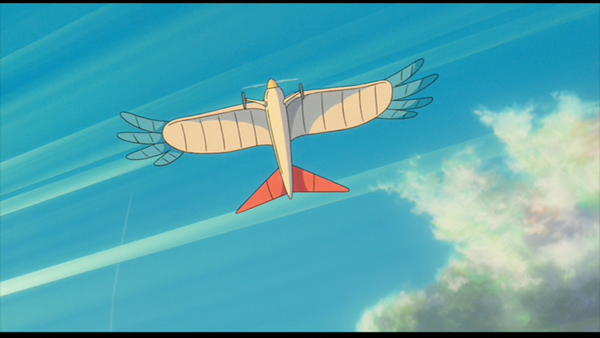