Buffalo Bill and the Indians, or Sitting Bull's History Lesson

Buffalo Bill and the Indians, or Sitting Bull's History Lesson (1976) is the full, long-winded title of Robert Altman's contrastingly one-note, at times insufferable Western, which mostly is an application of the style and production techniques he employed so brilliantly in Nashville (1975). Buffalo Bill was his first film after that masterpiece of ‘70s cinema, and a not-dissimilar if 19th century further exploration of "the show business."

The project had its origins as a follow-up to the wildly popular Butch Cassidy and the Sundance Kid (1969), which would have reunited star Paul Newman with that film's director, George Roy Hill. Altman eventually took over, rewrote the script with protégée Alan Rudolph, and every frame, for good or ill, emphatically bears Altman's stamp. Audiences expecting something as audience-friendly as Butch Cassidy or comparatively conventional like John Wayne's or Clint Eastwood's ‘70s Westerns probably were baffled by the muddled, belabored effort. As a Western it's mostly terrible, despite some interesting elements; as an Altman film coming on the heels of Nashville it plays a little bit better, and might even have worked with a more focused, disciplined script.

Kino Lorber's transfer, provided by MGM, is okay but far from the high standards set by Criterion with their Blu-ray release of Nashville. Buffalo Bill and the Indians looks like an older transfer, one rife with dirt and generally blah, even taking into account Altman's grungy use of the Panavision format. The audio and extras also disappoint. 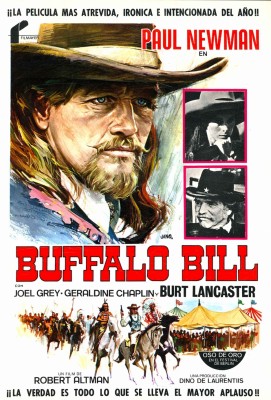 As with Nashville, Buffalo Bill and the Indians is, uncomfortably, an ensemble film, uncomfortable in the sense that it's also trying to be a star vehicle for Paul Newman, who's given several indulgent monologues stylistically and structurally at odds with the rest of the picture. Indeed, the last major scene is a long monologue better suited to Altman's Secret Honor than a Western about Buffalo Bill. It's terrible. Though its story seems to cover a five-year period, between 1885 and Sitting Bull's fatal shooting in 1890, the movie is structured very much like Nashville's meandering, five-day tapestry.

From the start, William F. "Buffalo Bill" Cody (Newman) is presented as a fraud who can't shoot (his pistols are loaded with buckshot to create the illusion of a sharpshooter), is an inept tracker, and can barely stay on a horse. His trademark long blonde hair is a wig, and even his staged battles are rigged in his favor. He surrounds himself with sycophants like Nate Salisbury (Joel Grey), the producer; Maj. John Burke (Kevin McCarthy, enjoyably colorful), the publicist; and Ed Goodman (Harvey Keitel, miscast), the relative. They go so far as to have the show's brass band herald his every arrival and departure.

All of this is revealed in the movie's first 15 minutes, much of it even before Newman's first appearance. Co-writer Altman seemed to think this "print the legend" approach was a new-fangled idea, forgetting perhaps that John Ford, among others, already explored this theme far more poetically in The Man Who Shot Liberty Vallance (1962), as did Arthur Penn, more wittily, in Little Big Man (1970).

What plot there is revolves around Cody's adversarial relationship with Sitting Bull (Frank Kaquitts) and his Indian interpreter, William Halsey (One Flew Over the Cuckoo's Nest's Will Sampson) in engaging the Indian Chief (who led his people to victory against Custer's troops at the Battle of Little Big Horn) for Cody's Wild West show. Little Big Man, while more deftly skewering myths about the Old West and its famous historical figures, was among the first modern films to propagate a new if more favorable Indian stereotype: Native Americans as mystical, circumspect soothsayers. Little Big Man's depiction of Indians is actually far more complex than that, but the same basic approach is taken here. Cody is a self-absorbed blowhard, an egomaniac in constantly demanding an audience, while Sitting Bull, by his mere presence and saying nary a word, threatens Cody's self-styled but utterly false image as the iconic American pioneer-hero and Indian fighter.

The authentic look of Buffalo Bill's Wild West show (despite a few glaring inaccuracies) offsets Altman's jarringly singular production methods. But it's not so much the style - indeed, the ensemble nature of Cody's show favorably mirrors other Altman films - but rather the script, which does little more than expose Cody as a fraud at the beginning then repeatedly hammers this notion to death, over again-and-again, until Cody, in the final shot, himself becomes a wild-eyed madman, which the real Buffalo Bill most definitely was not.

The actors are all fine, but as most are essentially playing "yes men," they have little opportunity to flesh out into three-dimensional characters (their make-ups and costumes do all the work). Even Altman regular Geraldine Chaplin, an inspired choice to play Annie Oakley, with John Considine as her devoted husband, Frank E. Butler, are short-changed by the script. Unlike Cody, she's the genuine article, a crack trick shot who even had a personal friendship with Sitting Bull predating the show. The movie somewhat unfairly depicts Butler as a talentless, nervous Nellie managing his wife's affairs (while, in a tossed-off line, sleeping with another woman), but mostly hers is a promising character left unfulfilled. Elsewhere, Burt Lancaster appears as Ned Buntline, superfluously functioning as a combination myth-maker/Greek chorus/Cody's conscience/Mephistopheles (and thus making this character's purpose more than a little muddled, too). His scenes almost play tacked on as an afterthought until near the end, when he shares one long scene with Newman. (Reader Sergei Hasenecz adds, "The one thing Altman gets right in this movie is Lancaster's exit: riding off in the night, his horse nimbly vaulting a fence. It's a momentary visualization of pure Western myth. In real life Buntline was a myth-maker not only of Buffalo Bill, but himself.")

By all accounts, Newman and Altman had a whale of a time on location - the entire film takes place in and around a single mammoth set of Buffalo Bill's Wild West, built in Alberta, Canada - but in indulging his star Altman allowed Newman to deliver a disengaged, superficial performance bereft of any humanity or insight. The character would seem to call for a darker version of Professor Harold Hill. Unlike, say, Robert Preston's hypnotic interpretation of Hill in the film version of The Music Man, Newman's Cody is a charlatan minus the charm. Any charm. Newman flashes his impossibly white choppers a couple of times, but even his innate, burning screen charisma refuses to peek out from behind that goatee and those flowing locks.

Altman, perhaps disingenuously, disowned the film, claiming producer Dino De Laurentiis recut it in an attempt to make it more conventional, mucking up delicate character relationships among Cody's acolytes. But the movie's problems are more fundamental; perhaps Altman's original cut was better, but it's unlikely to have been much good, either.

Presented in its original 2.35:1 Panavision format, Buffalo Bill and the Indians looks only okay. The image is rife with dirt, and the opticals are notably soft and dirty as well. Color is good, but the image never "pops" like it should. Further hurting the film is the disappointing DTS-HD MA 2.0 mono. The movie, like Nashville, was intended to be heard in 4-track magnetic stereo using Dolby (then Dolby System) noise reduction. The audio here is simply flat and dull, again a far cry from Criterion's superb adaptation of Nashville's multi-channel sound. English subtitles are included, and the disc is region A encoded.

Supplements are limited to a vintage featurette from the period, "From the Prairie to the Palace," which probably ran on network television between the end of a prime time movie airing and the 11 o'clock news, and two "trailers." They're listed as a "teaser" and "original trailer," but from what I could tell, these 4:3 films were essentially identical, with the "trailer" missing narration heard in the "teaser."

Despite the germ of a potentially great film and talent to spare, Buffalo Bill and the Indians was and is a major disappointment, not without interest for Altman fans, but pretty deadly nonetheless. Rent It.