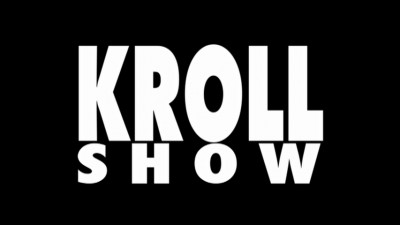 
The Show
In reviewing Nick Kroll's 2011 stand-up special, I summed up the show by writing "If this special was an hour of Kroll on stage with a mic telling jokes, I would be hailing it as a new classic of stand-up comedy, but his character sketches kill the momentum and are honestly not too funny, especially when they follow Kroll's far funnier jokes."

Well, apparently, if you take those sketches and put them in their own show, they get a lot better, which is exactly what Comedy Central's Kroll Show delivers. The obnoxious Bobby Bottleservice (a frequent part of this series) and Fabrice Fabrice (thankfully far rarer a character) remain Kroll's least enjoyable bits, but they are surrounded by a cast of unique and hilarious characters, who are uniformly entertaining, and who make each episode fly by in a hail of jokes.

Aiming squarely at television, the series is a blend of parodies, drawing heavily from the comedy-friendly world of reality television. Kroll and company smartly play off of the now-standard trope of giving series to secondary subjects on reality shows, so the series "PubLIZity," which focuses on awful PR people Liz (Kroll) and Liz (Jenny Slate), begets a string of series starring the frozen-faced pet plastic surgeon Dr. Armond (Kroll), including shows for his corpulent turd of a child Roman (Andy Milonakis) and C-czar (Kroll), the teen thug having sex with his second ex-wife, along with a show about Liz and Liz' assistant and her morbidly obese father. The incestuous world of reality TV naturally circles back of course, connecting Liz and Liz with C-czar, with Dr. Armond being seemingly ever-present, culminating in the second-season finale, which throws everything in the blender. 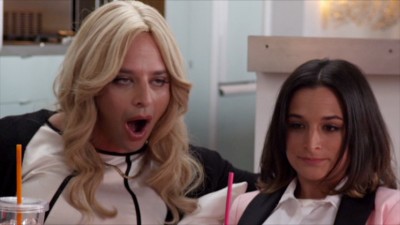 The reality show segments tend to get by on their ridiculousness, but the pairing of Kroll and Jon Daly on "Rich Dicks," which follows a pair of super-rich jerks who just get high and ruin everyone else's lives, is surprisingly capable of succeeding beyond the momentary benefit of the doubt provided by the self-explanatory title, especially when you add in Amy Poehler as Daly's sister (and Kroll's lover) in the second season. Kroll's characters are all tremendously distinct, with Kroll's mastery of bizarre vocal styles being they key, be it the awful Pennsylvania accents of the stars of the pawn-shop show "Pawnsylvania" or Big Liz' tortured squeals. (Seriously, are there worse accents than Philadelphia and Pittsburgh? Maybe Boston.)

The best of the reality show material is an amalgam of several types of series, as Armond is accused of killing his pneumatic wife, leading to trial coverage, commercials, panel shows and several reality series getting in on the multi-episode action. Bringing in Slate again as prosecutor Ruth Diamond Phillips, Bill Burr as an obsessed detective and Ron Funches as Armond's giggle-prone defender just puts the whole storyline over the top as some of the series' best work (no matter how much you want to punch the television every time Armond is on the screen.)

If you're looking for the show's pinnacle however, you have to look to the North, where the show took inspiration from the earnest teen soap Degrassi High to create the utterly brilliant "Wheels, Ontario," the story of Mikey, a young Canuck from Saskatoon freshly transplanted to a new school in Ontario (where he happens to be the only non-disabled student), and how he deals with the assorted teen drama that brings. All of it is told from a distinctly Canadian perspective (read: polite and tax-funded) and it's all hilarious, especially when the show bleeds into other segments, like a ridiculous music video, PSAs starring an actor on the show, and a terrible Toronto talent show with two of the stars as judges.

Other well-known TV elements get theirs as well, with the cable-access/prank show mash-up "Too Much Tuna" (with John Mulaney's oddly aggressive older man), a number of great commercials, for products like racist and homophobic chicken and foreign money-stealing scams; and strange documentaries and historical series, including stories of the young Billy Joel and Larry Bird. The layering of jokes and ideas is also a big strong point, like the Felicity parody that reveals itself to be something very different. The way the show bounces around so much in an episode could have resulted in a disjointed feel, but with Kroll's presence serving as a throughline, and interstitial interviews with cast and crew acting as the connective tissue, episodes flow smoothly. The tremendous guest cast doesn't hurt the series either, as you get to enjoy appearances by Jason Mantzoukas, Andy Daly, Seth Morris, Marc Evan Jackson, Chelsea Peretti, Maria Bamford, Will Forte, Jordan Peele, Craig Robinson, Seth Rogan, Nick Offerman, Ray Wise...if you enjoy good comedy, you are going to see a ton of great performers on this show. 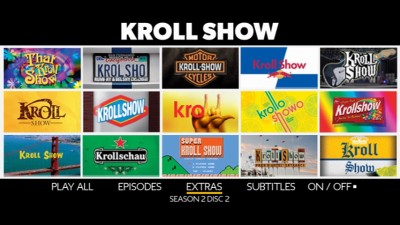 The DVDs
The first and second seasons of Kroll Show is spread over three DVDs, which are packed into a standard-width keepcase with a dual-hubbed tray. The DVDs offer slightly-animated anamorphic widescreen menus with options to play all the episodes, select shows, adjust the set-up and check out the extras. There are no audio options, but subtitles are available in English SDH.

The Quality
The anamorphic widescreen transfers look good, reproducing the variety of looks the series employs in its parodies well. Color is appropriate throughout, with the brighter hues coming across well without burning, but it's definitely not HD, with some softness to the presentation, along with some minor aliasing. Overall though, it's a solid-looking set.

Coming across a modern TV show with Dolby Digital 2.0 audio tracks feels like finding a unicorn, but it's pretty common for Comedy Central releases. The show sounds good, with fine separation between the music and dialogue, and no issues with distortion, while there's is some decent mixing between the two channels.

The Extras
Six commentary tracks are included, with participation from a mix of cast and crew, including Kroll, Daly, Slate, Mantzoukas, director Jonathan Krisel and producer John Levenstein. The chemistry between the collaborators is clear (especially between Kroll and Slate, and the best commentary with the three gigolos) as the conversation goes all over the place, with talk about the series' production, writing, The O.C., naked men lotioning themselves and Chelsea Peretti's boobs, making for fun listens. Here's the breakdown of the tracks:

Though it is just pulling top from the season-one episodes, you also get episode 200, "The Greatest Hits of It" (21:20), a promo for season two. The new material here is the interstitials, which feature Kroll, Slate, Mantzoukas, Daly and Peretti, who enjoy themselves as they talk about the series (though they apparently do not know what the show is.) It's better as an intro for someone new to the series.

The set includes plenty of additional footage, starting with 26:23 of uncut footage from the Armond trial. The sketches from this storyline are great, and this pile of clips makes it even better, with more from Slate (the MVP here), Funches, Burr, Peretti, Milonakis and Bamford. Also here are a quartet of clips that seem like they were intended to be promotional in nature, with a tearful video valentine for moms from Bobby Bottleservice (1:02), a promo for "PubLIZity" centered on Pretty Liz' pregnancy (2:52) and two clips from the "Kroll Choice Awards", with a character compilation (:42) and a live performance by Justin Bieber-esque "Wheels, Ontario" star Bryan LaCroix (1:01). These are less successful, and aren't too different from material in the show.

For fans of the show's often catchy music, there are a few extras worth checking out, with three brief music videos (including the amazing "Oh Armond" song) and seven karaoke videos (which can be watched with or without the original vocals.) The karaoke videos are basically the same joke seven times, but the idea is well-done. Anyone who performs karaoke with one of these tracks deserves respect, very much. 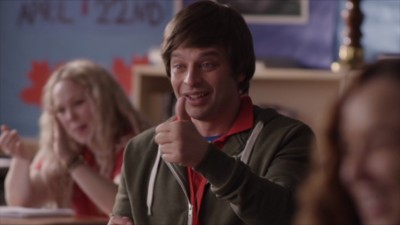 The Bottom Line
With Kroll Show, Nick Kroll proves him to be adept at creating characters, and he surrounded that talent with a great team that produced two seasons of terrific sketch comedy behind his lead. This collection looks and sounds fine, and has a nice spread of bobys content for the performer's fans to enjoy. If you enjoy Kroll and his very strong collaborators, or even if you just enjoy sketch comedy, this is a well worth tapping. Even if just for "Wheels, Ontario." Seriously. Give me a new series, all "Wheels, Ontario." Please and thank you.