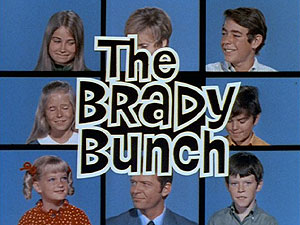 
The Story So Far…
Mike and Carol Brady got together in 1969 and for five seasons they shared their three girls and three boys, creating an idyllic fantasy home life for a country that was locked in turmoil. Today, it may be dated and goofy, but it's still entertaining when taken as part time capsule, part cheesy family-friendly comedy.

The Show
Though Jan got plenty of attention in Season Two, this set is where she unleashes her most memorable catchphrase, lamenting her status as a middle sister. Her "Marcia, Marcia, Marcia" explosion was just one part of Jan's growing-up, as she struggled with glasses, the idea of aging, and living in her sister's shadow. As the least sympathetic of the kids, she was the most grating personality, and the episodes that focused on her were a drag.

Peter was coming into his own as well, and his adventures in puberty were just barely more interesting than Jan's. Between his efforts to find a personality, his troubles at school and his attempts at spying all helped to make him into a kid you'd love to hate. It's interesting how the two middle kids, who claimed to suffer from being middle kids were really just annoying. Maybe it was self-fulfilling prophecy. 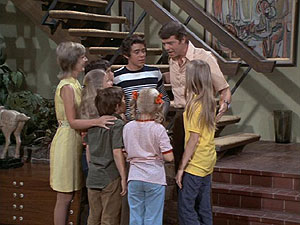 With all the kids getting older, it was certain that Bobby and Cindy would start to get some spotlight, and this season was their time. Five episodes would showcase the littlest Bradys, all of which are about being a kid. When that's all you've got going for you, I guess you go with it. In his efforts to fill time until he discovers girls, Bobby tries stretching himself, creating a secret admirer for Cindy and joining forces with her to attempt a world record on the see-saw. It's a time to forget for most viewers.

Marcia and Greg have their moments in the sun, including the famous episode with Monkees hunk Davy Jones, but for the most part this season is about the younger kids. This season also sees the group take part in one of their epic multi-episode arcs, this time with a trip to the Grand Canyon. Driving from their California home to the tourist spot, they make a detour to a ghost town, where they run into a crazy old prospector (played by Jim Backus) who locks them in a jail cell. The story runs three episodes, the first three of the season, and rivals the fourth season's popular Hawaiian vacation. Only the Bradys could end up in the situations they find themselves in on vacation.

While these episodes are well-known, one of the best is the season finale, "The Fender Benders." With guest star Jackie Coogan (Uncle Fester from The Addams Family) on board as a litigious driver, the Bradys recreate Rashomon for the prime-time set. I can't put my finger on why this episode is so good (possibly it's just the cosmic effect of the Addamses and the Bradys smashing together) but it remains a memorable one because it might be the most involved plot ever seen on the series. Plus, it gave me a chance to reference Kurosawa in my The Brady Bunch review. 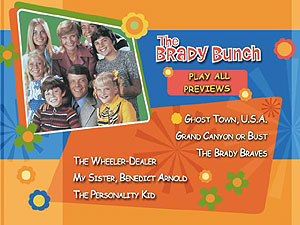 The Discs
An exclusive release for Target, the third season of The Brady Bunch hits DVD with a newly-pressed four-disc set of the same content released in 2005, though this time it's packaged in a clear, single-width keepcase with a dual-hubbed tray. In the case is a two-sided cover that has an episode guide on the inside, while the slipcover repeats the stylish new cover art (a big improvement over the original set's) with added embossing and spot-UV coating. The discs feature the same static, full-frame menus as before, which list the episodes and include a play-all feature. The menus are standard across the four discs, and are just as groovy as the previous seasons. There are no subtitles or language options, but the episodes do have closed captioning. This season, the old "Brady Bunch IN COLOR" still image was dropped, sadly.

The Quality
No changes here, so these reports are mainly the same:
The full-frame video for these episodes isn't as good as the first season, with plenty of visible dirt and damage. Some episodes, like "The Personality Kid", are a serious mixed-bag, with scenes that look like the screen is covered with Vaseline, followed by scenes with needle-sharp focus. In the middle of some scenes, the clarity changes with the choice of angles. It's stunning how inconsistent it can be. The only solid feature is the color, which looks good as long as the focus is in place.

The audio for the series is a Dolby Digital 2.0 presentation of a mono mix, and it sounds crystalline, with nice clarity on dialogue and the organ music during scene transitions. Even the Brady Six' songs sound good.

The Extras
Paramount once again doubles-down on disappointing the fans, leaving their discs free of any kind of entertaining extras again. Considering there's a full hour less episodes on this set than on the first, you think they could have scraped together at least a couple of promos or something. Instead, you get the same previews as before. At least they finally ditched the Happy Days commercial. 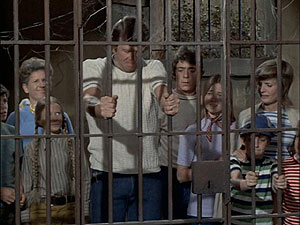 The Bottom Line
The third season marked the emergence of adolescence in two of the more annoying Bradys, but it also brought some very memorable moments like the clan's epic Grand Canyon trip, Peter's Bogart imitation and voice change, the Brady Six and Davy Jones. The DVDs stil aren't very impressive in terms of the video, while there's once again no extras (for a second time.) For fans who bought the first two, the third is an easy buy, but those picking and choosing the Brady Bests will likely skip this one.