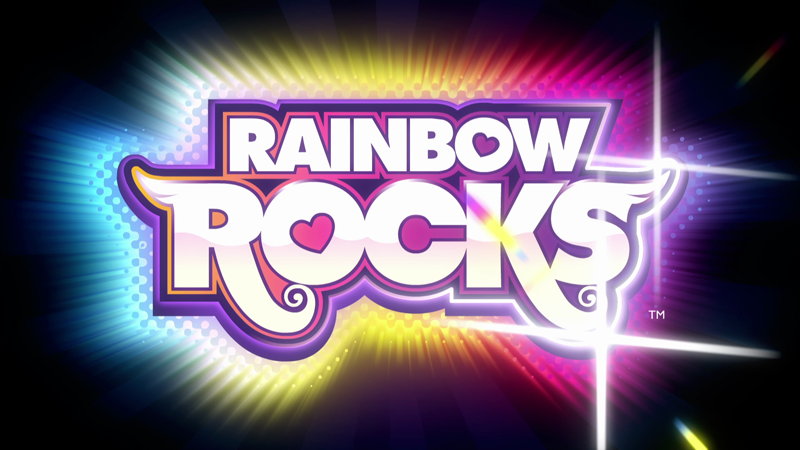 The Movie
Though I'm no Brony, I certainly enjoy watching My Little Pony: Friendship is Magic with my daughter, as it has a fun sense of humor and an enjoyable animation style. Thus, I have a working knowledge of the franchise. What I was unaware of was the nature of the Equestria Girls offshoot, which to me looked like the brand's attempt to snag some of the fashion doll market, using the fans of the ponies as a foot in the door. My daughter's Rainbow Dash Equestria Girls doll confirmed this for me, as this humanoid version of the pony came with plenty of fashion accessories and a contemporary sense of style made to appeal to young girls who dream about what high school will be like.

I never watched the first Equestria Girls film, but my daughter certainly did, so she was excited to dig into the sequel. I was less enthusiastic, expecting something similar to the Monster High movies or, even worse, Bratz. However, as these oddly human-like characters started talking and, more importantly, behaving like their equine versions, the concern drifted away, especially as my daughter explained concepts introduced in the first movie. Essentially, Equestria Girls is an alternate universe take on the ponies, where instead of being animals, they are humanoid and attending school like any kind. That doesn't mean it wasn't a marketing ploy, but it's been handled well on the story side of things. 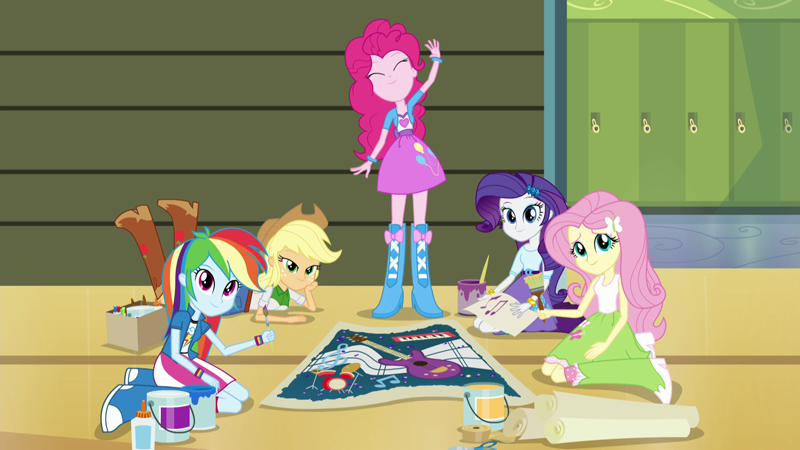 The plot here actually starts just before the end of the first film, as the final fight of the Mane Six (the core ponies in the show) against the villainous Sunset Shimmer, unleashed a wave of magic noticed by the Sirens, a trio of evil creatures banished from Equestria long ago, in the same form as this reality's ponies. They come up with a scheme to steal that magic from the ponies, built around a battle of the bands at Canterlot High. The ponies, minus Twilight, who returned to Equestria after the battle, have a band, The Rainbooms, who are drawn into that battle, not knowing about the danger laying in wait.

The ponies, aside from their look, and the fact that Sunset Shimmer is no longer a baddie (though still defined by her former self) are the same as ever, therefore Pinkie Pie is still a loveable goofball and Fluttershy is as shy and sweet as ever. However, in this world, the girls are all musicians, and in their music is their power, not unlike the Elements of Harmony seen the main series. The biggest advantage of this musical concept is the inclusion of more of the great pop songs the tv series is known for. This film is full of fun, bouncy tunes, especially during the climactic face off; a head-nodding good time.

The plot is pretty basic and predictable (12 minutes in, my daughter explained what she thought would happen over the course of the remainder of the film, and she was pretty dead-on) but it's in the journey that the fun lies. Well that, the ridiculous level of fan service going on in adapting the ponies into new alternate versions (even Derpy Hooves surprisingly gets a humanoid analog) and the general sense of fun and frivolity (there's a Daft Punk joke and Scott Pilgrim seems to have been an influence on the battle of the bands.) The evil group's plot, which rides on getting ponies to fight with each other, can get a little serious, but for the most part the film floats through with a fun-loving spirit that results in plenty of laughs and hugely-entertaining musical moments. 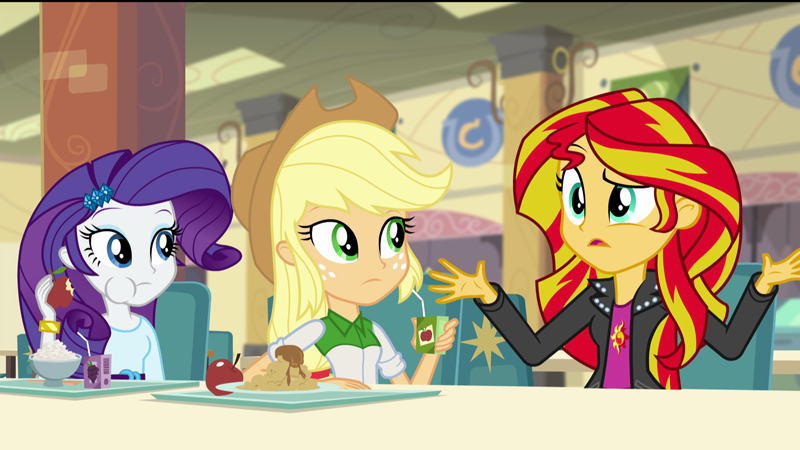 The Disc
This release arrives in a two-disc set (one Blu-ray, one DVD) packed into a standard Blu-ray keepcase with a two-sided cover and an attractive holofoil embossed slipcover that repeats the cover art. The disc's animated menu offers a choice to watch the film, select scenes, adjust the set-up and check out the special features. There are no audio options, but subtitles are available in English.

Note: The DVD included in this set has a problem that causes the film to play out of order. Replacements are available through Shout! Factory.

The Quality
The 1.78:1, 1080p, AVC-encoded transfer looks rather great, as the series was made for a format like Blu-ray, with some of the most vibrant color on television. Everything is wonderfully saturated without going over the tipping point, and the image is sharp and well-detailed. There's are a few quibbles one can find with a magnifying glass, but for the most part the presentation is just what the material deserves: eye-catching and over-the-top.

The DTS-HD Master Audio 5.1 tracks is powerful and clear, coming up strong where it counts, namely during the film's songs. The mix features some very impressive separation between the channels, resulting in some nice layering of sound, and some nice depth in the soundfield. The show's frequent use of small sound effects to punctuate moments, like the blow tickler heard with Pinkie-Pie's reactions, are also enhanced by the quality of this presentation.

The Extras
The extras start with a surprising entry, a feature-length audio commentary from Hasbro Studios VP of development Michael Vogel, Hasbro Studios Executive Producer Brian Lenard, writer Meghan McCarthy, Supervising Director Jayson Thiessen and co-director Ishi Rudell. A light, conversational track, it gets a bit bogged down in watching and narrating, but background info and animation detail is delved into, along with the inspiration for plot points, as well as credit for the crew who worked in the film. It's an enjoyable listen for animation fans.

Eight prequel shorts are included, ranging from 2:09 to 2:27. Several of these feature the Mane Six finding their musical talent and the related magic (with the exception of Twilight) while a few are music videos (for the songs "Perfect Day for Fun" and "Shake Your Tail") and one is a wordless musical sketch starring DJ Pon-3, a popular side character tailor-made for this film's focus on music. There are some very cute and amusing moments in these briefs segments, particularly during the bit with Fluttershy, Rarity and a gaggle of angry hamsters and the origin of Pinkie Pie's drumming.

Also available are a trio of karaoke-style sing-alongs, for the songs "Better Than Ever," "Battle" and "Rainboom Battle." Those are solid choices for this treatment, as these are songs younger viewers will likely want to sing out themselves. 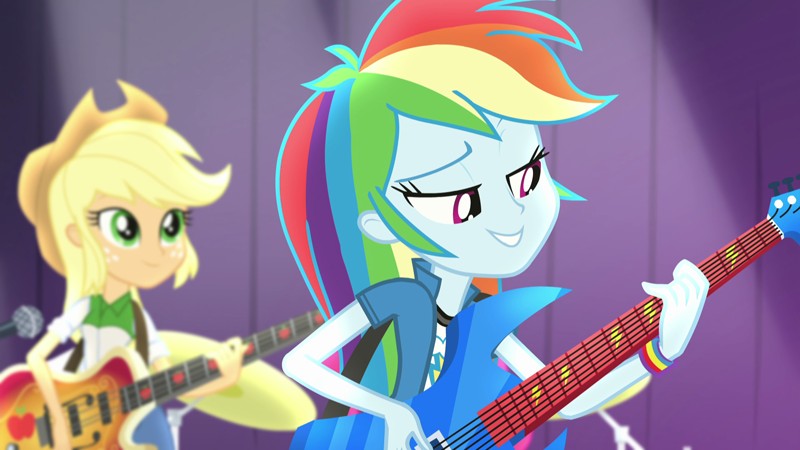 The Bottom Line
Expectations were low coming into this film, but the slightly more grown-up (and certainly more humanoid) adventures of the ponies won me over, as they were enjoyable to watch with my daughter, who was over the moon watching it. The presentation is excellent and there's a decent selection of extras for once for a My Little Pony release. For fans of the series, it's easy to recommend picking up this very enjoyable musical adventure.