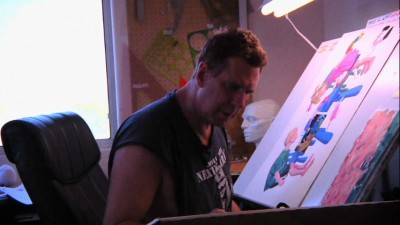 This is a bit of a weird one for me. Let's begin by getting all the disclosure taken care of. Rude Dude is a documentary about Steve Rude, an influential comics artist perhaps best identified for having co-created the sci-fi superhero Nexus in the 1980s. I read Nexus back then and was fortunate enough to end up working on the series as an assistant editor when it was being published by Dark Horse in the 1990s. That put me in contact with Steve Rude and Mike Baron, the book's writer, on a regular basis. As the movie demonstrates, they were both pains in the ass in their own way, but I enjoyed working with them and liked them as people.

In addition to that, I know a lot of the talking heads in this movie, either as casual acquaintances or as good friends. Last year, I happened to find my work in the same comics as Baron and Rude: both Nexus and my retro sci-fi private detective serial Integer City had a residence in the Dark Horse Comics anthology Dark Horse Presents. I am also currently releasing another comic book with the publisher.

All of this, sure, has created a bias in terms of how I watched Rude Dude, but revealing said bias is perhaps more important as an indicator of what a struggle the movie was for me. When I try to be objective, I don't think I judge the movie any more harshly because of my past connection with Steve Rude so much as I am trying to juggle my perception of the man with his portrayal on the screen. Then again, the fact that Rude Dude was up for review came to my attention because another writer here pointed it out to me, basically saying if anyone could give it a fair shake, it would be me, because someone unfamiliar with the subject randomly watching it might not have as nuanced a take on its Main Man (as Rude tends to refer to himself). Crazily enough, the day after the disc arrived in my mail, I saw Rude at a comic convention and conversed with him for the first time in more than ten years. This shit's weird. 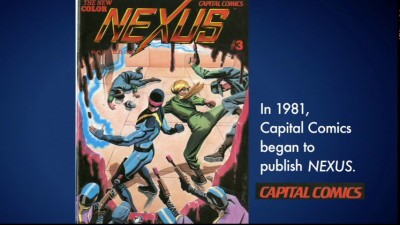 For those who don't know (and who are waiting for me to get to the point), Steve "The Dude" Rude is an accomplished comics artist whose signature style compiles the discipline of vintage illustration (Norman Rockwell, Alberto Vargas, Robert McGinnis, etc.) with the classic dynamism of 1960s comic books (Jack Kirby, Alex Toth, and then everyone else). Rude came to prominence in the burgeoning 1980s indie comics scene, publishing Nexus with Baron through the groundbreaking First Comics imprint. Nexus is the story of a cosmic executioner plagued with dreams of murderers and the power to remove them from existence. The series follows Nexus as he struggles with his task and tries to balance it with a real life. In addition to Nexus, Rude became much beloved for work at both Marvel and DC, as well as a one-shot starring Space Ghost, published by Comico, and still one of my favorite comics of all time. In my closet, I have an original Space Ghost drawing by the Dude.

If this is news to you, if you previously had no idea who Steve Rude is, you may have a hard time getting to the more joyous points of the Steve Rude story if you take Rude Dude out for a spin. Ian Fischer's biographical documentary suffers from a bit of structural folly in that it takes half an hour to finally dig in to the artist's respected comics career. Instead Fischer frontloads his film with extended testimonials about Rude's struggles with depression and his bipolar disorder--all important to the man's story, to be sure, but Fischer's decision to show all of this up front tends to suggest that it was more important to him than really figuring out the artistic personality that lead to so many memorable images.

Honestly, I'm of two minds regarding this approach. On the one hand, I get that Fischer didn't want to sucker punch his audience by making them intrigued about the central figure only to pull the rug out and let us know that he has gone through some dark times since his heyday. On the other hand, his frontloading of the more contentious aspects of Rude's personality creates an unfair bias, so that by the time Rude Dude finally starts examining his accomplishments, the art is already tainted by prejudice and all we can do is wait for the other shoe to drop. Rude Dude is a 90-minute documentary that leads with a half-hour preamble that lays out Steve Rude's mental struggle, sandwiching the man's history into a half-hour segment in the center of the narrative, before capping it off with the "here is where it all went wrong" half-hour, as Rude struggles to move from comics into fine art while (coincidentally?) his demons catch up with him. Rude has struggled over the last seven or eight years--some of it could be chalked up to simple arrogance, while other behaviors seem to clearly indicate mental illness. (One scene sees him picketing a psychiatrist's office after he deems her ill equipped for her job; he also regularly labels the world as being full of "idiots.") Steve and his wife, Jaynelle, are candid about everything they have gone through. Fischer is not pulling a rope-a-dope and revealing things they thought would stay private; the couple participates.

The problem is that the way Rude Dude is put together, we aren't really given much insight into Steve's struggles. Instead of establishing the artist's many successes and then easing us into the difficulties that undermined them, Fischer flips a switch from one to the other without ever drawing any connection to how maybe Rude's afflictions drive him or how they have otherwise affected the work, good or bad. Nor are we really given much sense of closure regarding the potential dangers Rude poses to himself and those around him. For as open as everyone is, the interviews never lead them toward any revelations or insights. Rude Dude shows the two poles of bipolar rather literally: it's good and it's bad and there is no real sense of an in between.

Which is disappointing. The footage appears to be there, and maybe someone else could go in and edit it properly--Fischer directed, filmed, edited, produced, and provided visual effects, so it might be a case of one guy biting off more than he can chew. Comic book fans might still enjoy Rude Dude, if only to hear of the creative heights Steve hit, or to see other noted comics artists like Alex Ross, Adam Hughes, Michael Allred, Joe Kelly, Paul Pope, and many others, discuss their admiration of his work and their shared history. There are also great photos from comic book conventions past, as well as plenty of reference pictures and pieces from Steve's archives. You may consider skipping 30 minutes in and maybe only backtracking to watch the opening half hour after you've made your way through the rest. 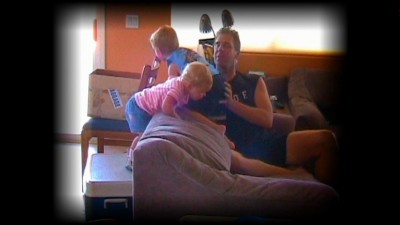 Video/Sound:
Ian Fischer appears to have self-released Rude Dude, as the edition we received features a fairly rudimentary package with a blue-backed disc. If one were remotely conflicted about what the movie's central thrust really was, the cover image is of Rude's character Nexus staring at a laser pistol, seemingly contemplating suicide, while the back cover is the reference photo the artist took of himself before making the painting. Make no mistake, this is not light fare.

The digital transfer of the film is fine, with a widescreen image that is clear with decent resolution and only the occasional shimmer or jagged edges that are often evident in digital filmmaking.

The soundtrack also sounds fine with no distortion or dropouts. The main audio is a 2.0 stereo track.

Note that there are no chapter stops to jump through. 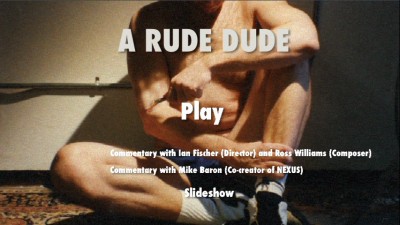 Extras:
In addition to an eight-minute slide show displaying Rude's art and process (which playsi immediately after the film, or can be selected separately), there are two audio commentaries: one by Fischer and composer Ross Williams, and the other with Rude's main collaborator, Mike Baron. The director's commentary can be illuminating, as Fischer reveals the ups and downs he went through to keep his subject from bolting, gives insight into individual scenes, and also relates how the narrative would twist on him. Fischer has clearly become exasperated with his subject.

Baron's commentary is a lot more touch and go, as through much of it, he isn't really part of the story himself, and so tends to describe what he's seeing onscreen. At times when either commentary goes silent, there is no underlying audio, the main track is gone, which can really slow things down.

Reading online about the release (check Rude Dude's Facebook page, for instance), it appears other extras, including extended interviews and an art tutorial, may be available for paid download.

FINAL THOUGHTS:
Rent It. There is about 2/3 of a good movie here. With an alternate edit and a tighter focus, Rude Dude could be a rather fascinating exploration of the artistic mind and the effects of mental illness on the same, while also giving the spotlight to a most deserving subject. Steve Rude, a.k.a. the Dude, is one of the most influential comics artists of the late 20th Century and his Nexus serial a true gem of 1980s creator-owned comics. It's cool to see his work and his technique celebrated; it's sad to see him go through difficult days, be they from his own making or circumstances beyond his control. Rude Dude struggles to mix these two sides, and indeed seems more intent on pushing the harder stuff than it does finding a way to show how it all intersects. A nearly missed opportunity. 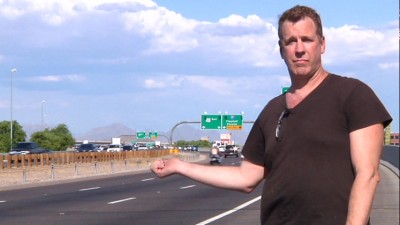