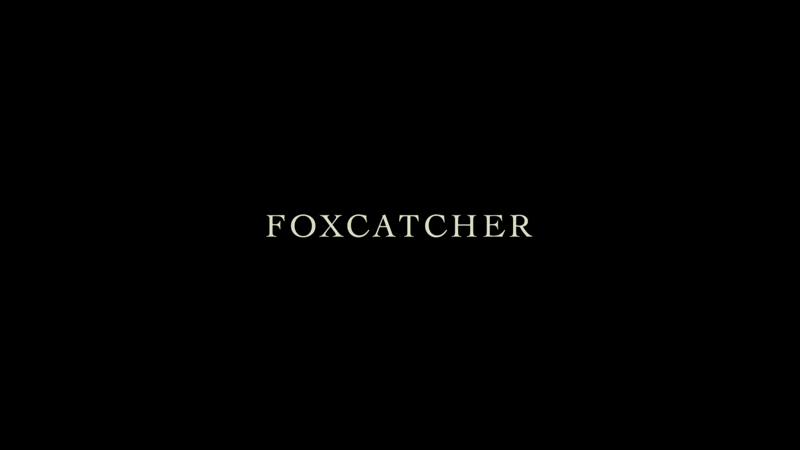 
The Movie
Despite getting something of a late start on his directing career, Bennett Miller has been in no rush to fill up his IMDB entry, directing just three films in 10 years, all of which garnered multiple Oscar nominations. The latest, Foxcatcher shares a great deal in common with his debut, Capote, even if the lead characters couldn't be more disparate. Once again, Miller has shown a mastery for illustrating real life via the heightened reality of film, and though Foxcatcher pushes closer to poetic license than his other films, it's just as fascinating and affecting in portraying a story of people straining against expectations, both internal and external.

The film is mainly the story of three men, Mark and David Schultz, amateur wrestling greats of the 1908s, and their patron, John du Pont, heir to the du Pont chemical fortune. Taken with the sport of wrestling and driven by patriotism, du Pont throws his considerable wealth behind Team USA wrestling, hiring Mark to train a team of elite wrestlers for Olympic glory and establishing a world-class training center on the grounds of his Pennsylvania estate, Foxcatcher Farms. Quickly however, a picture begins to emerge of an obsessed, less-giving du Pont as a bond grows and tears between Mark and John. 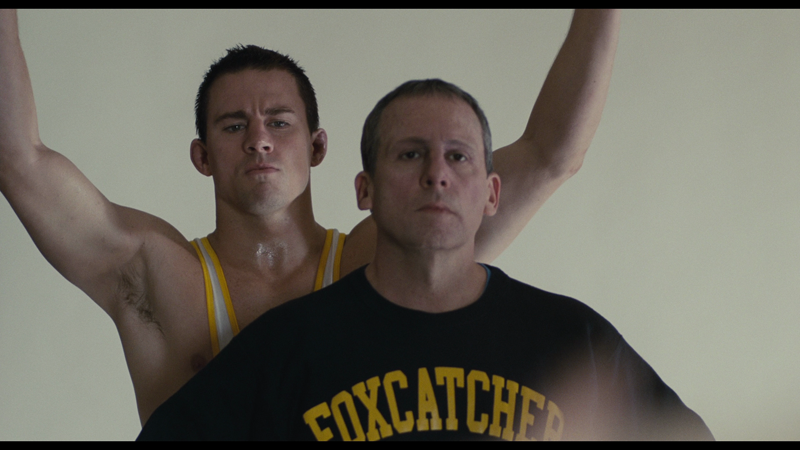 If you don't know how this story ended in real life, don't ruin it for yourself by looking it up, as the film hews closely to fact in that regard, but the portrayal of du Pont by Steve Carell will tell you a lot of what you will learn about the character. Cartoony in a way, with a voice that's a bit exaggerated, Carell captures the awkward demeanor that defined du Pont, but he turns him into such a creepy character that it's impossible to be surprised when things don't work out well for the Schultzes. That's a shame, as people had to battle their instincts in trusting du Pont in reality. Playing him a bit less stiff and a bit more human would have made his increasingly odd behavior far more interesting and far less predictable.

That becomes completely obvious when you watch Channing Tatum as Mark, an outstanding performance that constantly surprises. In seeing the simple innocence Tatum exudes, it becomes easy to believe how he could be taken in by du Pont and his luxuriant lifestyle. But simmering beneath the surface… that's where Tatum shines and where the movie is at its most alive. Foxcatcher is never more powerful than when Tatum and Carell share the screen, with both men delivering internal combustion. The triangle is complete with the addition of the great Mark Ruffalo as Mark's brother David, who mistrusts du Pont and looks out for his little brother. David isn't as juicy a role as those of Tatum and Carell, but the energy between Ruffalo and Tatum is sublimely visceral, especially when they are on the mat sparring. There's not really a film without du Pont, but this is a story about brothers.

Miller works with seeming precision, and every frame feels meticulously structured, even when it's filled with grappling action rather than, for instance, a stunning fall landscape. His willingness to let the camera just run, allowing the viewer to soak in a visual or a moment, shows the power of patience, and the results are full of emotion. A long-range shot of Tatum in the woods with field glasses expresses the idea of observation brilliantly and wordlessly, while the iconic shot of du Pont entering his gym in the foreground, revealing the gun in his hand at his side, is chilling. There are moments like this throughout the film, the work of a seasoned pro who's not afraid of silence and embraces the static, putting both to work efficiently. 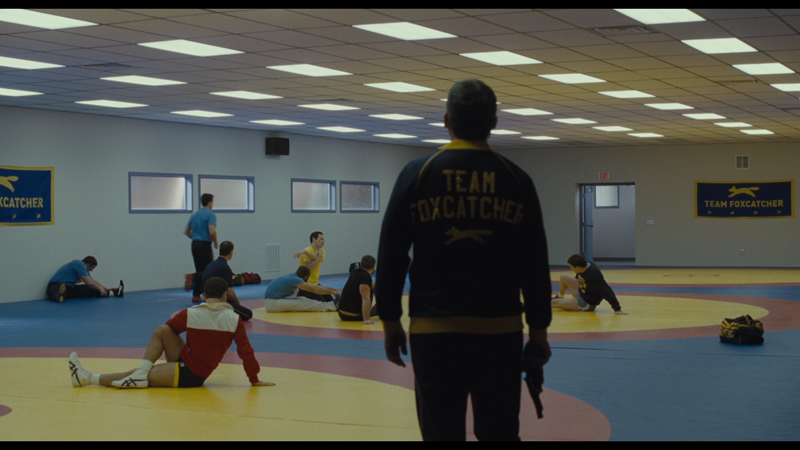 The Disc
Foxcatcher arrives on one Blu-ray, packed into a standard Blu-ray keepcase, which is inside a pointless slipcover that repeats the cover art. A static menu offers a choice to watch the film, select scenes, adjust the set-up and check out the special features. Audio options include English and French 5.1 DTS-HD Master Audio and an English 5.1 Audio Description Track, while English, English SDH, Spanish and French subtitles are available.

The Quality
The 1080p, AVC-encoded transfer here isn't super sharp, thanks to the style Miller employees in capturing his scenes, but the level of fine details hits major heights when allowed, as when the camera lingers in close-up on Tatum's face or catches the sheen of a wrestling singlet. Sticking with the true-life feel of the film. colors are appropriate, leaning toward the well-saturated yet dignified, rather than eye-popping, with even the red of Tatum's wrestling uniform not burning too bright, while the skintones are continuously solid. Overall, the presentation is clean, crisp and lacking in any real concerns about digital distractions.

The 5.1 DTS-HD Master Audio track reveals a film that goes in many directions aurally, but for the most part it's about clear dialogue in the center channel and an engaging, if sparse score that gets support in the surrounds. But throughout there are moments that jump out, like a blast of David Bowie in one celebratory scene, birds flying, the sounds of a wrestling gym and the power of a pistol ringing out. The low-end doesn't have a tremendous amount of work, but it does the trick when called upon, just like the mixing, which includes a few moments of nice positioning..

The Extras
Continuing the sad trend of prestige films getting subpar releases, Foxcatcher offers precious little in terms of bonus content. At least there's a solid behind-the-scenes featurette, "The Story of Foxcatcher" (16:20), which features interviews with Miller, Carell, Tatum, Ruffalo, several members of the crew and even the real life Mark Schultz and Nancy Schultz. Among the topics covered are the film's long gestation, the casting process, the music, and pretty-much the production effort as a whole, including the Schultzes' participation. It's a fine overview and offers a bit of the connection to the real story for those interested in it.

Also included is a whopping two deleted scenes, running a whopping 5:08 combined. In the first one, David takes a phone call about du Pont, but it's the ending, which comes out of nowhere, that's most interesting. There's also a scene where Mark and Nancy (Sienna Miller) argue about David, but that one's less intriguing.

Wrapping things up, there's the films theatrical trailer (2:20) and an assortment of other previews, as well as an Ultraviolet code. 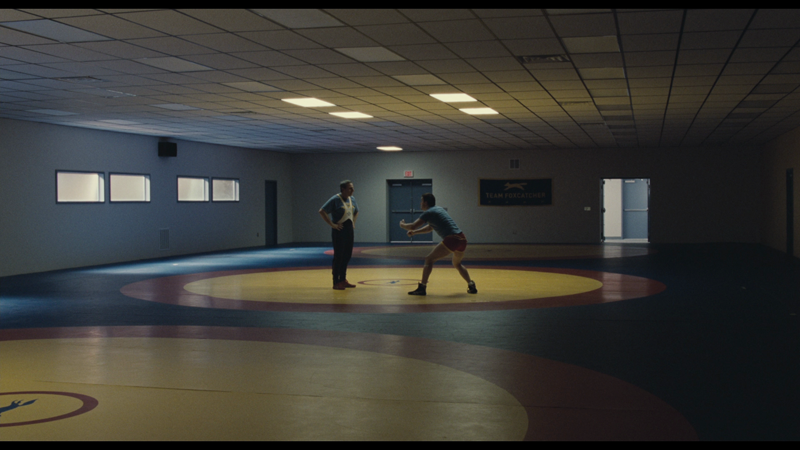 The Bottom Line
It may not all follow the reality, but Foxcatcher is terrifically interesting either way, with a trio of wonderful performers and some fascinating main characters, all under the direction of the masterful Bennett Miller. The only thing that could have made it better would have been dialing down Carell's part a bit. The Blu-ray looks and sounds great, but is distinctly lacking in extras. Unless you're a big fan of the actors or Miller's this edition doesn't scream "own me," but it's well worth checking out.