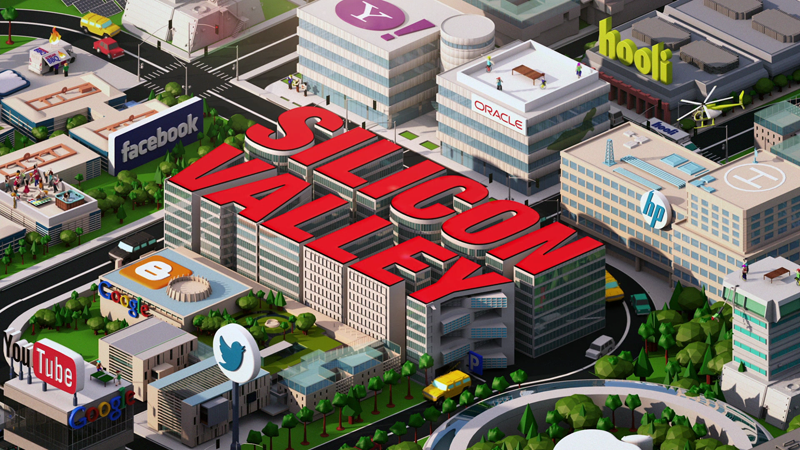 
The Show
Thinking back to the days of Revenge of the Nerds and Real Genius, the idea that young nerds would one day dominate the economy seemed a bit far-fetched. Of course, that was before the widespread adoption of the Internet, and the importance of the web as an integrated part of everyday life. Once that happened, of course the people who understood the code that made everything work would take over. Which leads us to the story at the core of Mike Judge's HBO series Silicon Valley, in which low-level coder Richard (possible Marty Feldman-descendant Thomas Middleditch) in an attempt to create a music search engine, accidentally creates a new compression algorithm that could change the world of technology.

As a result of his discovery, Richard finds himself as a pawn in the power battle between a corporate computing giant, Gavin Belson (Matt Woods) and a huge venture capitalist, Peter Gregory (Christopher Evan Welch). Setting up his own company, Pied Piper, with the team he lives with at a startup incubator run by Ehrlich (T.J. Miller), Richard is thrown head-first into a world of big money, ego and pressure, and he's got to figure it out, including difficulties in managing personal and professional lives and growing up a bit, because Belson's Google-esque company, Hooli, is hot on his heels and could put him out of business before he even gets off the ground.

Though it all sounds pretty dramatic (and the business storyline is legitimately well-plotted and hugely entertaining), Silicon Valley is first and foremost a comedy, and a hilarious one at that. The balance between servicing the season's overarching plot and getting laughs out of the characters' foibles and interactions is just about perfect. Part of that is the fact that this is Mike Judge's baby. The master of business satire, Judge (working with a fantastic team of writers and directors, including Carson Mell, Alec Berg, Maggie Carey and King of the Hill alumni John Altschuler and Dave Krinsky) creates a tech industry that's utterly believable and easily understandable, whether you're a tech insider or an AOL user, and then layers in very human elements that create the comedy, like the constant bickering between coders Gilfoyle (Martin Starr) and Dinesh (Kumail Nanjiani) (maybe the most consistently funny part of the series, outside of sad-sack coder Big Head (Josh Brener) and his failure upward.) 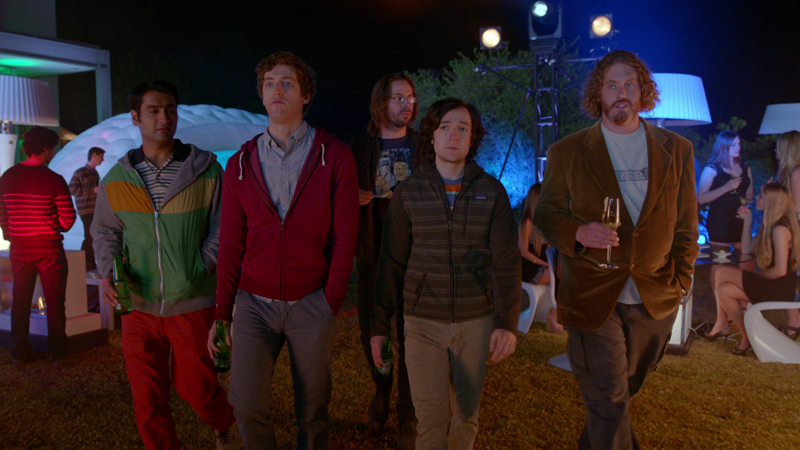 As the star of the show, Middleditch channels the awkward public persona of Mark Zuckerberg while adding a more human side that makes his nerd easier to cheer for. That's important, since this is not the story of an industry titan. Richard is very much floating along, unsure and somewhat directionless, very much subject to outside forces, and his colleagues are not much help outside of the uber-competent Jared (Zach Woods, playing Zach Woods' usual character), but he may be the most personally damaged of them all (as evidenced by a glorious late-season spiral downward.) Social graces are mostly missing in this world, even with big shots Belson and Gregory, who share one of the most brilliantly cringeworthy bouts of small-talk ever filmed. Welch unfortunately passed before getting to give us more of his exquisite creation, but he certainly went out on top with his performance here, particularly in regards to his obsession with Burger King in the third episode.

The interplay between the characters is rather stunning in its development for a series in its first season, whether it's the strange symbiotic relationship between Richard and Ehrlich (which allows Miller to do the best work of his career), the adversarial/friendly connection between the wonderful Nanjiani and Starr, or even the show's one true stab at romance, between Richard and Gregory's trusted employee Monica (non-nerd Amanda Crew, who, like all of the small circle of women in the series, managed to avoid nudity, despite being on HBO.) The show as a whole seems incredibly polished, right down to the pacing, with the season's biggest laugh coming with the season's climax, in a moment that should be enshrined in some sort of comedy hall of fame for managing to be organic, smart and hilarious, while also being simply filthy. 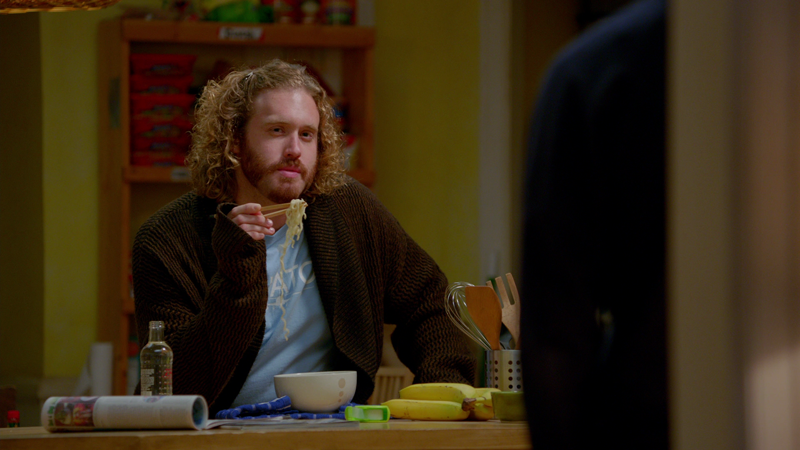 The Discs
The first season of Silicon Valley arrives on two Blu-ray discs, packed into a dual-hubbed Blu-ray keepcase, which comes in a slipcover that repeats the cover art. Clips from the show play behind a menu that offers a choice to watch the film, select scenes, adjust the set-up and check out the special features. Audio options include English 5.1 DTS-HD Master Audio, French and German 5.1 DTS Digital Surround and Spanish 2.0 DTS Digital Surround tracks, while subtitles are available in English SDH, French, Spanish, German, Danish, Swedish, Norwegian and Finnish.

The Quality
Like they say, this isn't TV, it's HBO. So this sitcom looks nothing like the stuff you're getting on the networks. The 1080p, AVC-encoded transfer boasts a tremendously high level of fine detail, appropriate color, including great skin tone reproduction and solid, deep black levels. Whether it a glitchy holographic rendering of one of the characters, a lighting-heavy stage presentation or just a man trapped in a car heading off to nowhere, the presentation handles everything the show hands it with ease. Digital distractions are not a concern either.

The 5.1 DTS-HD Master Audio track is as good as the show probably allows, as there's not a lot of action in a series about a bunch of programmers, where dialogue is the order of the day. That dialogue however is crisp and clear, with quality separation from the show's music. The surrounds don't get a great deal of work, responsible mainly for atmospheric effects, particularly in larger scenes, like any big-audience tech presentation, while the low-end is limited mostly to some music cues, like Judge's predilection for gangsta rap. Nothing to complain about here.

The Extras
The biggest extra is in the form of eight audio commentaries, one for each episode. Judge us on hand for every track, joined by a rotating mix of cast and crew, including Miller, Woods, Middleditch, Starr, Nanjiani and Berg. The tracks are great fun, covering a wide variety of topics, including homoerotic games played on the set, product-placement confusion, the The Price is Right line of comedy, influences on the story, improv, CG work and the reality of the tech content. The only downside to these enjoyable track is the frequent mention of deleted scenes that are nowhere to be found in this set. Boo.

"Making Silicon Valley" (12:32) is a solid overview of the series' production, featuring behind-the-scenes footage and interviews, with Starr and Nanjiani smartly paired for their sit-downs. Among the topics discussed are the differences between geeks and nerds, the comedy of technology and the realism of the series. There's some minor overlap with the commentaries, but it's a quality entry nonetheless.

One of the season's major settings gets the spotlight in the relatively brief "TechCruch: Disrupt" (3:42), which shows how the show faked the big funding competition, with a focus on the challenge of clearing fake start-up company names, the real companies that were involved and the lengths the production went to capture the same feel, including getting TechCrunch personnel involved to consult.

The final featurette is a 6:18 tour of the house where Pied Piper is headquartered, "The Hacker Hostel." This look around includes appearances by Miller, Starr, Woods, Nanjiani and Middleditch, and is further evidence of how funny this cast is, in addition to being a look at the show's set design, with a chance to check out their home in more detail. 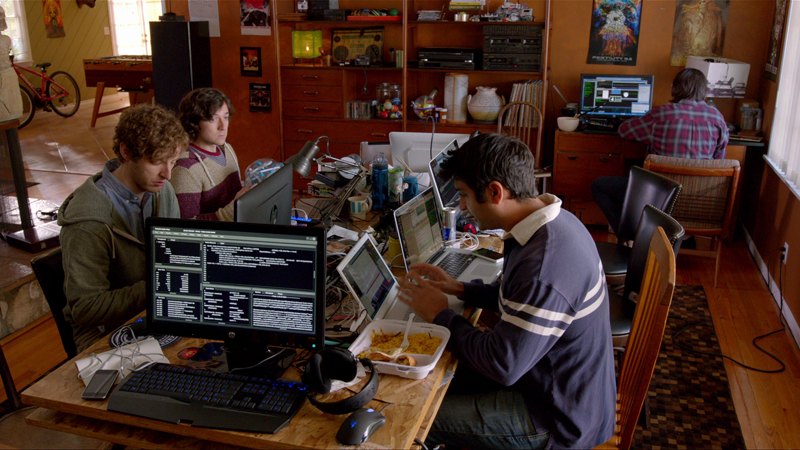 The Bottom Line
The latest in Mike Judge's run of fantastic business satires, Silicon Valley might be the best one in the bunch, aided by the time made available for story and jokes by spreading the story over eight series. The Blu-Ray release looks and sounds great and has some entertaining extras, highlighted by eight fun, cast-filled commentaries. If you like your comedy smart yet silly, Silicon Valley is a wonderful way to get it.