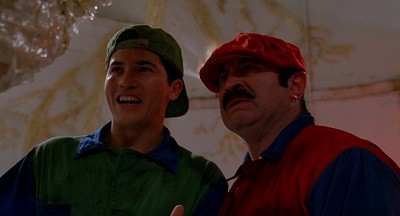 Given the number of comic books, toys, board games, card games, and TV shows currently being made into movies, it may shock some of you to know that in the distant era of the early '90s, it wasn't that common to adapt properties from other media. Books have always been the exception, although at the time it was adult thrillers (Michael Crichton and John Grisham), rather than YA fantasy and sci-fi novels. Super Mario Bros. holds the distinction of being the first feature adaptation of a video game, and the less impressive honor of being a total financial and critical disaster. Its failure gave video game movies a bad reputation, one which, frankly, they have yet to shake. The trainwreck label isn't entirely unearned, but as a cultural artifact, the movie is kind of delightful, an aggressively imaginative hodgepodge of ideas that stray far from the source material.

The obvious roadblock in adapting Super Mario Bros. into a movie is that the game doesn't have a story beyond "plumber rescues princess from giant lizard." For some reason, producer Roland Joffe (The Killing Fields) wasn't interested in a straightforward fantasy universe matching the game, but instead chose a pitch by "Max Headroom" creators Rocky Morton and Annabel Jankel, who envisioned an alternate dimension where dinosaurs evolved into humans, formed by the impact of the meteor we believed wiped them all out. Mario Mario (Bob Hoskins) and his adopted brother Luigi Mario (John Leguizamo) are nursing their wounds from another lost plumbing job when they run into Daisy (Samantha Mathis), a young woman working on a paleontology dig in the middle of Brooklyn. They've only known her a few hours before she's kidnapped by Iggy (Fisher Stevens) and Spike (Richard Edson) under orders from King Koopa (Dennis Hopper), who hopes that Daisy, a princess in the dinosaur world, has the key to re-merging the dinosaur and human dimensions: a missing shard of that meteor. Luigi, already smitten, dives through an interdimensional portal in order to rescue her, and Mario reluctantly goes along for the ride.

The main problem with Super Mario Bros. is that explaining all of this is not particularly simple, nor does much of it make much sense (there's also a secondary thread about the old king having been de-evolved into a fungus that hangs over the alternate dimension city of Dinohattan). Since the vast majority of the film's intended audience was children, the solution is to have the film's extensive cast of characters spend most of the movie explaining these plot points, over and over, despite those very details being illustrated on screen. Worse, the screenplay was reportedly being revised on-set on a daily basis, in a futile attempt to clean up both the concept and a number of conflicting drafts, and it feels as if a good portion of the script's personality bled out in the process. At one particularly embarrassing moment, Hoskins and Leguizamo just yell plot points at one another ("Police! Goombas! Daisy! The rock! The tower!") for no apparent reason. 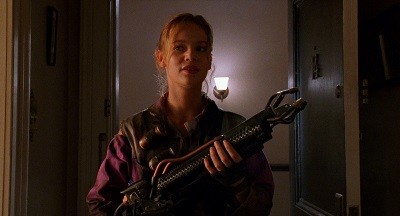 That said, despite the rewrites, directors who reportedly fought throughout an overlong production, and a set of actors who eventually gave up trying to get a bead on plot points and characters that were constantly changing, the execution of the material is fairly decent. Hoskins, who later told interviewers that making Mario Bros. was the worst experience of his career, never once lets on that he's miserable, imbuing every line reading with the New York attitude of his character. At his side, Leguizamo crackles with brash comic energy, and the two have excellent brotherly chemistry that elevates mediocre material. Stevens and Edson do the same, having fun with a dimwit two-man routine that later turns into a genius two-man routine when Koopa evolves them into smarter stooges. The film also reinvents Toad as a goofy, hippie street musician (Mojo Nixon), who adds to the film's unique vibe before being transformed into a Goomba. Hopper goes full ham, frequently holding his hands in front of him like a T-rex and imbuing his dialogue with a slippery, lizard-like quality. Mathis is the only weak link, although her shortcomings have more to do with her character being blandly passive than her performance. Dana Kaminski, as Mario's girlfriend, makes more of an impression.

It's fair to say that Morton and Jankel's Dinohattan doesn't stray too far from dystopias like Blade Runner (in fact, production designer David L. Snyder worked on both films), but there's something infectious about seeing filmmakers allowed to reinvent source material with such wild abandon. The Goombas are no longer mushrooms but gigantic lizard men decked out in burgundy war regalia. Snyder embraces the industrial look of the film's real-life shooting locale (a cement factory) with metal walkways, dangling power cords, and neon lighting curling around gray concrete pillars. Even the Koopahari desert is filled with strange, anonymous men in hazmat-style suits driving "sludge tankers" filled with garbage bags. All of these settings are also draped in the fungus, a string-cheese-like substance that occasionally offers power-ups to the heroes, including the iconic Bob-omb. A fun score by Alan Silvestri adds another layer of cohesion. The Super Mario Bros. movie may not be a good adaptation of the video game, or even a very good movie, but it's certainly a memorable one, an ambitious failure that's far more inventive and interesting than 10 more faithful failed video game adaptations.

The Blu-ray
Second Sight provided a check disc for the purposes of review. The content on the disc is identical to the released product but the packaging wasn't included. 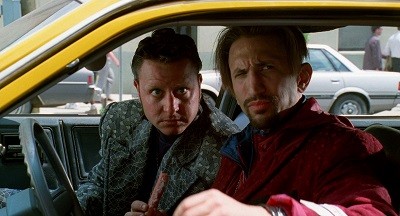 The Video and Audio
Presented in 1.85:1 1080p AVC, it's kind of ridiculous how great Super Mario Bros. looks on Second Sight's new disc. Although there is no mention of it on the distributor's website, I'm guessing the movie has been re-scanned from the original negative, as this presentation offers a level of clarity that probably wasn't even seen when the movie was in theaters. The colors, in particular, are really eye-popping, bringing both the wild visual details of Dinohattan and the natural appearance of Manhattan to life in equal measure. There is a sheen of film grain throughout the presentation, and an extremely negligible amount of compression artifacts are invisible in motion. The only US home video release has been a non-anamorphic DVD with baked-in edge enhancement, minimal detail, and a drab color scheme (I have no idea what other regions got for DVD, if anything). To see it restored on this new Blu-ray is an entirely new experience, one that may prompt spins in the player just to delight in how good it looks. Earns an import recommendation for fans of the film on the strength of the transfer alone.

Sound is included in both DTS-HD Master Audio 5.1 and LPCM 2.0. Most of my viewings of Super Mario Bros. were from when I was younger, and I never noticed quite how lively the soundtrack is. The messy mechanical nature of Dinohattan provides a constant backdrop of sparks, gears, and strange noises, and the movie is packed with action scenes filled with fireballs and de-evolution guns. Flipping back and forth between the two tracks, the difference in the quality of the elements is almost non-existent, and the 5.1 mix isn't quite as expansive as a new movie might've been, but I give the full surround remix a slight edge, with just a bit more depth and immersiveness during big sequences. Both tracks sound really great, however, and it's especially nice to know that both options are available. English captions for the deaf and hard of hearing are also included.

For even more screencaps, just click on these links.

The Extras
The centerpiece of the disc is an all-new hour-long making-of documentary, "This Ain't No Video Game" (55:49, HD). Featuring interviews with Roland Joffe, Jake Eberts, Parker Bennett, John Leguizamo, Richard Edson, and more, this is a delightful retrospective that doesn't shy away from the film's tumultuous production. All involve speak candidly about their experiences working on the film, from the purchase of the rights from Nintendo through to the slow resurrection of the film as a cult favorite, touching on the extensive production design, the many rewrites (screenwriter Parker Bennett's stories are especially ridiculous), and the punishing experience of acting on the film. Everyone is in good spirits and good humor, keeping the documentary light and enjoyable while admitting to some of the film's problems. Among the best retrospective documentaries I've seen all year.

The new doc is supported by two vintage featurettes. "The Making of Super Mario Bros." (17:32, SD) is a clip-heavy overview of production, in which Bob Hoskins masks his bitterness with a thin veneer of sarcasm, and the "interview" with Dennis Hopper consists of him introducing himself. Features some really fun footage of the Goomba animatronics, and a couple of the snippets were actually deleted from the film. The other is the complete electronic press kit (30:05, SD) provided to media outlets and TV studios to promote the movie. It's pretty much skippable, consisting of a shorter version of the previous featurette, clips from the film, and the trailer. The one section of some interest is the B-roll, although much of it is used in the other featurette. 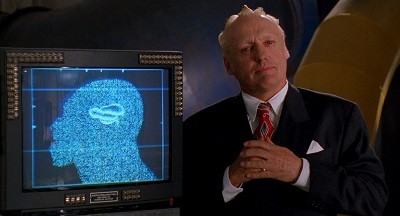 The rest of the disc is made up of image galleries. Four chunks of storyboards are included, including one for an alternate ending, clearly from a much different version of the film, which takes place on the World Trade Center and across the Brooklyn Bridge. This is followed by a series of eight photo galleries packed to the brim with behind-the-scenes looks at the various makeup effects and sets, which are rife with all sorts of details that can only be glimpsed or aren't visible at all in the finished film. Some of the photos are more generic stills, but it's worth flipping through them, which is more than can be said for most photo galleries.

Conclusion
The final nail in Super Mario Bros.' coffin was its release date, opening just a two weeks before another dinosaur-themed movie, Jurassic Park. For some films, that would be the end, but it's hard to deny that the film is so bizarre, it was primed for cult status from the get-go. This new Blu-ray is one of the best releases of the year, featuring a stunning new transfer (better than a depressing number of all-time classics), and a hugely enjoyable new making-of documentary. Fans in the US may be disappointed the disc is locked to Region B, but anyone with a compatible player who enjoys the movie should not hesitate to pick up a copy. Highly recommended.

Note: This review would not have been possible without the support of friends at the Super Mario Bros. Movie Archive, who were instrumental in the creation of the supplementary material on the disc, and helped put me in touch with Second Sight.