Olive Films // Unrated // February 17, 2015
List Price: $29.95 [Buy now and save at Amazon]
Review by Stuart Galbraith IV | posted February 25, 2015 | E-mail the Author
Billy Wilder's Kiss Me, Stupid (1964) was quite scandalous in its day. It was condemned by the Catholic Legion of Decency*, and co-producer/distributor United Artists chose to slip it under the radar through subsidiary Lopert Films, which specialized in foreign films and disreputable B-movies. The ending was substantially altered for the American market, and a few other, minor trims were made as well.

People still use adjectives like "vulgar," "smutty," and "sleazy" to describe it, though content-wise there's nothing in it that couldn't play on commercial television in the middle of the afternoon. Rather, fifty years on, Kiss Me, Stupid seems more impressive, more adult, more darkly witty than ever. It's the missing link between Wilder's The Apartment (1960) and his brilliant, criminally underrated Avanti! (1972). And while the more conservative, sentimental The Apartment (1960) gets all the love, Kiss Me, Stupid is in many respects a superior picture, despite a major casting problem about more of which later. (It obliterates Wilder's earlier, very tame, and boring "classic" covering similar territory, 1955's The Seven Year Itch.)

Despite zero extra features (Why?), Olive Films' Blu-ray of Kiss Me, Stupid is one of the best releases this year. The high-def transfer is very nearly perfect, light years ahead of MGM's earlier DVD. Further, it not only includes Wilder's original, preferred ending, but also three recently recovered bits originally included only in the international version. 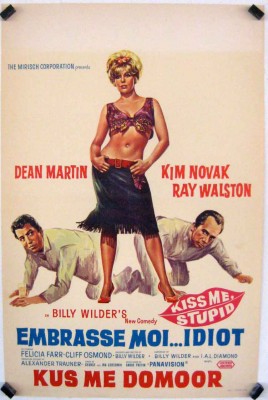 Famous crooner Dino (Dean Martin, essentially playing a lecherous extreme of his established screen persona), following a closing night performance at the Sands in Las Vegas, hops aboard his Dual-Ghia convertible and heads toward Los Angeles, where he's scheduled to headline a TV special.

A detour mandated by the Highway Patrol ("Whatsamatta," asks Dino, "That Sinatra kid missing again?") takes him off the beaten path to Climax, Nevada, where he's recognized by gas station attendant Barney Millsap (Cliff Osmond), the lyricist half of an amateur songwriting team. His partner is local piano teacher Orville J. Spooner (Ray Walston), the chronically, insanely jealous husband of attractive but loyal Zelda (Felicia Farr), who on this very day is making preparations to celebrate the couple's Fifth Wedding Anniversary.

Barney disables Dino's car so that he's forced to remain in the small desert town overnight, time enough, Barney hopes, to persuade Dino to buy some of his and Orville's songs. ("That's Amore," exclaims Barney, "Two million copies!") Orville, however, is deeply concerned randy Dino will put the make on Zelda. Barney hatches a plan worthy of Ralph Kramden: Orville will pick a fight with Zelda, get her out of the house, and replace her with another Zelda, impersonated by local waitress/prostitute Polly the Pistol (Kim Novak, very sexy). That way no harm, no foul: Dino can have his way with Orville's "wife" and, in turn, be compelled to buy one of Barney and Orville's songs.

Kiss Me, Stupid was a troubled production. Wilder and co-writer I.A.L. Diamond conceived the role of Orville Spooner with Jack Lemmon (Felicia Farr's real-life husband) in mind, but Lemmon was unavailable. Wilder then cast rising British talent Peter Sellers and the movie began shooting. A full six weeks into filming (probably around half or two-thirds of the picture) Sellers, in search of the "ultimate orgasm" with new wife Britt Ekland, took a bunch of poppers and, over the course of three hours, suffered eight (!) heart attacks. Rather than wait many months in the hope that Sellers would recover, Wilder started over from scratch with Ray Walston (Damn Yankees, South Pacific) now playing Orville. Myriad stills exist of Sellers as Orville but apparently all of the footage Wilder shot with Sellers was destroyed. (People at MGM have searched for any surviving material, to no avail.)

Though it would certainly be fascinating to see how Sellers's interpretation of Orville differed from Walston's, the more critical question is how Jack Lemmon might have played him. Based on Lemmon's work on other Wilder films before and after, probably his Orville would have been less broadly the caricature of a jealous husband. Lemmon's would have been supremely neurotic and excitable, but also more recognizably human and sympathetic. Add to that, Lemmon was an accomplished pianist (Walston's playing was faked) and, of course, because he was married to Farr that relationship would have benefitted from that additional layer of verisimilitude.

Walston, while technically fine, is a like a road company version of the character. This is especially obvious in all his early scenes, where he's merely the insanely jealous husband with no shading. Physically, too, Walston was all wrong. Small and wiry, Walston had beady, steely little eyes and projected an overbearing air of domination, a little guy compensating for his size by acting like a bully who knew everyone's weaknesses. This was ideal for his role as one of Lemmon's superiors in The Apartment but entirely wrong for Kiss Me, Stupid. (Among past and future Wilder players that would have seemed more obvious third choices: Fred MacMurray, Walter Matthau, and, against type, Tony Curtis.)

And yet, the brilliance of Wilder and Diamond's screenplay eventually trumps this shortfall. Kiss Me, Stupid gradually works up a lot of steam, moving in unexpected directions that compensate for Walston's limitations while playing to some of his strengths.

Sublimely, though Orville is all but pimping out his wife (actually Polly), the two develop a strangely touching relationship amidst Dino's openly amorous advances. Polly discovers that she enjoys living, if only temporarily, as an ordinary housewife, and she's genuinely touched by Orville's involuntary, instinctive need to protect his "wife," even if she really isn't. Orville and Polly hilariously send Dino wildly mixed signals, making him hornier and more openly lustful while Orville becomes more hesitant and protective.

(Spoilers) The real Zelda, utterly confused by Orville's strange behavior, uncharacteristically picking a fight with her to send her, briefly, home to her "Godzilla" of a mother, winds up in Polly's trailer. Eventually, she embarks on a fully-aware tryst with Dino, he mistaking her for Polly the Pistol. The cut U.S. release version confusingly obscures this, adding a scene to suggest that, no they actually didn't do that, while leaving enough of the original cut in to imply, for those reading between the lines that, yes, in fact they did. But the international cut, seen here, is far superior because, as so often happens in Wilder's comedies, the balance of the universe is fully restored at the end: Dino enjoys sex with Zelda, an ardent fan of the singer. She enjoys the fantasy of being a prostitute for a single night, happily passing along the $500 Dino leaves for her to Polly, who needs the money to get out of the racket. Polly finds the strength to leave Climax through Orville's innate kindnesses, and through vicariously experiencing normal, married life (including sex) with him for a single evening. Barney and Orville even become big-time songwriters at the end.**

All this is both less subtle and more adult and refreshingly direct than The Apartment's quite similar narrative. It's also funnier. It's packed to the gills with subtle, easy-to-miss, but ultimately hilarious double-entendres. When Barney delivers Polly he cautions Orville, "You don't have to start on the piano right away!" Orville, suspecting Zelda is having an affair with the local dentist (Mel Blanc): "'Tender gums!' That's a hell of a thing to say to a married woman." Orville, showing Polly around his house, before she's apprised of the scheme: "It's not large, but it's clean." Polly, confused: "What is?" In the darkened bedroom, Orville to Polly: "Put on my wife's dress - that's the only way this'll work!"

As Polly, Kim Novak is exactly right playing a difficult combination of emotions: vaguely unhappy but not defeated, innocent but worldly. She's every bit as good as Shirley MacLaine in The Apartment, maybe better. Martin, gamely playing an unsavory, ungentlemanly version of his screen persona, is also delightful. Virtually held captive by marginally talented misfits obsessed with latching onto Dino's star, the film parallels in some respects Martin Scorsese's darker but not dissimilar The King of Comedy (1983) which, of course, co-starred Martin's old partner, Jerry Lewis, playing a variation of his persona. In both Kiss Me, Stupid and Wilder's The Fortune Cookie, Cliff Osmond prove himself to be an extremely funny character actor. Why he didn't have a major career in films is as tragic as it is mystifying.

Adding to the film is its music, both the amusing background score by André Previn and the hilarious Tin Pan Alley numbers Barney and Orville have cooked up: "Pretzels in the Moonlight," "Save Me the Last Bossa Nova," "Two Coins in the Fountain," and "Gently Baby, It's Mother's Day" are among the titles glimpsed as sheet music. Incredibly, these were not original compositions but rather previously unpublished songs by George and Ira Gershwin.

Filmed in Panavision and in black-and-white, Olive's HD master of Kiss Me, Stupid, provided by MGM, looks perfect, extraordinarily crisp and film-like throughout, with great blacks and outstanding contrast. It's one of, if not the, best-looking HD transfers of a black-and-white ‘scope film on Blu-ray to date. As noted above, like the earlier DVD it retains the far superior ending from the international version, while adding three short bits (probably totaling less than a minute) elsewhere. DVD Savant's excellent review details these additions. The DTS-HD Master Audio mono (with no other language options or subtitles) is likewise strong. None of the Extra Features created for MGM's earlier DVD release have been ported over, a real shame.

One of Billy Wilder's most overlooked and misunderstood films, Kiss Me, Stupid's reputation has for good reason steadily risen through the years. It's slightly flawed but still hilarious and adult, and Olive's presentation is superb. A DVD Talk Collector Series title.

* Wikipedia's entry on the film claimed it "the first American film to be so designated since Baby Doll in 1956," but that's incorrect. A few others were, including Hitchcock's Psycho (1960) - and two other Wilder films, Love in the Afternoon (until its ending was changed, 1957) and Some Like It Hot (1959).

**The last scene has everyone in town watching Dino's special, huddled on the sidewalk around an appliance store with TVs in its display window. This is pure speculation, but considering that throughout the film the point is made that people explicitly go there to watch the town's only color television set, I suspect Wilder intended to have the black-and-white movie switch to triumphant color at the end, as Dino performs Barney and Orville's song. Instead, despite all that's said about the single color TV earlier, Wilder opted for a dozen or so black-and-white sets in the display window instead.