Beach Blanket Bingo (1965) is the high-water mark, the apex, of American International Pictures' (AIP) "Beach Party" film series. As a drive-in movie craze, it petered out quickly: six, seven, or eight pictures (depending upon how you count them) released, with one exception, over a two-year period, from August 1963 to July 1965.

The movies were Beach Party (1963), Muscle Beach Party, Bikini Beach, Pajama Party (all 1964), Beach Blanket Bingo, and How to Stuff a Wild Bikini (both 1965). Official lists usually include The Ghost in the Invisible Bikini (1966), but nearly all the series' cast is absent from that feeble entry. Ski Party (1965) usually isn't included but it plays a lot more like an "official" Beach Party movie than Ghost in the Invisible Bikini does. A few other AIP films, notably Sergeant Deadhead (1965) and Fireball 500 (1966) also nearly qualify. Most of these star Frankie Avalon and/or Annette Funicello.

Seen today, the Beach Party movies are like quaint, ancient anthropological artifacts of a more innocent age. Admittedly, these kinds of movies demand a non-critical movie-watching adjustment. Though technically comedies, AIP was all thumbs in this department. Accept for special, extended "cameo" appearances by Buster Keaton in some of these films, they're full of broad, labored, and mostly unfunny slapstick done in a manner that makes Gilligan's Island seem extraordinarily sophisticated by comparison. The musical aspects were wildly uneven, too, with great talent like "Little" Stevie Wonder and Dick Dale and the Del-Tones mixing it up with more innocuous, sometimes dubious talent.

But there's also a beguiling sense of fun to these pictures, too: carefree teens surfing and (in Beach Blanket Bingo's case) skydiving, and generally having a blast on the beach. These kids weren't worried about being drafted and shipped off to Vietnam; they weren't experimenting with LSD, or fretting about the Kennedy Assassination or racial strife. And in Beach Blanket Bingo, the closest these teens-in-their-twenties come to strong drink is Coca-Cola.

For decades the only way to see any of the Beach Party movies, all shot in 2.35:1 Panavision, was via terrible, grainy and discolored panned-and-scanned video masters. MGM's earlier DVDs, most of which were 16:9 enhanced, helped a lot, but Olive Films' new Blu-ray of Beach Blanket Bingo, as well as other ‘60s AIP titles released by Olive and a few other labels, are at long last permitting interested parties to see them as they were meant to be seen. Beach Blanket Bingo, at least, sure looks great. 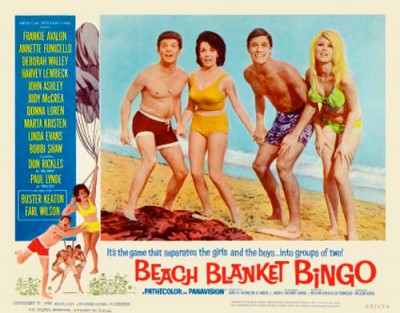 Beach Blanket Bingo follows the usual pattern. In almost every film, normally blissful young couple Frankie (Avalon) and Dee Dee (Funicello) squabbles over something or another. Sometimes Dee Dee becomes jealous when Frankie's wandering eye turns to that film's guest bikini babe, while in other films they clash over traditional male-female roles. In Beach Blanket Bingo both things happen: Dee Dee becomes jealous when Frankie all but salivates over aspiring singing star Sugar Kane (Linda Evans, of TV's Dynasty) and later Dee Dee resents Frankie's chauvinistic attitude when she wants to try skydiving. "A girl's job is in the kitchen," Frankie insists.

The busy plot has Frankie, Dee Dee, and the gang taking lessons from a skydiving service run by Big Drop (Don Rickles), though Steve (John Ashley) and girlfriend Bonnie (Deborah Walley, Ashley's real-life wife at the time) do all the instructing. Bonnie feels neglected by Steve so she tries to make him feel jealous by seducing Frankie, further fueling Dee Dee's anger.

Of course, the plots of these Beach Party movies hardly matter. They're just filler for the songs, romance, adventure, and antics of their multi-generational casts. In Beach Blanket Bingo, semi-regular Don Rickles, for the only time in the series, more or less does a version of his nightclub act, during which he teases Frankie and Annette for playing teenagers at "forty." (They were still in their twenties, though Avalon was already married with the first several of eventually eight children, while Funicello got married around this time.) Buster Keaton shares the screen with bosomy Bobbi Shaw for a series of gags almost certainly staged by the great silent clown himself. In one scene he hilariously tries to dance, only to take a spectacular pratfall, though he was nearly 70 at the time. It's the film's biggest laugh. Paul Lynde and Earl Wilson hang around on the sidelines. When Wilson drags Bullets to one of the kids' hangouts for research Lynde, with signature snarkiness, asks, "Which girl is it, Earl?"

And, as with nearly all the Beach Party movies, Eric Von Zipper and his "sickle" gang, the Rats and Mice, threaten to spoil the "soifers'" fun. Filling the intellectual void vacated by Leo Gorcey, Von Zipper was somebody's idea of a send-up of Marlon Brando's Wild One character. Lembeck, who came into prominence in the stage and movie versions of Stalag 17 before playing straight man to Phil Silvers on Sgt. Bilko, is unpardonably hammy though, given the script, the character hardly requires the finesse of Olivier. But Lembeck was a nearly constant presence in these films, with catch phrases like "Him, I like" and "You stoopids!" while falling off his "sickle." Familiarity, in this case, breeds affection. Tolerance, anyway. Amusingly, Lembeck is paired here for much of the film with wildly eccentric, possibly psychotic actor Timothy Carey, who calls everyone "booby" (or maybe the Yiddish "bubbe") for no clear reason.

Jody MCrea had been a series regular as a particularly dumb comedy relief character. He had been called "Deadhead" in the previous films but was changed to "Bonehead" for Beach Blanket Bingo, apparently to avoid confusion with AIP's Sergeant Deadhead, or something. Kristen and McCrea are sweetly sincere in their mortal-mermaid romance. Their scenes are, almost unaccountably, memorable somehow.

Nancy Sinatra was the original choice for Sugar Kane, but she dropped out, reportedly because the film's kidnapping climax was a little too reminiscent of brother Frank Sinatra, Jr.'s real-life kidnapping in December 1963 - a kidnapping at first wrongly believed to be a publicity stunt along the lines of Bullets's deceptions with Sugar in the movie.

In her place Linda Evans is extraordinarily beautiful (love those dimples!) but not a singer, so Robin Ward/Jackie Ward dubbed her for these scenes, and she isn't so hot, either. But the movie's other numbers are good, particularly the title song, "I Think, You Think" (sung by Frankie and Annette) and semi-regular Donna Loren's "It Only Hurts When I Cry," which became her signature tune.

Olive's HD master of Beach Blanket Bingo, in its original 2.35:1 Panavision format, looks splendid. These cheap (around $350,000) movies sure showed their seams, but they always made decent use of the wide ‘scope format, which proved ruinous when they finally made their way to TV and home video in the decades that followed. Here the image is bright, colorful and it has lots of fine, film-grain detail. The DTS-HD Master Audio mono (with no other language options or subtitles) is likewise strong. The only Extra Feature is a trailer.

The Beach Party movies can be pretty grueling experiences, but if one is in the right receptive mood, the better ones can be enormous fun. Beach Blanket Bingo is marginally the best of the lot, and a welcome addition to Blu-ray. Highly Recommended.