VEI // Unrated // November 4, 2014
List Price: $233.33 [Buy now and save at Amazon]
Review by Stuart Galbraith IV | posted December 29, 2014 | E-mail the Author
Nash Bridges (1996-2001) is a slickly produced police action-melodrama filmed in San Francisco and starring Don Johnson and Cheech Marin. More successful than you might remember, it ran for six seasons on CBS. It might have run even longer, but Paramount, producers of the series, crunched the numbers and decided that its $2 million/episode budget, combined with its backlog of 122 episodes, plenty enough to move it into syndication, didn't warrant another year's worth of shows.

For this reviewer, looking at Nash Bridges turned into something like Buyer's Remorse. The Complete Series sat in our unloved screeners stack for several days and, not having seen the show but curious about it, mainly for Marin's participation, got the better of me. It's not as though Nash Bridges is particularly bad, but very quickly I realized that it was an unexceptional if transitional cop show, bridging the gap between older styles prevalent in the 1970s, ‘80s, and ‘90s, with the modern style of cop series airing now. During it's run, particularly its first year or two, Nash Bridges might have seemed fairly impressive for its kind but, seen today, it's tough sledding, at least for me. Many cop shows from the ‘50s, in some respects, play less dated than this one.

Nash Bridges had been another of those TV shows abandoned by their original home video distributor. Paramount released Season 1 back in 2008, followed by Seasons 2 and 3 in 2009, but then gave up. VEI has combined those releases, apparently identical in terms of transfers and extras, with the remaining three seasons. However, many consumers are reporting playback problems on many of the discs for Seasons 4-6. Of course, no one wants to be bothered with having to spot-check more than a dozen DVDs for defects and yet, so far, there's been no official announcement from the label about replacing those defective discs. 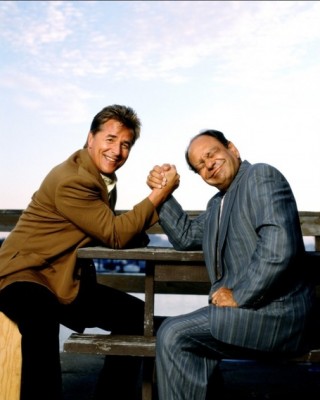 Johnson stars as Nash Bridges' titular character, a police inspector in San Francisco's elite "Special Investigations Unit" (like Law & Order's Special Victims Unit, a convenient catch-all allowing myriad crime story variations that a single unit would never investigate in real life). Nash convinces old pal Joe Dominguez (Marin) to come out of retirement to partner with him. As with most ‘60s-‘70s cop/detective shows, Nash drives a distinctive, attention-grabbing car (hardly ideal for undercover work): a 1971 Plymouth Barracuda convertible in "curious yellow" (of which perhaps as few as 13 were built and thus priceless), and has the usual eclectic assortment of officers and technicians working under him, along with a cantankerous father (character veteran James Gammon) suffering from mild dementia.

Cop/detective shows were fast changing during Nash Bridges' run. Star-driven vehicles like Kojak and Police Story were largely kaput, and the diminishing returns of detective shows spawned by Columbo, series featuring TV veterans like Andy Griffith (Matlock), Dick Van Dyke (Diagnosis Murder) and William Conrad (Jake and the Fatman) were drawing less favorable (i.e., older) demographics. Series like Hill Street Blues (1981-87) and Cagney and Lacey (1982-88), in the gutter ratings-wise but highly regarded by critics and their fans, were pointing the way toward a grittier, more realistic and character-driven style of cop show that blossomed with Homicide: Life on the Streets (1993-99), NYPD Blue (1993-2005), and Law & Order (1990-2010) and its innumerable spinoffs.

Nash Bridges, meanwhile, largely eschews that trend, playing more like a combination of the older, star-driven police procedurals of the ‘70s, coupled with a post-Miami Vice gleam.

Miami Vice (1984-1990) had, of course, starred Don Johnson. Though earlier cop shows occasionally had uniquely striking, visual appeal - Peter Gunn (1958-61) being an early example - Miami Vice may have been the first cop show that truly put style ahead of substance. Miami Vice was, briefly, a pop culture phenomenon because at the time it seemed so hip and modern, a cop show that resembled the latest music videos emanating from the then-equally-hot MTV. It begat the other big trend, toward super-slick, super-hit crime shows that hit their stride with CSI and NCIS, and their myriad spin-offs. (Maybe Miami Vice would have been longer-lasting had it been, simply, MV.)

Nash Bridges is less aggressively stylized and more laid-back generally, but it has a similarly flip, sardonically cool attitude that plays almost quaintly naïve today. But I also found it anything but compelling. I sat there admiring it from a production standpoint - residents of San Francisco must have really hated the inconvenience of having all that traffic constantly blocked off to stage its Bullitt-like car chases - but also instantly forgettable and nutritious as cotton candy.

Nash Bridges is presented in its original 4:3 format and looks pretty good overall: the show was filmed in 35mm and the transfers are, while not great, reasonably clean and clear. It's a 27-DVD set, with the discs subdivided by season with matching VEI packaging. The audio, Dolby Digital Stereo, is pretty good for what it is and supported by closed-captioning. According to the packaging, some music heard in the broadcast (and, presumably, syndicated) version has been changed for the DVD release, while others "may be edited from their original network versions," though what these edits might consist of is unknown to this reviewer.

As noted above, some consumers are experiencing playback problems on some of the later-seasons discs, which are all Region 1 encoded.

Supplements from the original Seasons 1 and 2 sets have been recycled here: Interviews and audio commentaries with Johnson and Marin; a "Writers Roundtable" for the first two seasons, and a Season 1 promo.

Nash Bridges has its fans and more power to them, but I found the show polished if undistinguished, a melting pot of genre clichés and routines plots, populated with characters of little interest. Rent It.