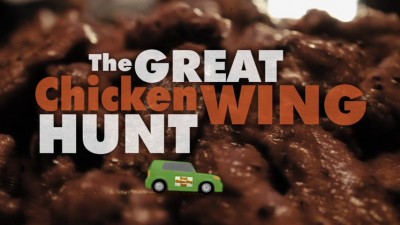 
The Movie
The Guy Fieri-zation of food television has brought on a wave of shows focused on the personality of the host, which have only served to stand as proof of the quality of shows that remain centered on the food and the people who prepare it. A good story is a good story, and no amount of "donkey sauce" is going to change that. That's why The Great Chicken Wing Hunt works as a documentary. There's so much story going on, the wings almost have to battle for screentime (in a film that checks in at a very lean 71 minutes.)

A native of upstate New York, the home region of the classic Buffalo wing, Matt Reynolds loves the spicy little morsels so much that he decides to give up his job as a journalist in Slovakia, and brings his girlfriend Lucie, and a team of Slovakians he's introduced to the foreign wings, to America, to find the perfect Buffalo wing. Working off online tips and the guidance of a judging panel made up of wing aficionados, Reynolds and company travel "the Wing Belt" (essentially New York) to track down the best version of the football-watching accompaniment. Using a scientifically-designed scoring system, his squad of experts eats wings non-stop from New York City to Buffalo, until a winner is chosen. 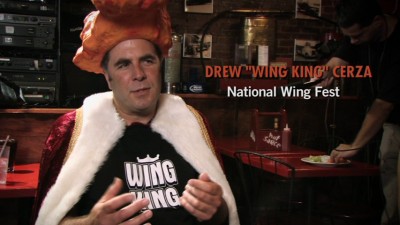 What separates this from the average episode of Best in Chow, is the number of subplots, including the friction between the judges, a unique assortment of personalities who have their own view on what makes a good Buffalo wing (or simply what makes a Buffalo wing at all), Reynold's personal obsessions and the perspective of the Slovakians on this very American quest, including that of Lucie, who is along for the ride with the man she loves, even if she doesn't quite understand the point. There's also a bit of an undercurrent to the film that peeks at what these wings mean to the identity of a region that's experienced a great deal of struggle economically in recent decades.

Of course, the wings are the core of the story, and besides making one want to go out and enjoy copious amounts of them, the film does tell a well-paced story about the hunt, dipping into the history of the wings and meeting some of the people who make them, while offering a good deal of insight into the judging, including breakdowns of the criteria and reasoned debate over who should win (Reynolds certainly lucked out in finding the people he ended up traveling with.) Though some of the seemingly more interesting elements have been lost for different reasons (see The Extras), there's still a good, entertaining story here, and a fun. fast film built around it that should appeal to anyone who enjoys good tales of American grub. 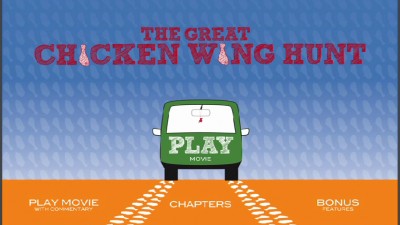 The DVD
Packaged in a standard keepcase The Great Chicken Wing Hunt arrives on a single DVD, which offers a static, anamorphic widescreen menu with options to play the film, select scenes and check out the extras. There are no audio options and no subtitles or closed captioning.

The Quality
The anamorphic widescreen transfer here looks fine, like any good low-budget documentary should, blending a mix of camera qualities into a pleasing picture. Color is solid throughout (check out the hues on those wings) while the level of fine detail is good, and black levels are decent. Night scenes, or low-light interiors, get a bit noisy, but they are still not problematic. There are no concerns about compression artifacts.

The Dolby Digital 2.0 audio track, like the video, is just fine for the material, offering a center-balanced documentary-style presentation that makes everything easy to hear, especially the music from some of the subjects in the film. Sometimes, in some of the busier moments, it can get a bit clumsy sound-wise, but the filmmakers offered burned-in captioning for dialogue that gets jumbled.

The Extras
The main extra is an audio commentary with Reynolds and Lucie and producers Casey Paleos and Bob Geile. Naturally, they recorded it while eating wings and drinking whiskey. The track is friendly and conversational, with Reynolds leading the way, offering background details and notes on the lengthy production and editing process. Lucie, likely due to language difficulties, doesn't say much. The most interesting part is the mention of elements that were left out of the film, apparently for sensitivity reasons (legal or otherwise), but the commentary does round out the story, making for a nice supplement to the film.

Two Q&A sessions are included, one from the 2013 Woodstock Film Festival (11:36), with Reynolds, Lucie and Marshall Grady (one of the chefs in the film), the other from 2014 at the Maysles Cinema in Harlem (18:52), with Reynolds and a Skype-ing Grady. Heavy on questions about the wings themselves (the result of Grady's participation), there are some thoughts shared on the film's themes, as well as the answer to one plot point that goes unresolved in the film.

A short documentary follow-up directed by Reynolds, Matt and Lucie: What Are They Up To Now? (16:54), catches up with the pair, and answers the titular question, which centers mainly around their cultural differences and his attempts to get her to enjoy The Big Lebowski, including a trip to Lebowski Fest New York. Considering how short the main feature is, this is a decent addition to the storyline, but it's not as interesting as the wing hunt.

If you enjoy the music in the film, three acoustic songs by Al Caster are available to listen to: "Wildwood Flowers" (2:04), "The Yellow Rose of Texas" (1:18) and "Black is the Color" (1:31). A soulful singer, Caster's music really is enjoyable, and works well in the movie.

A neat inclusion is an up-close look at the scorecard used in the hunt (1:33), including the instructions on how to fill it out. Also included is an effective 2:02 trailer for the movie. 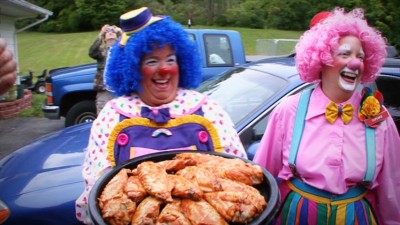 The Bottom Line
Blessed with an engaging group of subjects, Reynolds has pulled together a multi-layered documentary about culture, obsession and, of course, Buffalo wings. Quick and fluff-free, The Great Chicken Wing Hunt gets right down to business and tells an interesting story about one of the few wholly-American foods there is, mixing documentary and drama in the right proportions. The disc looks and sounds good and offers a healthy dose of legitimate complementary materials that make it well worth the bargain price.