Kino // R // April 21, 2015
List Price: $29.95 [Buy now and save at Amazon]
Review by Stuart Galbraith IV | posted April 11, 2015 | E-mail the Author
When I first saw the coming attractions trailer for The Wicked Lady (1983), starring Faye Dunaway, I was slightly confused. It looked like some sort of semi-sequel to Richard Lester's The Three Musketeers (1973), in which Dunaway played the scheming Milady de Winter. The Wicked Lady, despite some resemblance to Lester's film, was not a sequel. It received terrible reviews in America, including a "Razzie" nomination for Dunaway as "Worst Actress," and soon disappeared without a trace.

In fact The Wicked Lady is a remake of a stylish if old-fashioned Gainsborough melodrama of the same name, filmed in 1945 with Margaret Lockwood, James Mason, and Michael Rennie in roles played in the remake by Dunaway, Alan Bates, and Oliver Tobias. Director and co-writer Michael Winner adored the original and long wanted to remake it, finding his chance when his first movie for exploitation company Cannon Films turned a $10 million-plus profit: Death Wish II, the terrible 1982 sequel to the far superior 1974 original, which Winner also directed.

Intriguingly, The Wicked Lady received reviews as positive in Britain as they were negative in the U.S. It's an oddball movie quite unlike anything released in America at the time, leaving critics nonplussed by its deliberately campy, bawdy approach, exemplified by Dunaway's wild-eyed, flamboyant performance, one not far removed from her previous film work, as Joan Crawford in the similarly reviled Mommie Dearest (1981).

Viewed with the right frame of mind, The Wicked Lady is an unexpectedly enjoyable viewing experience: lush and lusty, darkly humorous, frequently ridiculous, and boasting an excellent cast, all of whom get into the spirit of its unusual approach. 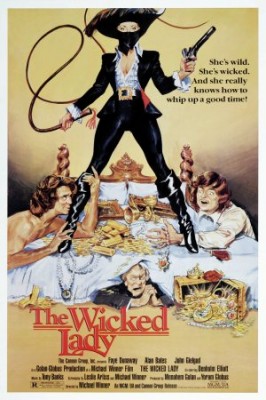 In late 18th century England, Caroline (Glynis Barber) is about to wed wealthy landowner and magistrate Sir Ralph Skelton (Denholm Elliott), but her duplicitous older friend Barbara (Dunaway) steals his affections and he instead marries her at the last-minute. At their wedding reception, Barbara sets her sights on another man, handsome Kit Locksby (Oliver Tobias), but by now it's too late and, besides, he's more interested in Caroline.

After Barbara's sister-in-law, Lady Henrietta Kingsclere (Fawlty Towers' Prunella Scales), humiliates Lady Skelton in a game of Ombre, losing her mother's ruby brooch in a coup de grâce, Barbara impulsively decides to steal it back, slipping out of her bedroom through a hidden stairway and masquerading as the notorious highwayman Captain Jerry Jackson (Alan Bates).

This dangerous act of villainy intoxicates her, and she continues impersonating Jackson until the famous bandit himself intercepts in the middle of one of her coach robberies. The two become lovers and she, rather than he, pushes them toward bolder, more lucrative acts of thievery.

Less self-conscious and obvious than overrated Best Picture winner Tom Jones (1963), The Wicked Lady is a strangely beguiling concoction, blurring the lines between straight costume melodrama and amorous high camp. Alan Bates, for instance, plays Jerry Jackson as a classically swashbuckling antihero and is so good in the part, especially during a monologue he delivers to throngs of admirers late in the picture, that one wishes he had done many more films of this type. Conversely John Gielgud, playing Hogarth, the Skeltons' pious Christian butler, in "getting" Winner's approach to the material, wildly overacts, his readings of even the most innocuous lines hilariously, mellifluously overdone.

As for Dunaway, watching her is very nearly like watching Dunaway playing Joan Crawford playing Lady Skelton, in a performance akin to Crawford's in Johnny Guitar (1954). Though probably a mistake in terms of her credibility as an actress and long-term career goals, she rather bravely doesn't hold back in the slightest: she's wild-eyed and with every gesture broadly theatrical. Outwardly it seems to be a truly terrible mistake on her part, yet it's entirely in keeping with the rollicking, lusty tone of the production.

The film is darkly amusing, acknowledging the violent cruelty of the Restoration, with poachers habitually hanged and their corpses left to rot as a warning to others. Conversely, the film is amusingly sexually explicit; it more than earns its "R" rating. There is, for instance, a parade of topless, inevitably well-endowed maidens in practically every reel. One of these is Jackson's girl, played by a pre-Star Trek: The Next Generation Marina Sirtis, who in one of the film's highlights, engages - topless, naturally - in a brawl with Dunaway complete with cracking whips.

The $8 million production is attractively lush with particularly colorful period locations, costumes (by John Bloomfield, The Bounty), and wigs for both sexes. Cardiff's camerawork is often exceptional, though Winner directs with an overabundance of zooms and endless tracking shots, so much so that one wonders if the camera crew were being paid by the mile.

The Wicked Lady's 1.85:1 1080p transfer has somewhat dirty title elements but the rest of the picture boasts a notably clean and detailed image with excellent color. The DTS-HD mono (English only, with optional English subtitles) is strong, and the disc is Region A encoded.

The lone supplement is a trailer, also in 1.85:1 widescreen and high-def.