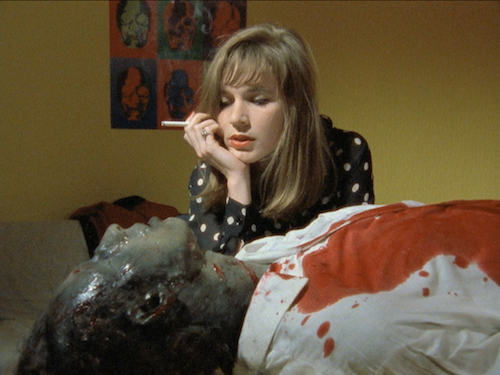 Yes, yes, clearly I am one sick puppy. I had a frickin' ball during most of Nekromantik 2, Jörg Buttgereit's gory, button-pushing horror-romance from 1991 that was briefly banned in its home country of Germany. It helps to have a taste shaped not only by trash masterpieces like the works of John Waters, Frank Henenlotter, or Troma, but also European art cinema like Chantal Akerman's Jeanne Dielman... or the many provocations of Michael Haneke, because the film manages to tap into both of those modes of filmmaking. While Nekromantik 2 is noteworthy for its stomach-churning body horror and depraved characters, Buttgereit is no slouch in the plot department, using his extreme subject matter to comment on the generally twisted nature of romantic relationships.

Now, I have not caught up with the original Nekromantik from 1988, but from this film's opening flashback, it appears that the first film climaxes (ha ha) with the corpse-loving hero taking his own life in a torrent of blood and other bodily fluids. The sequel picks up shortly thereafter with charming female necrophile Monika (Monika M.) digging up the new corpse's grave and taking his body home for her very own. (A funny gag later in the film involves the corpse's ex-girlfriend showing up at the graveyard to do the same, only to find she has been beaten to the punch.)

Monika makes the corpse a new part of her life, but has trouble not losing her lunch when she decides to get intimate with her new dead beau. The dead body is clearly a prop, but it such a well-made prop, constantly oozing gooey fluids, that it's doubtful a viewer can ever get desensitized to its disgustingness. It makes a bit of sense then that when a living man named Mark (Mark Reeder) takes an interest in her, she decides to give that a go and dumps the dead guy. Literally. Back into his grave. After saving a few choice body parts that she could never... uh... part with.

For something so outrageous and low-budget, the filmmakers' approach to audience manipulation is beautiful: just a masterful blending of contemplative moments, comedy, brain-searing gore (including a non-staged animal autopsy scene made uncomfortably funny by Monika's insistence on eating a sandwich while it happens), and even a touch of sweetness. I found myself viscerally engaged with this film, giggling and gagging in equal measure. I applaud the actors for their willingness to get so gross while creating believable characters.

As the prior reviews on this site clearly indicate, Nekromantik 2 is a polarizing movie. If you're a gorehound like Kurt Dahlke [his review of this disc], then you might have just hit a rarefied jackpot. If you've got more of a squeamish vibe about you like Don Houston [his review of the DVD version], then you might just hate it. I lean more toward the former reaction, just because the film left me bewildered and exhilarated. Hopefully, you know your taste. Proceed accordingly. 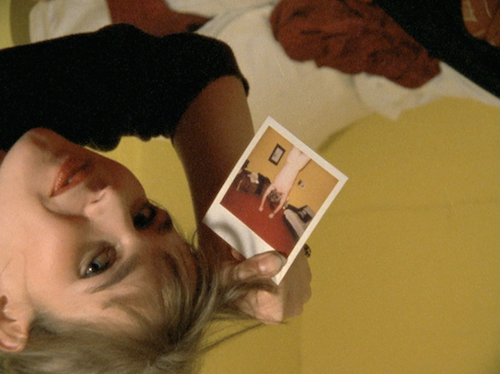 The Video:
Considering its low-budget origins on 16mm stock, this AVC-encoded 1080p 1.33:1 transfer is surprisingly strong overall. The image is grainy but clean for the most part; shots with dissolves and optical effects look dupe-y and sport noticeable dirt. The color is strong, even though the film doesn't look like it was designed to "pop" aesthetically. Detail is hit-and-miss, but satisfying overall. I only noticed a few isolated shots with digital compression issues.

The Audio:
No lossless options, but the disc offers the original Dolby mono, plus remixed Dolby 2.0 stereo and Dolby 5.1 surround options. Since the movie is principally music driven, any of these choices are enjoyable and viable. The 5.1 does palpably provide the most ambience, but both remixes sound as though they were pitched down a little bit (a sample rate issue?). The dialogue is in German, with optional English subtitles.

(HD, 1:36) - A delightfully deadpan intro in which the director briefly discusses how the film was banned in Germany and how it is important remember that the film is a love story, not a horror movie.


Final Thoughts:
Even if your taste in movies veers toward the extreme, there's still a good chance you will be shocked and disturbed by Nekromantik 2. It also offers more than a few twisted belly laughs. Cult Epics has offered up a surprisingly good video transfer and a wealth of truly worthwhile supplements. (Sure, it would have been nice if they could have wrangled at least one lossless audio track, but I digress.) If you're the kind of person who looks at the unsettling decapitation image on the video box and wants to know more, this release comes Highly Recommended. 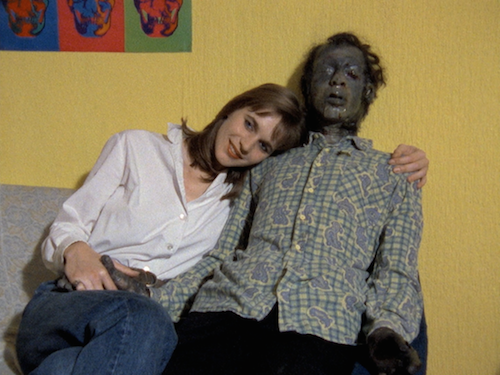