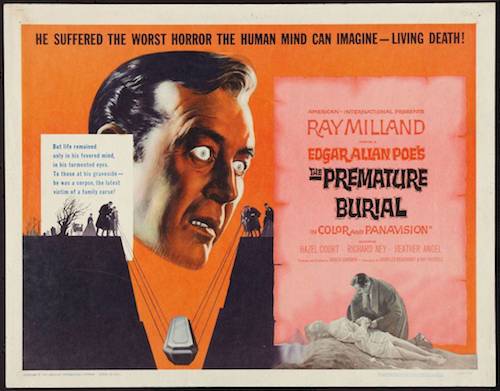 Of the eight Edgar Allan Poe adaptations that Roger Corman directed between 1960 and 1964, 1962's The Premature Burial is often considered the odd man out. It is the only film in the series not to star beloved bogeyman Vincent Price, because Corman decided to make this film independently and Price was under contract to Corman's old partners, American International Pictures (AIP). The irony, of course, is that AIP decided that they wanted to stay in the Roger Corman business and bought out the film's financier so that Premature Burial would remain in the family, so to speak. AIP put out The Premature Burial and the five Poe films that followed.

With Price out, Ray Milland was cast as the lead instead, and he more than suitably fits the bill. He might be a bit long in the tooth to be playing medical student and artist Guy Carrell, but atmosphere consistently takes priority over logic in this film anyway. What matters most is that we believe Milland's Guy is truly haunted by the fear that he will be buried alive, in the midst of a cataleptic fit so severe that he will be mistaken for dead. To his friends and loved ones, this fear is utterly unfounded. Guy has never shown symptoms of catalepsy, an affliction which makes the sufferer unable to move and (as far as this story is concerned) can even slow body functions down to an imperceptible crawl. Guy believes his father was buried alive, and that he heard his dad cry out from his tomb, though Guy's old maid sister Kate (Heather Angel) claims it was all a hallucination. Guy's medical chum Miles Archer (Richard Ney) tries to point out that, even if his story was accurate, catalepsy isn't hereditary.

It doesn't matter. Guy is inconsolable. Even his new marriage to the beautiful Emily (Hazel Court) won't take his mind off of what he presumes to be his unavoidable fate. He builds himself a burial chamber specially designed with around half a dozen escape hatches, only to have a terrible nightmare -- shown with gloriously psychedelic color effects and only Ronald Stein's musical score on the soundtrack -- in which every escape tactic fails on him. Guy tries to shake loose his superstition for the sake of his marriage, but he keeps having haunting visions of grave diggers out on the foggy moors and living things trapped in tight spaces against their will. Is it all in his mind? Or is one of his close companions gaslighting him?

I watched The Premature Burial with some friends, and we all had a few good chuckles about some of the overripe dialogue, the bad logic of some of the plotting, and the overly foggy exteriors which are clearly shot on a pretty small soundstage. But despite its many hokey elements, the film still won me over easily. Though this was clearly a low-budget production, you can feel Corman and his crew making an effort to make something good with what they have. The splendidly mercurial performance by Ray Milland holds the film together despite many of the bumps in the narrative. From the moment that the wrongful burial promised in the title finally occurs all the way up to the film's unexpected climax, I was completely sucked in and having a ball.

The Premature Burial isn't a great movie, or even a particularly scary or shocking one either. Yet it is never boring and tells its simple story with flair. Considering the effectiveness of most low-budget horror movies, that's an achievement.

The Video:
There's a lot to like about Kino Lorber's AVC-encoded 1080p 2.35:1 presentation. The transfer is vividly colorful and mostly clean and stable, with a satisfying film grain look. The blacks are typically quite inky, with good shadow detail. There are a few random shots within the film that look slightly discolored, or the blacks start to get a little milky. I'm assuming that second- or third-generation film materials must have been plugged in to fill gaps at these moments. These specific shifts were drastic enough that I assumed that dissolves were imminent, but then dissolves never came. It's not a constant issue, but it occurs multiple times sporadically throughout the film.

The Audio:
The DTS-HD MA 2.0 audio mix is relatively short on atmosphere, but it handles the dialogue quite nicely, as well as the music and occasional spooky effects (oh! that infernal whistling!!). No subtitles.

(HD, 9:48) - A new interview with director Joe Dante (Gremlins) about this film, in what is essentially an entertaining appreciation piece. Dante recalls what it was like seeing this movie as a kid and compares it to the other Corman-Poe films. He also talks a little bit about Corman's reticence to bring up his '60s directing work when Dante later worked with him in the '70s.

Final Thoughts:
A minor macabre treat gets a solid A/V upgrade. If '60s-era spookiness is your bag, then this release comes Recommended.