To Sir, with Love

Twilight Time // Unrated // February 10, 2015 // Region 0
List Price: $29.95 [Buy now and save at Screenarchives]
Review by Stuart Galbraith IV | posted March 9, 2015 | E-mail the Author
To Sir, with Love (1967), with neophyte high school teacher Sidney Poitier trying to bring order and inspiration to a classroom of rebellious teens from London's East End, is a seriously flawed but ultimately admirable movie. I thought it just barely okay when I first saw it decades ago, but compared to the mostly awful "inspirational teacher" films made since (Dead Poet's Society, Dangerous Minds, Mr. Holland's Opus, etc.) To Sir, with Love's problems now seem comparatively minor. Sentimentality is held in check, if still present, while Poitier's excellent performance is likewise understated and reserved.

Shot apparently in late 1965 and/or early 1966, Columbia Pictures had little faith in the film, holding its U.S. release back until June 1967, eight months after its UK premiere. For this reason, three of Poitier's biggest and most enduring hits ended up getting released within months of one another, the others being In the Heat of the Night and Guess Who's Coming to Dinner. The modest To Sir, with Love ($640,000) grossed $42.5 million; the $2 million In the Heat of the Night took in $24 million, while the $4 million Guess Who's Coming to Dinner made $70 million worldwide. Poitier, clearly, was a "magical Negro" (a term coined by his detractors) in more ways than one.

Twilight Time's Blu-ray is mostly terrific. The video transfer is on the grainy side, particularly during the opening titles and montage sequences, but markedly improves upon the earlier DVD. Moreover, it includes scads of extra features, including several very good mini-documentaries filmed in 2011 but released for the first time here. 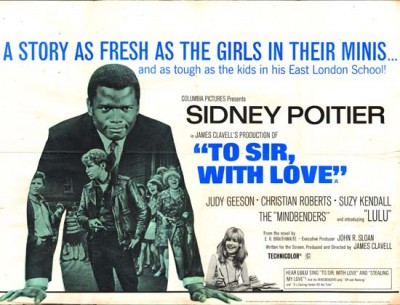 Adapted from E.R. Braithwaite's semi-autobiographical novel (set in earlier postwar London), Poitier stars as Mark Thackeray, a native of British Guyana who spent several years in California (to account for his American accent). Trained as an engineer, he's been unable to find work in that profession, so instead he accepts a teaching position at the North Quay Secondary School in London's East End, populated by troubled teens kicked out of other programs.

Filling out the term vacated by a teacher who had thrown in the towel, Thackeray finds his pupils openly, gleefully defiant. Led on by delinquent Bert Denham (Christian Roberts) and pretty Pamela Dare (Judy Geeson), the kids are disrespectful and endlessly disruptive. Veteran teacher Theo Weston (Geoffrey Bayldon) has completely given up on his students, whom he calls "the great London unwashed." Another teacher whose name sounds like a Bond girl, Clinty Clintridge (Patricia Routledge), urges Thackeray to ignore Weston's eternal pessimism and offers words of encouragement, while another new teacher, Gillian Blanchard (Suzy Kendall), admits to being frightened of her charges.

A crude, childish prank finally causes normally calm, determined Thackeray to lose his temper: one of the girls mischievously tosses a used sanitary napkin into the classroom's coal-burning stove, creating a stench. However, Thackeray's outrage results in an epiphany: He decides to start treating his students as adults rather than children. After theatrically dumping his textbooks in a wastebasket, he announces a new policy of mutual respect.

The key to To Sir, with Love's success is that, 1) though sentimental it never succumbs to the kind of overwrought melodrama so common in films of this type; and, 2) it's primarily a story about economic class rather than one about race. In both In the Heat of the Night and Guess Who's Coming to Dinner Poitier's race is in the foreground, but here it's a secondary issue. When the white mother of half-black Seales (Anthony Villaroel) dies, Thackeray's students collect money to send flowers and a wreath but inform "Sir" that they won't be attending the funeral because of the scandal that would ensue by their showing up. He's wounded, but simply moves on.

Mostly though, the raised-in-poverty Thackeray serves as a positive role model for these kids, students who through Britain's then-rigid class system were pretty much doomed to low-paying, working class jobs. (Though, as someone points out, far better-paying than a teacher's salary.)

Is To Sir, with Love honest in its depiction of these students and their school environment? I didn't think so the first time I saw it, but after years of watching wholly British-made films from the period with similar settings, especially the first two "Up" documentaries (1964's Seven Up! and 1970's 7 Plus Seven), To Sir, with Love admirably seems credible most of the time. Considering the sea change of fashion and hairstyles during just 1965-67, those aspects come off as more believable when one realizes that it was made nearly two years prior to its summer 1967 U.S. release. That also meant that, except for then 22-year-old Roberts, the cast was composed of real teenagers all around 17-18 years old. Further, as noted in the supplements, the actors playing the students wore street clothes they chose themselves rather than studio-manufactured costumes.

Poitier, too often assessed as a symbol than as an actor, is wonderful as Thackeray. He's effortlessly charismatic and has the patience of a saint, but it's also apparent that this patience is sorely tested. With good reason at times he looks ready to snap and throttle the kids. Thackeray tries hard to teach his students something valuable but, believably, becomes frustrated that he doesn't seem to be making any progress. And all the while he's looking to get out, to find a job better suited to his engineering background.

Critics point to Poitier as cinema's emblematic "magical Negro," the unimpeachably perfect black man - handsome, polite, intelligent, safe - reassuring white folk that he exists only to make their lives better. But with minor alterations Thackeray is a character that could just as easily have been played by an Asian, Indian, or white actor. Thackeray is neither an idealized black man nor an idealized, self-sacrificing educator. He's just an innately talented teacher, something even he doesn't realize until the end.

To Sir, with Love does fall short in what it doesn't show. Except for a brief P.E. sequence, lorded over by a typically militant gym teacher, Thackeray's methods are never contrasted with the efforts of other teachers. The audience is left wondering how Miss Blanchard and Ms. Clintridge are getting along in their classrooms but not once does the movie ever show this. The headmaster (Edward Burnham) gives Thackeray free reign to run the classroom as Thackeray sees fit, but would the headmaster really have approved of Thackeray trashing textbooks and allowing free-form discussions about "love, sex, death, rebellion … anything you want?"

There's also something uneasy about this teacher-as-life-coach conceit. His students are shown to be barely literate, but nothing Thackeray does later seems to be addressing this considerable problem at all. He doesn't pretend to have easy answers to all of their questions, but isn't such worshipfulness a dangerous thing?

That last question is at least partly answered in the film, when Thackeray says goodbye to Pamela. For more than half the film she's had a passionate schoolgirl crush on him but, as they say their farewells, there's a clear implication that she's outgrown it, while still respecting him. Scenes like this one lift To Sir, with Love well above the sickly-sweet syrup line similar movies find themselves mired in.

To Sir, with Love is shrewdly made in myriad ways. For starters, there's the inclusion (four times!) of the iconic title song, sung by Lulu, who also plays one of the students. Beyond that, the film is extremely well-cast, especially Judy Geeson who, at this early stage in her career, seems to have been helped by her striking resemblance to then red-hot Julie Christie. Only Lynne Sue Moon, who made a strong impression in Nicholas Ray's 55 Days at Peking (1963) is wasted. The veteran or emerging adult actors playing teachers or East Enders (Bayldon, Routledge, Marianne Stone, Rita Webb, etc.) also are all fine.

Epic novelist and occasional screenwriter James Clavell directed To Sir, with Love. He does a great job eliciting uniformly understated performances from his cast. He was a better than decent director whose films, particularly the excellent The Last Valley (1970), deserve more attention.

In 1.85:1 widescreen, To Sir, with Love's 1080p transfer is fairly grainy throughout. The opening titles look pretty terrible, but the rest of the film is sharp enough that viewers are able to appreciate the nuances of the performances and the textures of the dreary classroom setting. The 1.0 DTS-HD Master Audio is unusually strong, apparent during those multiple renditions of the title song, which comes off quite well. English SDH subtitles are included. As with other Twilight Time releases, this is a limited edition release of 3,000 units, so be warned.

In addition to Twilight Time's usual isolated score track (this time for Ron Grainer's interesting score), trailer, two audio commentary tracks (one with Geeson, the other with Braithwaite and educator Salome Thomas El), and liner notes by Julie Kirgo, there are featurettes apparently created for an aborted (?) Columbia video release. These include "E.R. Braithwaite: In His Own Words," "Lulu and the B-Side" (she looking far more attractive and, incredibly, almost younger than she does in the film), "To Sidney with Love" (a testimonial by his agent), "Miniskirts, Blue Jeans, and Pop Music," and "Principal El: He Chose to Stay." All these are well done and informative.

Imperfect but a guaranteed crowd-pleaser, featuring charismatic Sidney Poitier delivering one of his most beloved performances, To Sir, with Love is a mostly-good movie buttressed by excellent special features. A DVD Talk Collector series title.